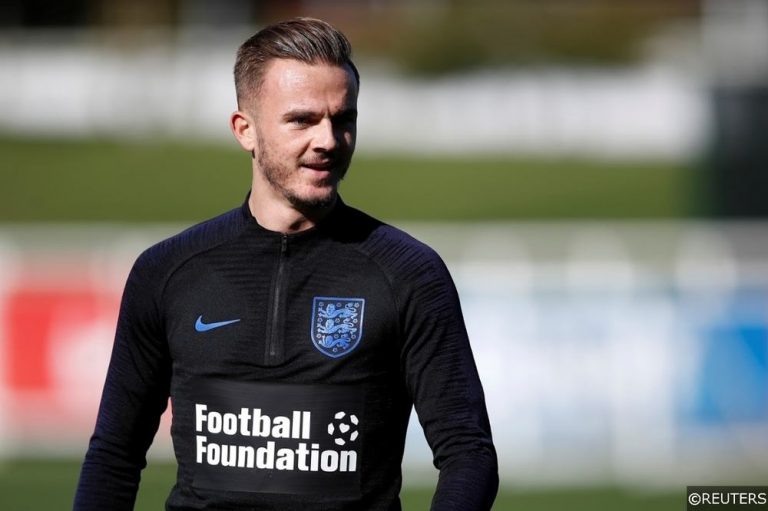 In the coming days, a number of international level greenhorns will be hoping to take their first steps towards national team stardom in the impending Euro 2020 qualifiers.

Here’s our rundown of some of the most exciting uncapped players hoping to win their first caps this week:

Promising Leicester City midfielder James Maddison will be hoping it’s third time lucky this week, as he aims to make his senior England bow against either the Czech Republic or Bulgaria.

The creative technician was already called up by Gareth Southgate on two previous occasions, however much to the the 22-year old’s frustration, Maddison failed to make it on to the pitch either time.

However, after an impressive start to the 2019/20 Premier League season, Maddison now looks ready to make his mark on the international stage, and the nine times capped U21 star is almost certain to feature in some capacity.

The Three Lions are aiming to maintain their 100% Group A winning record in Prague this week. Read our expert’s Czech Republic vs England predictions in their detailed match preview.

It’s been a whirlwind week for Brighton’s teenage sensation Aaron Connolly. The 19-year old arrived in explosive style in the Premier League at the weekend, marking his debut in the competition for Albion by netting twice against Tottenham Hotspur at the Amex Stadium.

Less than 24 hours later, Connolly was drafted into Mick McCarthy’s Republic of Ireland squad for the country’s fixtures against Georgia and Switzerland – and the youngster looks ready to be thrown straight into the deep end.

Connolly has represented his country with great success from U17 level right through to the U21s, hitting nine goals in 21 appearances in total for Ireland’s underage sides.

22-year old left-back Sergio Reguilón has been in excellent form for La Liga side Sevilla in the first two months of his year-long loan from parent club Real Madrid.

The tough-tackling youngster is cut from the cloth of the archetypal modern fullback, combining a robustness in defence with a willingness to get forward.

Reguilón ranks second at Sevilla for average dribbles completed per game this season (two), and the promising defender’s dynamic forays into enemy territory are sure to have caught the eye of Spain boss Roberto Moreno.

Reguilón and his Spanish teammates travel north to Oslo for their latest Euro 2020 qualifier this week. Read our Norway vs Spain predictions in our match preview now.

It’s been an incredible few months for 26-year old Napoli defender Giovanni Di Lorenzo. The well-rounded right-back had flown under the radar for much of his early career, but an €8m summer move from Empoli to Napolli triggered a meteoric rise in his career trajectory.

Di Lorenzo has been performing well in Serie A since his switch to Naples, though his outstanding displays for the Partenopei in the Champions League were the driving force behind his call-up to Roberto Mancini’s squad.

Now Giovanni Di Lorenzo, who won three caps for his country at U21 level between 2013 and 2014, looks set to feature for Italy at senior level for the first time in their games against Greece and Liechtenstein this week. Read our Italy vs Greece betting tips to see our expert’s predictions for the game.

Luca Waldschmidt made headlines in the summer for his goal-scoring exploits at the European U21 Championships in Italy.

Waldschmidt hit an incredible seven times to help fire Gemany to the U21 title, breaking the record for most goals scored in a single tournament that was previous held by his compatriot Pierre Littbarski since 1982.

The 23-year old has carried his good form into the 2019/20 club season, netting four goals in four Bundesliga starts for Freiburg – a haul that was impressive enough to earn him a place in Die Mannschaft’s squad.

Having missed out on minutes when called up by Joachim Low in August, Waldschmidt will be hoping to make his debut for Germany against either Argentina or Estonia this week.

Read our Germany vs Argentina match preview to see our betting tips for this week’s glamorous international friendly now.

Even though combative Bournemouth midfielder has been performing at a high level in the Premier League for over two years, the 23-year old’s displays had largely ignored by Denmark Manager Åge Hareide until last week.

The Danish U21 regular, who turned down a chance to represent Nigeria at senior level last year, was finally drafted in Denmark’s senior setup for their games against Switzerland and Luxembourg – and Billing has the skillset to thrive at full international level.

Billing ranks second at Bournemouth this season for average tackles and interceptions made per Premier League game, and his ability to break up play and close passing channels should make him a useful asset for Denmark.

Denmark have their most important qualification fixture of their campaign to date on Saturday. Make sure to read our Denmark vs Switzlerand betting tips for the game now.

Switzerland are expecting big things from their highly-rated and highly-coveted defender Eray Cömert over the coming years, and the 21-year-old Basel wonderkid has all the tools he needs to deliver.

The cultured centre-half has been building a reputation for himself in the Swiss Super League, and after some promising performances on the continent for his club, many of Europe’s bigger names, including Premier League pair Arsenal and Everton, are rumoured to have made him a transfer target.

Cömert has been in the Swiss international football system for a large chunk of his career, representing his country at every level upwards from their U16s, now the defender looks set to complete his transition to the men’s team against either Denmark or the Republic of Ireland.