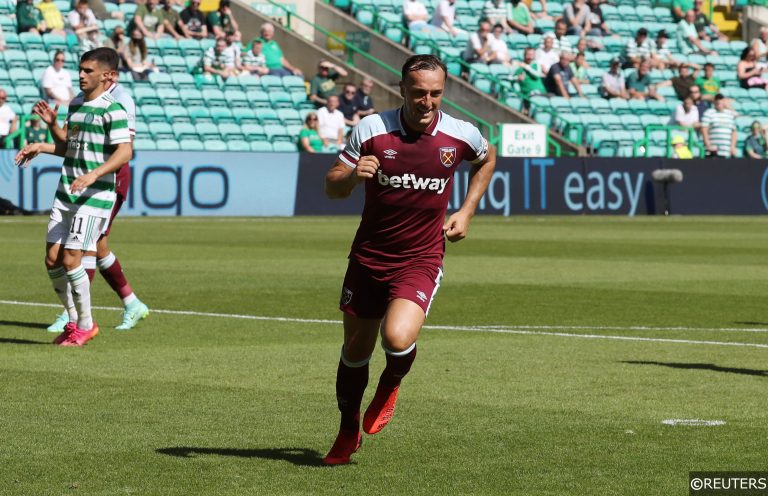 Arsenal vs Chelsea may have been the main event in the Premier League this weekend but strangely enough Monday night’s clash between West Ham and Leicester is the only fixture of gameweek two that features two teams from last season’s top six finishers.

The Hammers were involved in a six-goal thriller at St James’ Park last weekend and with Leicester beating Wolves this clash looks balanced on a knife edge.

With our eyes firmly fixed upon Monday’s offering, we’ve scoured the markets to build a massive 71/1 Bet Builder.

Since David Moyes took over for the second time only Manchester City, Liverpool, Chelsea and Manchester United have a better attacking record than West Ham and their 4-2 win over Newcastle last weekend showed they are a huge threat.

They won 19 of their 30 games against teams outside the top four last season and beat Leicester both home and away. They have won three league games in a row and while Leicester did beat Wolves last weekend they were more than a bit fortunate to come away from that with all three points.

We’ve already discussed West Ham’s impressive attacking stats but Leicester are no slouches in front of goal, either.

They had the third-best goalscoring rate in the Premier League last season, but defensively they did struggle at times and with both teams scoring in each of their last seven league away days I can’t see them keeping the Hammers at bay.

Jarrod Bowen put in an impressive display against Newcastle last weekend, generating 0.43 xG from his two efforts, and the West Ham attacker has an excellent record against Leicester.

The 24-year-old found the net eight times in the league last season and two of those came against the Foxes, with him scoring both home and away against Brendan Rodgers’ side.

Tomas Soucek to have 1+ shot on target

Tomas Soucek was one of the breakout stars in the top-flight last term and the West Ham midfielder is a huge threat in the opposition box.

He attempted four shots against Newcastle last weekend and found the target with one. Looking back to last season he has now tested the keeper in four of his last six Premier League appearances, attempting 19 shots in total.

Wilfred Ndidi to be booked

Leicester’s midfield destroyer will have his work cut out on Monday as he tries to keep a talented West Ham midfield at arm’s length and the Nigeria international is no stranger to the referee’s bad books.

Four of Ndidi’s six bookings last season came away from home and with three yellows in his final five away appearances last season he could find himself in trouble on Monday.