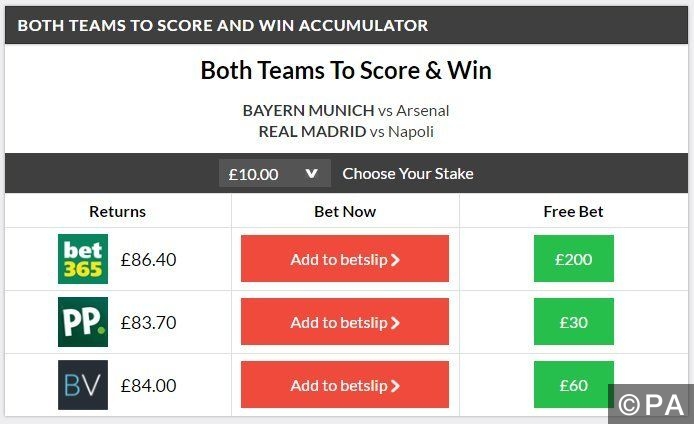 BOOM! Another day, another acca win for us!

Less than 24 hours after our impressive 23/1 Match Goals Accumulator came in, our tipster continued their hot streak with a solid 8/1 Both teams to score & Win Double.

We have daily pre-match tips on Football and they can be found on our website under the Football Tips tab. They’re posted every night at 10 pm, through the week and including weekends.

Just like the on Tuesday night, both games on our double started at the same time at 7.45 pm. And just like on the 23/1 Acca winner, both games came in relatively early and easy.
First up it was Bayern at home who entertained Arsenal and since there’s always goals between these two sides our tipsters had no problems going for BTTS & Bayern win. The Bavarians got off to a solid start and took the lead through Robben in the 11th minute. But the Gunners didn’t give up and managed to level the score around the half hour mark as Alexis Sanchez scored.
Things looked good for Wenger and his boys, but only until the 53rd minute when Lewandowski gave the Germans the lead again.  It was all Bayern Munich after that goal as they scored another 3 goals in the remaining 35 minutes to ensure a huge 5:1 lead heading into the return leg at the Emirates in two weeks.

The 2nd leg of our Double didn’t start well for us as Napoli took a shock lead at the Bernabeu in the 8th minute through Insigne who caught the Madrid defense asleep.
The defending champs didn’t lose their composure and continued playing their game. It quickly paid off as Karim Benzema converted on a low cross from Cristiano Ronaldo in the 18th minute to level the score for the home team. Despite their best efforts to pull ahead in the first half, Madrid failed to do so and we went into the break with the score tied at 1:1. The Spaniards picked up where they left off right at the start of the 2nd half. Napoli couldn’t handle the pressure and two goals from Toni Kroos & Casemiro gave Madrid a comfortable 3:1 lead which they were able to sustain until the final whistle.

The total profit on the BTTS & Win Double was a little over £76 and it was our 2nd Footy Accumulator winner in the last 48 hours.

A big number of followers sent in their Accumulators after the final whistle was blown and here are some of them:

@FootySuperTips i bloody was! After a crap day of betting i needed it, and im drunk. Happy bloody days! pic.twitter.com/1lAvEd6cII