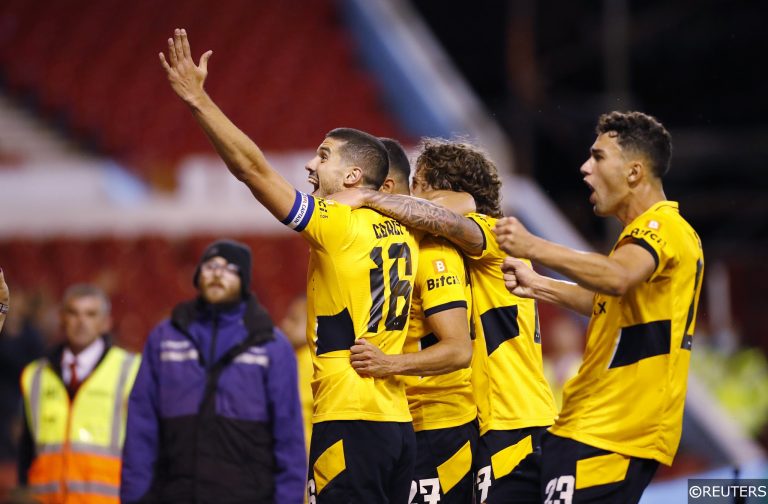 Tuesday evening saw a mammoth EFL Cup fixture list coincide with three Champions League playoff ties and our tipsters used their knowledge to great effect as they landed five football winners and followed it up with an overnight winner in the MLB.

Our 9/1 accumulator was the star of the show on Tuesday night but it was far from the only success our tipsters saw. Let’s take a look at how everything went down!

9/1 accumulator lands in the EFL Cup!

Norwich’s tie with Championship side Bournemouth was the first leg of our acca to kick off and it didn’t take long at all for us to put a tick in that column, with the Canaries storming to a 3-0 lead by half-time and adding another three after the break.

The next three legs were just as straightforward, with both teams finding the net by half-time in Huddersfield and Stoke taking a first-half lead against Doncaster before adding a second just after the break. Our final kick off in Nottingham looked a bit edgy at the break as the game remained goalless, but Bruno Lage’s Wolves turned on the style in the second-half with a four-goal haul. Easy stuff!

Sky Sports Main Event’s billing on Tuesday night took us up to the north-west as Aston Villa visited League Two outfit Barrow, with a heavily rotated Villains having a pretty easy time of it at the Dunes Hotel Stadium.

It took just ten minutes for teenager Cameron Archer to open the scoring and 14 minutes later Anwar El Ghazi made it 2-0 with an audacious panenka penalty before shushing the home crowd. A second from El-Ghazi just before half-time sealed our Aston Villa to be winning at half-time leg and pretty much had our Aston Villa -1 handicap leg in the bag.

A lack of attacking threat from the underdogs meant our BTTS – No leg was rarely in doubt and the final piece to our bet-building puzzle – under 9.5 corners – landed with ease as Aston Villa failed to win a single corner kick.

Want a look at today’s offering? We’ve got a 29/1 Bet Builder lined up for West Brom vs Arsenal!

It was an evening for goals in both the EFL Cup and the Champions League playoffs and that brought success to all our BTTS backers out there, with two bets at 9/2 apiece landing!

There’s really not much to say about this after it landed with such conviction. Two of the three legs – Huddersfield vs Everton and Ludogorest vs Malmo – were already in the bag by half-time and the Brentford vs Forest Green game was looking promising after just eight minutes, when Forest Green took a shock lead. We were made to wait until the hour mark for the Bees to get going, but a three-goal haul in the final half an hour was more than enough to leave us happy.

Our 9/2 BTTS & Win best bet focused on Ferencvaros vs Young Boys in the Champions League and once again it took just 18 minutes before both teams had found the net. A 2-1 lead for Ferencvaros in the first-half had us a bit worried, but they equalised shortly after the break before the Hungarians had a man sent off. After that it was just a matter of time and the winner finally came in the 90th minute from 20-year-old Felix Mambimbi.

Bet of the Day winners plus plenty of prediction success!

The winners kept flowing late into the night on FST, with Wolves’ comprehensive win over Nottingham Forest landing our Bet of the Day for the second day in a row before our attentions turned stateside as we looked for a third MLB Best Bet winner in a row.

Once again, there was no sweat to be had here as the LA Angels stormed to a 14-8 win over Baltimore Orioles to make it three in a row!

A final shoutout has to go to our football prediction writers on Tuesday, who landed nine of their 11 main football tips for a total profit of 13.2 units off the singles alone! After Monday’s prediction success, that takes our total profit for the week up to an impressive 19.3 from just 18 tips!