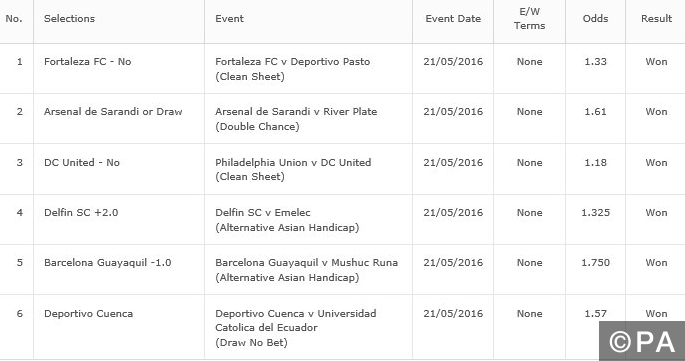 Our Overnight tipster has done it again, yet another winning Accumulator, this time it came in at 9/1. This is now our FOURTH overnight acca wins in 10 days, an incredible feat. Our other wins included our 8/1 Acca on the 15th May, 6/1 winner on the 12th May, and 8/1 winner on the 11th. Reports on all these successes can be found here

Our Accumulator got off to a flyer as Arsenal de Sarandi opened the scoring in the 1st minute, Although River plate scored from the penalty spot early into the second haolf Arsenal were in total control throughout the game and made 100% that leg 1 would land thanks to a late winner from forward Vuletich.

Our next 2 legs were slightly nervy, we only needed 1 goal each from Deportivo Pasto and Philadelphia Union, It took Deportivo Pasto till the 84th minute to find the net but it took Philadelphia even longer, After missing several glorious chances including an open goal, their persistence was rewarded as they found the net with a fine strike in the 91st minute. Half the accumulator had now landed.

Next up was Delfin from Ecuador, we tipped +2 Asian Handicap which meant they needed to win, draw or lose by 1, if they lost by 2 the leg would be void, any more and it’s a loss. Delfin kicked off this leg in sublime fashion as they scored early into their game. From then however the visitors were the better side and their class showed as early into the second half they took a 2-1 lead. Delfin however defended heroically and in the 94th minute they even managed to get themselves a shock equaliser. 4 legs down 2 to go.

The penultimate leg was Barcelona Guayaquil against Mushuc Runa and it was Barcelona by name and Barcelona by nature as they dominated the whole game and dispatched of their opponents 3-1, Runa’s goal coming from a dodgy penalty early in the first half.

The final leg saw Deportivo Cuenca play Universidad Catolica del Ecuador and this was the best game of the lot, very evenly matched throughout but the home sides class prevailed as they found the net in the 84th minute of which proved to be the winning goal and the goal that landed our 9/1 Overnight Accumulator.

Congratulations to everyone who followed and sent in their slips to us via our Twitter page. Our biggest winner was @kitson14 who bagged a huge £292.17 from a £30 stake!

@FootySuperTips great start to the weekend only put more than £10 on because of the profit from last yesterdays bets pic.twitter.com/UkGJhOc3WQ

Here are some of our other followers who sent their betslips in, some very tasty stakes here too!

@FootySuperTips get a in love waking up to making money pic.twitter.com/Pg5hB9GBHp

@FootySuperTips BOOM thanks chaps! I was 1 (Millwall) off £290 yesterday so to have an overnight win was lovely!! pic.twitter.com/3UQjCtGbLj

@FootySuperTips got on 5 minutes before it kicked off and nearly cashed out for £55 at 3:15 this morning pic.twitter.com/XcwfR582EJ

Want to join in the bookie bashing? Visit our Football Accumulator section, daily accumulators are posted at 12pm, Overnight accumulators go live around 10pm. Go check it out!