9/1 Both Teams to Score Accumulator Lands! 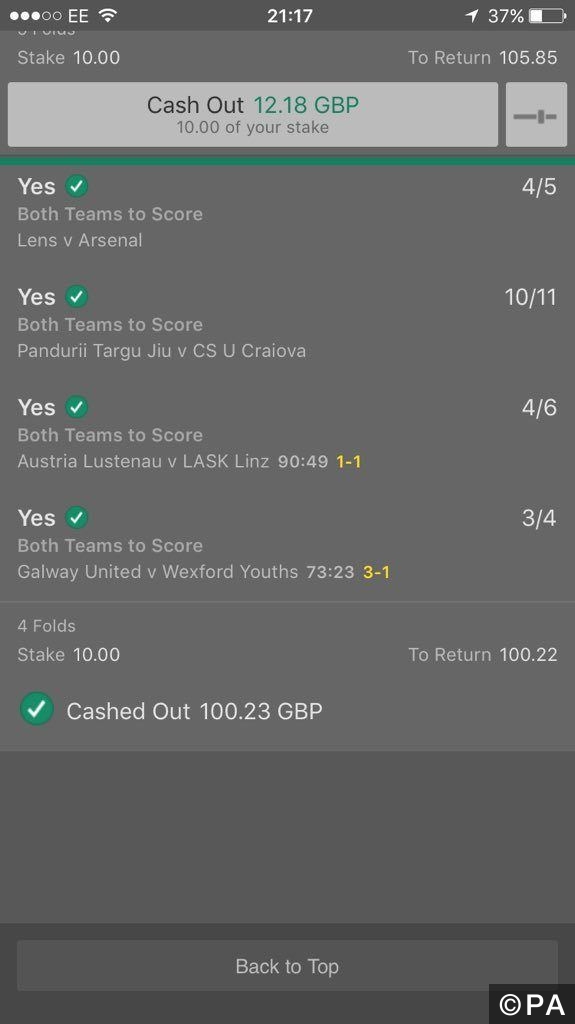 Our tipsters are well and truly on fire, They have now landed 6 acca’s in the past 10 days earning our followers a colossal amount of profit. Our 9/1 Both Teams to Score triumph is just the latest of the recent big wins that include:

This now takes our profit in this 10 day period to a huge £309, an incredible achievement by our expert tipsters.

9/1 Both Teams to Score Accumulator

First up was our friendly game as Lens took on Arsenal. Lens took the lead in the first half through French midfielder Mathias Autret. As time passed on we were looking shaky but with just 9 minutes to play Oxlaide-Chamberlain scored to land leg one of our accumulator

Our second game came from Romania as Pandurii took on Craiova. This was another nervy game as no goal was scored in the first half. The deadlock was finally broken on the 57th minute through Pandurii midfielder Ovidiu Horea who himself picked up a booking just 4 minutes prior. Craiova left it late to bag us the 2nd leg as they won a penalty in the 89th minute. They duly converted the penalty and landed leg 2 of our accumulator

The penultimate leg our our accumulator was the Irish clash between Galway United and Wexford Youths. This fixture screams out goals galore and we were spot on here as this leg landed inside 30 mins. Dunne opened the scoring for the visitors but their lead didn’t last long as Galway equalised just 2 minutes later through Gary Shanahan. Leg 3 in and just 1 more to land our Both Teams to Score Accumulator.

Last up was our shortest leg of our accumulator, the Austrian clash between Austria Lustenau and Lask Linz. The dream of a 6th acca in 10 days was slowly drifting away as the first 75 minutes passed without a goal. We always kept the faith however as the Austrian leagues are cluttered full of goals and plenty of late ones at that! Late goals we got as Lask Linz opened the scoring on the 76th minute. From then Lustenau were pushing for the equaliser for the remaining 15 minutes and their pressure finally paid off as in the 91st minute they bagged an equaliser thanks to their Brazillian forward Jailson.