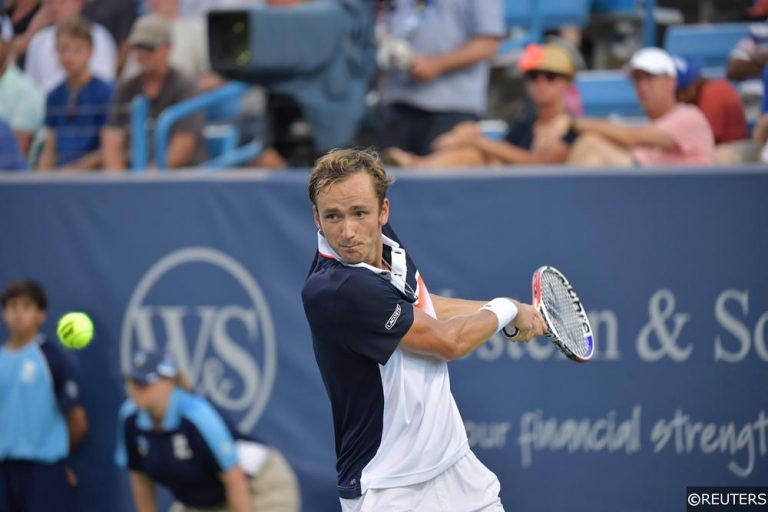 Preparations for the 2022 Australian Open have been dominated by a saga involving the tournament’s most successful men’s player Novak Djokovic.

Although included in the tournament draw, there are still some doubts surrounding Djokovic’s involvement in the first Grand Slam of the season and it makes for a compelling narrative in the coming weeks.

Djokovic aside, though, and there are a number of other players looking to make names for themselves in Melbourne with Ashleigh Barty hoping to excel in front of a home crowd, Emma Raducanu looking to build on her shock US Open triumph last year and Alex Zverev aiming to follow his ATP World Tour Finals success with a good run.

The men’s and women’s singles tournaments get underway on Monday 17 January.

One player who could capitalise if Djokovic is at any point withdrawn is last year’s runner-up Daniil Medvedev. The Russian lost to Djokovic in the 2021 final but got his revenge on the Serbian when defeating him in straight sets at last year’s US Open.

He has been dealt a fairly soft draw with 13th seed Diego Schwartzman the most dangerous player he could face before the tournament reaches the quarter-final stage.

And 2021 was a great year for Medvedev, who achieved his best finishes in all four Grand Slams.

Djokovic’s situation remains uncertain and even if he does remain involved, his preparations are sure to have been disrupted, while fellow veteran Rafael Nadal missed Wimbledon, the Olympics and the US Open last year.

That opens the door for a new potential champion in Melbourne and Medvedev, who guided Russia to the semi-finals of the recent ATP Cup and won his final game, could fit the bill.

It is a cardinal sin in betting to avoid the obvious and home favourite Ashleigh Barty looks a decent selection to win her first Australian Open title and, in doing so, become the first Australian woman to win the tournament since 1978.

She collected the second Grand Slam title of her career in 2021, prevailing at Wimbledon, and can make the most of the home crowd in Melbourne.

Barty dropped only the solitary set on her way to winning the Adelaide International recently and it is not until the fourth round of the Australian Open that she should face any serious resistance.

Naomi Osaka could be her opponent at that stage but it is worth noting she was absent for much of last season, having withdrawn from the French Open to focus on her mental health.

As strong a player as Osaka is, she could take some time to get back to her very best and Barty remains the best bet.

For those after an outside outright selection, Estonian ace Anett Kontaveit is worth chancing.

Kontaveit has looked a real threat in the Sydney International but has maintained a high level of performance since the end of October.

She claimed both the Transylvania Open and Kremlin Cup titles in the latter stages of the 2021 season and also went deep in the WTA Finals, falling at the final hurdle against Garbine Muguruza.

Her best  Grand Slam performance to date was at the Australian Open back in 2020, when she reached the last eight, and she is shaping up nicely so could go even further this time around.