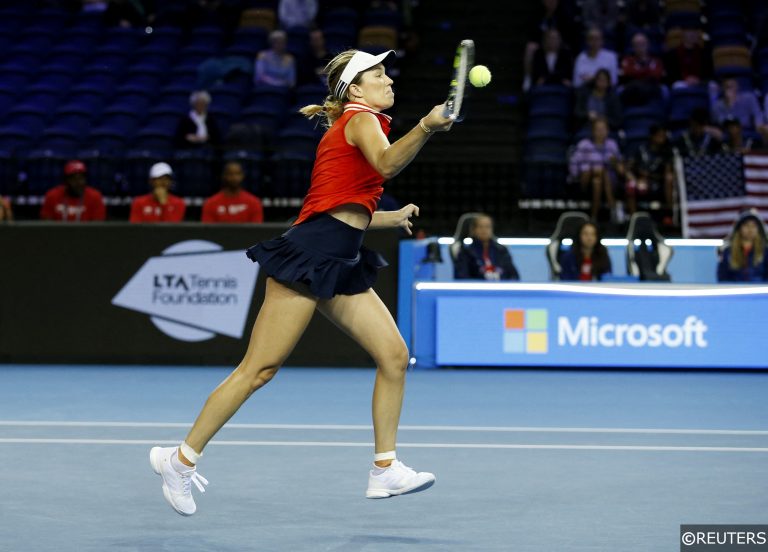 The first Grand Slam of the year is coming up this month and there’s a competitive field for both the men’s and women’s singles at the Australian Open. Ahead of the tournament in Melbourne take a look at our tips, including 16/1 and 40/1 outsider predictions!

After being forced to miss last year’s Australian Open, 21-time Grand Slam champion Novak Djokovic will be hungry to make up for lost time, and everything looks in place for the super Serb to regain his crown.

Djokovic’s chances have already been enhanced by the withdrawal of world number one Carlos Alcaraz, while defending champion Rafael Nadal has plenty to prove after losing both of his warm-up matches to Alex De Minaur and Cameron Norrie at the recent United Cup.

Not only that but Djokovic is a nine-time winner of the Melbourne major and his last three appearances in the competition have concluded with the title.

And the Belgrade boy has shown he is ready to hit the ground running again this season by scooping a warm-up event in Adelaide.

Djokovic won the recent Adelaide International with victory over Sebastian Korda in the final, but he had earlier overcome last year’s runner-up Daniil Medvedev and former quarter-finalist Denis Shapovalov in straight sets in the previous two rounds.

That shows that the 35-year-old is in the mood to deliver and with only four defeats in his last 46 matches, he is a difficult man to oppose, especially with many of his chief title rivals having plenty to prove.

However, Kyrgios has opted against a competitive warm-up competition, which tempers enthusiasm about him, while Sinner and Tsitsipas make little appeal at the current prices.

One player who could go well at decent odds is classy Canadian Felix Auger Aliassime, who enjoyed a stellar year in 2022 and is surely a Grand Slam winner in waiting.

Having lost in his first nine ATP Tour finals, Auger Aliassime found the winning habit last season as he claimed four titles, all of which were recorded on a hard court like this.

Last year the 22-year-old made the quarter-final of the Australian Open, where he had led eventual runner-up Medvedev by two sets before appearing to succumb to the pressure.

But the Montreal man appears over that mental hurdle now and should be full of belief, suggesting he could improve upon last year’s effort.

He is also a Grand Slam semi-finalist, having made the last four of the US Open two seasons ago, so only minor improvement is needed before he is battling it out for a big one.

But Swiatek has yet to win the Australian Open in four attempts and was beaten in last year’s semi-final by American Danielle Collins. This early on in the campaign, there are grounds to take the Polish star on in what is a field littered with potential winners.

Women’s Grand Slam events can throw up strange results, but there is plenty to suggest world number five Aryna Sabalenka is ready to land a first major success.

Sabalenka finished last season with a run to the final of the WTA Finals and although she was eventual runner-up to Caroline Garcia, she did record wins over Swiatek in the semi-final and Ons Jabeur and Jessica Pegula in the group-stage.

The big-hitting Belarusian has the game to bulldoze her way through any field when on-song and there has been a lot of encouragement from her early-season performances.

Sabalenka took her title tally to 11 when winning the Adelaide International last week and did so without dropping a set from her four matches.

The 24-year-old is now at the age where she should be maturing and three semi-final appearances from her last five Grand Slam starts indicates that her time may be fast approaching.

Cori Gauff is one American with a leading chance at the Australian Open but while the teenage talent has a leading chance, her compatriot Danielle Collins represents greater value.

Collins was runner-up to Ashleigh Barty in this competition last year, having silenced Swiatek in the semi-final and also claimed the scalps of Alize Cornet, Elise Mertens and Clara Tauson.

With no Barty to worry about this time around, Collins should head to Melbourne hopeful, especially considering she was also a semi-finalist in 2019.

This is, therefore, evidently a tournament the 29-year-old likes and she has shown enough in her Adelaide warm-up events to suggest she is coming to the boil nicely.

Collins was beaten in three sets by Daria Kasatkina in the first Adelaide event but she built on that with wins over Karolína Pliskova and Jil Teichmann in the second. Her quarter-final clash with Veronika Kudermetova had yet to take place at the time of writing.

So with two titles to Collins’ name and her also being a proven course performer primed to go at this time of year, quotes of 33-1 may underestimate the world number 14’s challenge.