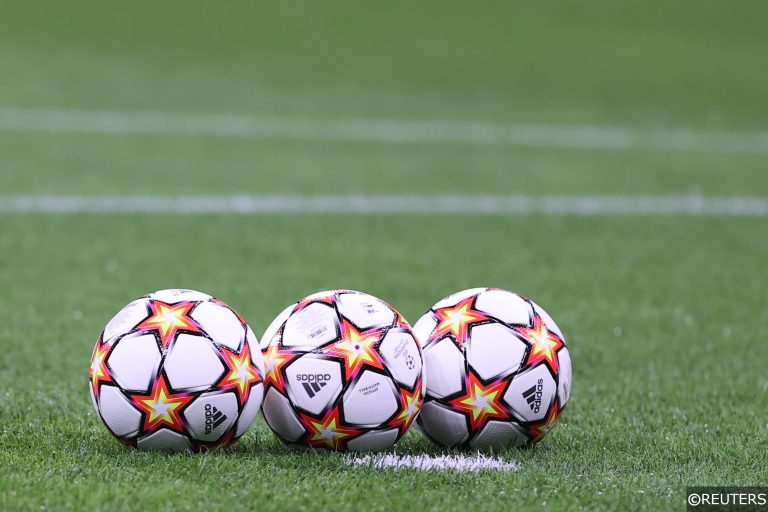 Recent seasons haven’t always brought the most competitive ties in the Champions League’s last 16, but this year looks like an exception. After a thrilling group stage, the first knockout round looks set to bring a string of evenly matched ties.

When the Champions League returns, we’ve got a mix of heavyweight showdowns and clashes between underdogs. Some big names won’t be in the last 16, while a couple of surprise sides will be.

Open games make for better odds, so this season’s last 16 accumulator comes in at a massive 110/1. Below you can back that acca and see our tie-by-tie preview ahead of the Champions League’s return.

This rematch is a reminder of one of Tottenham’s greatest nights, when they dumped Milan out of the last 16. That was an upset over a decade ago, but the tables have firmly turned despite Milan winning Serie A last term. This Milan side were outclassed by Chelsea in the group stage and Antonio Conte’s men should be too strong.

This huge tie is reminiscent of PSG’s clash with Real Madrid last term. The difference this time is that they’ve appointed Christophe Galtier, who is prepared to switch things up tactically and that should end PSG’s long-running underperformance in this competition. The French giants look like a much more serious prospect this term, so back them to see off a Bayern side who look vulnerable.

This isn’t a tie we’d have expected to see in the last 16, but Brugge made a stellar start to the competition and their brilliant form carried them through to the knockout round. This will be Scott Parker’s first taste of Champions League football as a manager, but he’s up against it when his side face the Portuguese leaders. Benfica were unbeaten in a group which contained PSG and Juventus, beating the Italian side home and away. The quarters beckon for them.

This looked like an even tie when the last 16 draw was made, but Chelsea’s rapid decline has been worrying. The Blues have been dreadful in recent weeks, while they’ve exited both cups at the first hurdle this term. Graham Potter lacks European experience, while the Blues’ struggling midfield should struggle to match Jude Bellingham.

Liverpool will be out for revenge after losing the Champions League final to Real last season, while they impressed through their group stage campaign. That’s made them favourites to take out Real, but the Spanish giants midfield should prove a nightmare for Jurgen Klopp’s side. The Reds have struggled in the middle of the park this term and Luka Modric – despite his age – should run the show against them.

Europa League holders Frankfurt know their way around a European tie, but they could be stretched too far in this clash with the Serie A leaders. Napoli have been fantastic in all competitions this term and after signalling their intent with a 4-1 victory over Liverpool in their European opener, they look good to book a place in the last eight.

Napoli are a cut above the rest of Italy, which could see two Portuguese sides in the last 16. Porto are in a good spot in this tie with the second leg at home, while they won their final four games in the group stage to book their place in the knockout round. Inter haven’t been convincing domestically and they only edged through to this round thanks to an underwhelming Barca side. Back them to fall short against Porto.

While the rest of the ties are competitive, it’s hard to see Man City exiting early. Leipzig saw off Celtic and Shakhtar Donetsk in the last round, but they are no match for the Citizens. Pep Guardiola’s side may have repeatedly fallen short, but they tend to get past the first hurdle in the knockout rounds. After reaching the final in 2021 and being seconds away from a repeat in 2022, their European experience should see them through.