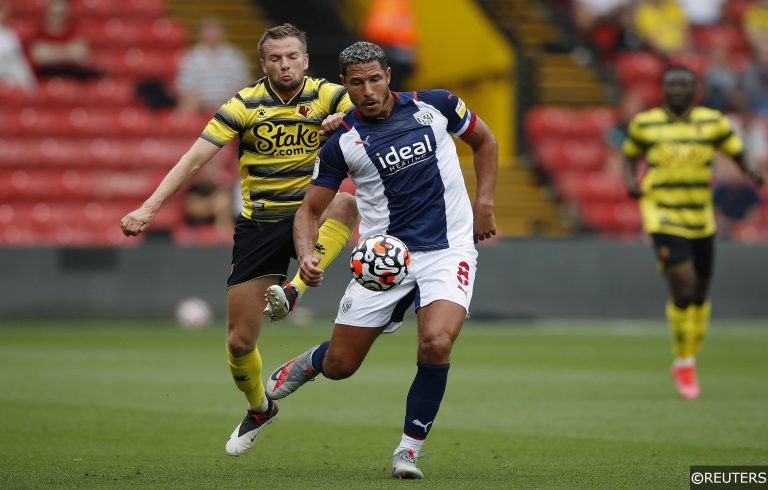 With the Premier League, Bundesliga and Ligue 1 all starting this weekend we are almost back to full-strength when it comes to domestic European football and that means the return of our popular multi-day accumulator series! Every Sunday we pick five matches – one on each day – and build a tasty accumulator to get you through to next weekend!

This week, I’m focusing on teams likely to perform well on their travels over the next five days, building out a tasty 34/1 Away-Day Heroes acca.

West Brom struggled against the back-three of Middlesbrough last weekend and that is an ongoing trend for the Baggies. They have failed to win their last six against back-three systems, losing three times, and have failed to score in four of them. Watford are likely to set up with a similar system and come into this fresh from a deserved win against Sheffield United in their opener. The newly-relegated Hornets have one of the most dangerous attacking lineups in the Championship and they could punish West Brom on Monday.

Benfica demolished Midtjylland 4-1 in the first leg of this tie and there is nothing to suggest a Danish comeback is on the cards on Tuesday. Benfica followed that with a 4-0 crushing of Arouca in their domestic opener and have scored at least two goals in 16 of their last 23 European games. Their opponents have conceded at least twice in three of their last five and have only won one of their last ten home European ties.

Two newly-promoted clubs go head-to-head in the Carabao Cup on Wednesday and I fancy the Championship side to progress. Rotherham may be favourites for the drop but they have begun their campaign with a point against Swansea and have the quality to see of Port Vale. The Valiants got off to a flyer in League One with a win over Fleetwood but were brought crashing back down to earth on Saturday as Exeter City thrashed them 4-0. They could struggle against a Rotherham side that have only lost two of their last 12 competitive away games.

Malmo made amends for their slow start in the first leg of this tie, putting three second-half goals past underdogs Dudelange to bring a commanding lead to Luxembourg this week. A comeback looks unlikely too, with the hosts losing their last home game 4-1 to Pyunik in Champions League qualification. Ominously, this came after a first-leg win away from home, and now they face a stronger Malmo side that have only lost five of their 14 competitive away games this calendar year.

Both Freiburg and Borussia Dortmund kicked their Bundesliga campaigns off with a win at the weekend but the visitors are justified favourites as they visit the Europe-Park Stadion. They have won five of their last eight meetings with Freiburg and the hosts’ last competitive home game was a 4-1 defeat to Union Berlin last season. Borussia Dortmund have won six of their last eight in all competitions and their only away defeat since January came against Bayern Munich.