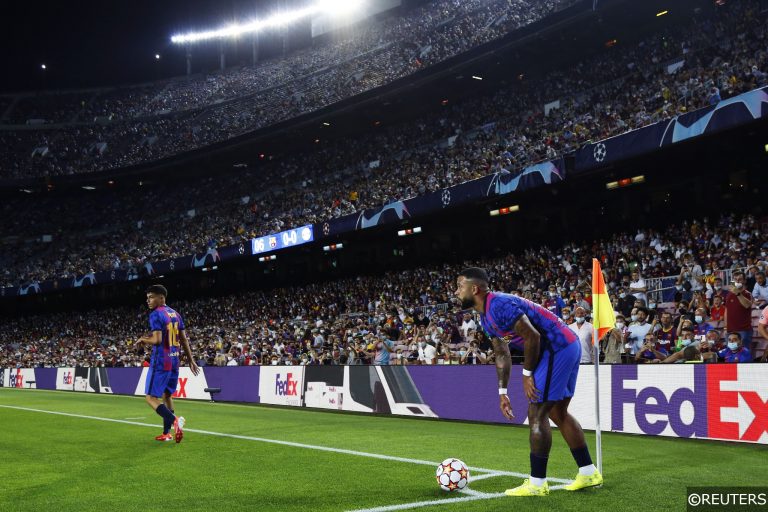 Our writers have covered the best of Sunday’s action in our free football predictions, with four tips standing out above the others. All of our match predictions are backed with a star rating and four selections for Sunday are three-star picks, which are reserved for the bets we are most confident in.

This week each of those four tips are both teams to score selections, so we’ve put together a BTTS fourfold for Sunday’s Star-Struck Accumulator, which you can back at 13/2 below.

Bordeaux have conceded in every game so far this season, conceding 20 times across their nine matches. Things have been going better for them going forward, as they’ve managed to score in six of their last eight league starts.

Things won’t get any easier for the hosts this weekend, given that Nantes have scored 10 times across their last four matches. However, with no clean sheets across their four away matches this term we’re not confident in either defence holding out.

Montpellier are always good for goals and they’ve conceded 16 times already this season. However, they’ve also managed to score 16 times at the other end – the same tally as opponents Lens have managed this term.

The visitors have kept only one clean sheet on the road this term and with Montpellier leaking so many goals back the pair’s high-scoring antics to continue.

There will be an excitement in the air at St James’ on Sunday as Newcastle fans look forward to a brighter future and we expect that to result in a thriller this weekend. It helps that neither side are looking particularly solid at the back.

Newcastle’s last five matches have seen both teams score, as have Tottenham’s last four. Newcastle have conceded in every game this term and Spurs only have one clean sheet to their name, so BTTS is our pick here.

Barcelona’s clashes with Valencia usually deliver on goals, with all but one of the last eight encounters between them seeing both teams find the net. During that run they’ve scored 30 goals between them, so this should be a high-scoring game.

Barcelona are obviously more vulnerable now given how their fortunes have turned. They have kept one clean sheet in four home games this season, but they’re scoring 2.5 goals per game at the other end. Valencia average 1.5 goals per away trip, so both teams to score looks good here.