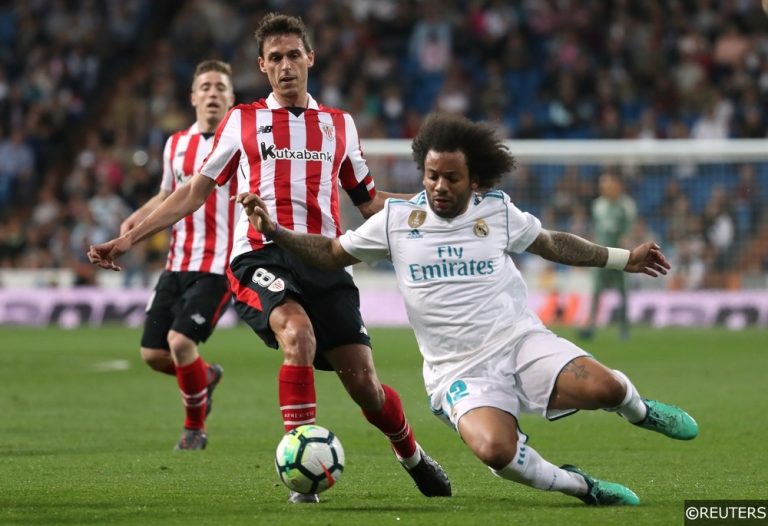 The return of the Champions League means all of La Liga’s top four from last season are in action this Saturday and it really is a mouth-watering day of action in the Spanish top flight. Barcelona and Real Madrid both face tough trips to the two big Basque clubs within a few hours of each other and there’s every chance we will see one of the two giants of Spanish football drop points for the first time this season.

The other matches on Saturday are also pretty significant ones. Valencia and Real Betis clash in the late afternoon kick-off at the Mestalla and they were involved in a 6-3 thriller last term so that could be worth tuning in for as Betis look to build on their Seville derby win. Meanwhile the very first game of the day is a big one for Atletico Madrid, who have been really poor so far this season in La Liga and desperately need to bag all the points against Eibar.

The Anoeta reopens for the visit of Barcelona

The Anoeta stadium really has undergone quite a transformation! pic.twitter.com/VnuIul8GBq

The Anoeta has always been one of Spanish football’s least loved stadiums. Opened originally in 1993 as a multi-purpose venue complete with a running track which left fans a long way back from the pitch, it was never really popular with Sociedad fans. There has long been talk of a renovation project to bring the stands closer to the pitch, as is very typical in the Basque Country, which is loosely viewed as the most British part of Spain. Finally over the past couple of years, those plans have taken off and although the renovation isn’t totally complete, Saturday’s game will be the first at what is being referred to as the ‘new Anoeta’ with the unpopular running track gone and the fans much closer to the action.

From a Barcelona perspective, it’ll be interesting to see whether the change proves to be a blessing or a curse. The old Anoeta was a real bogey ground for them with the Catalan giants failing to win a league game there between May 2007 and January of this year when they finally ended one of the strangest runs in football. Ernesto Valverde has already done what the likes of Pep Guardiola and Luis Enrique failed to do, by winning a league game in San Sebastian and he’ll be hoping for a repeat this weekend.

Sociedad have played their first three matches away from home so they’ll be really looking forward to getting out at their new-look stadium in front of their own fans again. It’s sure to be a cracking atmosphere but Barcelona should be able to field their strongest eleven and having hit eight past Huesca last time out, they shouldn’t be lacking in confidence in the final third.

The atmosphere is likely to be just as intense around 70 miles west as Athletic Bilbao host Real Madrid on Saturday evening. They are always in for a hostile welcome whenever they go to the Basque Country but things come to a head at San Mames and there is nothing the locals like more than getting one over on Los Blancos.

Athletic victories in the fixture haven’t exactly come regularly in recent years but there has been the odd upset for the Basque fans to celebrate. Since a 2-0 win at the Bernabeu in 2005, which was actually Athletic’s third straight win against Real Madrid, they’ve only beaten the current European champions twice. Both were 1-0 victories at San Mames in 2010 and most recently in 2015 and this is a good opportunity for Eduardo Berizzo to really strike a chord with the Bilbao public early on in his reign.

Their chances though don’t appear to be great. Although Athletic have never been relegated from La Liga, a fact they are very proud of, this isn’t really seen as one of their great teams. They’ll be hoping the fit again Aritz Aduriz can spur them on with the veteran striker still going despite him set to turn 38 this season. He scored the only goal the last time Athletic got the better of Real but it could be the pace of Inaki Williams or the craft of Iker Muniain that prove their biggest weapons here. However thwarting an in-form Real Madrid front three could be a really tough challenge for the home defence.

Before the season, it seemed highly probably that we would have a genuine three-horse title race this term after Barca’s relative stroll to the league crown last term. Atletico Madrid’s impressive UEFA Super Cup win over their city rivals only seemed to confirm that Diego Simeone’s men would mean business this term with on paper a much stronger squad than they commenced last season with. However just three games in and already there is talk of Atletico Madrid’s clash with Eibar on Saturday being a ‘must win’ fixture.

A poor defeat in Vigo last time out means they are already 5 points off the pace and failure to win this could see them fall 7 or 8 points back on Real Madrid and Barcelona already. That sort of margin can take months to make up at the top end of La Liga and while they wouldn’t be out of the title race, they’d already have a huge mountain to climb. We saw last term with Real Madrid how poor form early on can effectively kill off any hint of a title challenge and the way Atleti have been playing, they risk ending up in a similar position.

Eibar got off to a bit of a sluggish start themselves but they were winners over Real Sociedad last time out to kick their season into life and with a few players back from injury, they could be awkward opponents. All eyes though will be on Diego Simeone and it’ll be interesting to see what team he picks. New signings Rodri and Thomas Lemar were left out at Celta but his plan to revert to what was essentially last season’s team backfired so the Atleti boss may consider putting his faith in the two major summer arrivals again here in what already feels like a genuinely big game for the red and white half of Madrid.