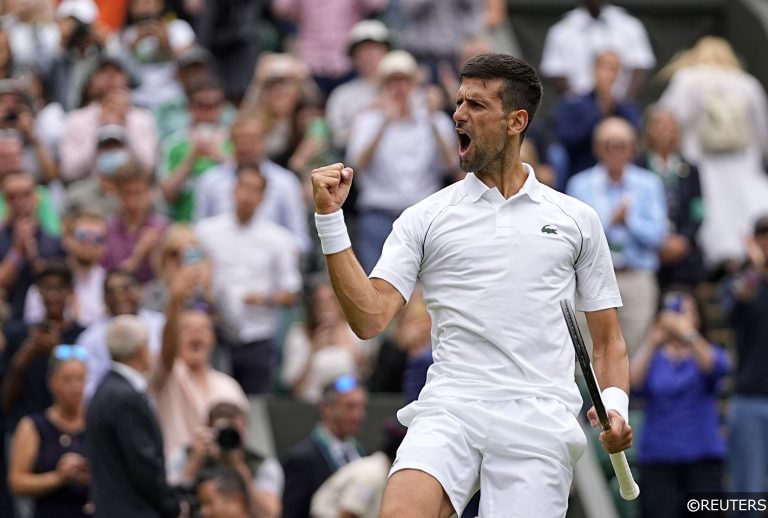 There are no prizes for guessing Novak Djokovic would be involved in this year’s Wimbledon men’s final but for tennis’ Jekyll and Hyde character, Nick Kyrgios, this is new territory.

While six-time Wimbledon champion Djokovic is bidding to take his Grand Slam tally to 21 and be crowned champion at the All England Club for a fourth time on the spin, Kyrgios is making his Grand Slam final debut.

In fact, the eccentric Australian had failed to reach a quarter-final of a Grand Slam since at the Australian Open in 2015 before his efforts at Wimbledon and profited from his scheduled semi-final opponent Rafael Nadal withdrawing through injury.

With Djokovic understandably a short-priced favourite, we looked through the #OddsOnThat markets available on Betfair and Paddy Power and pinpointed three that could be worthy of interest.

Djokovic has dropped sets in four of his six matches at Wimbledon this year and with the possibility of five sets, this #OddsOnThat market could go close.

Kyrgios’ serve is a big weapon and he served 30 aces in his opening game with Paul Jubb, 35 aces in his five-set win over Brandon Nakashima in round four and 24 in a straight-set win over Djokovic’s compatriot Filip Krajinovic.

Of course, Djokovic is one of the best returners in the game but that didn’t stop Tim Van Rijthoven serving 20 aces against the Serb in round four. The Australian’s serve is more devastating than the Dutchmans.

Djokovic isn’t renowned for serving lots of aces but if this goes five sets the former world number one would be expected to hit ten – he made 13 against Cameron Norrie in the last round.

Four of Kygrios’ five matches at this year’s Wimbledon have featured a tiebreak and so has both of his previous meetings with Djokovic. It is easy to envisage a couple in this match-up, especially if it goes the distance.

Norrie and Sinner have both taken the opening set against Djokovic in the previous two rounds and Kyrgios, who is so strong on serve, could land the first blow in this final.

The Australian is a difficult man to break, particularly early doors, and interestingly has won both previous meetings with Djokovic in straight sets, albeit those clashes did take place in 2017.

Even so, of the four sets they have contested, Kyrgios has won two of them 7-6 and another one 7-5, suggesting fine margins may separate the pair in the opening exchanges.

With only one break of serve likely to split the duo early on, backing Kyrgios to win the opening set 7-6 or 7-5 makes plenty of appeal.

A fast start is imperative from Kyrgios and punters should expect the big-serving Australian to get underway with four relatively comfortable holds of serve.

Kyrgios’ chances are boosted by him being able to win plenty of cheap points on serve and this is a market that appeals as the Australian bids to get an early foothold in the match.