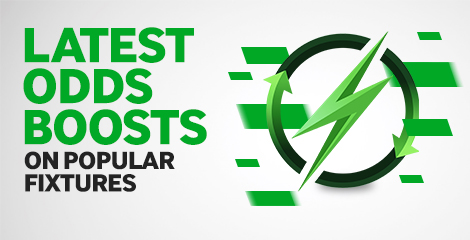 There are some huge games in the Premier League this weekend and the standout clash on Saturday sees out of form pair Liverpool and Chelsea clash at Anfield.

Betway have a host of Football Boost offers for Saturday’s games, with one from each of the six selections.

Mohamed Salah, Kai Havertz and Mason Mount to have 1+ shots on target each at 9/2

Liverpool and Chelsea are both languishing in mid-table with just 28 points each – 10 adrift of Newcastle in fourth spot. Both of these heavyweights are entering only wins will do territory if they are to qualify for next season’s Champions League so both need to go for it on Saturday, which could well lead to plenty of attempts on target.

Brennan Johnson to score & Nottingham Forest to win at 5/1

At the other end of the table, a victory for either Bournemouth or Nottingham Forest in this meeting would be huge in terms of their respective survival chances. Brennan Johnson scored both goals in Forest’s 2-0 win over Leicester last time out – can he fire them to another victory on the south coast?

Brighton, Aston Villa and Watford all to win at 15/2

Brighton are one of the Premier League’s form teams and they face a trip to struggling Leicester, while Villa are up against relegation-threatened Southampton. In the Championship, third-placed Watford have a home assignment against a Rotherham side who are hovering just above the drop zone.

Southampton’s James Ward-Prowse averages 1.2 shots-per-game and exactly half of those come from set pieces, can he make one count when Villa visit?

Brighton’s Kaoru Mitoma has managed 12 shots in total over his last five games. Can he test the keeper twice at the King Power?

West Ham and Everton both find themselves in real trouble ahead of Saturday’s Premier League meeting. Both managers may well need a win to keep their jobs, and with both defences struggling there may well be goals at both ends.

Callum Wilson, Miguel Almiron & Wilfried Zaha 1+ shots on target each at 9/2 or Newcastle to win & both teams to score at 4/1

There are two offers for the late game as Crystal Palace will bid to derail another title challengers’ bid, as they entertain Newcastle after claiming a point against Manchester United – ending the Old Trafford side’s nine-game winning run in midweek.

Not got a Betway account? Sign up below to get a £30 matched free bet if your first football acca loses!