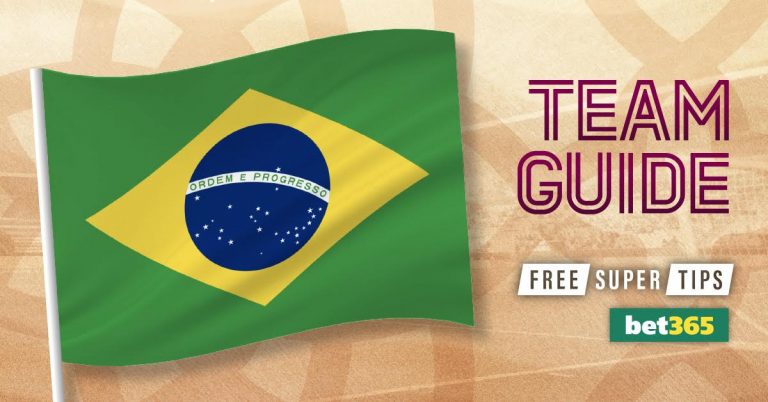 South American heavyweights Brazil are always among the favourites going into a World Cup and they will undoubtedly be one of the teams to watch in Qatar.

The Selecao have competed in every edition of the World Cup since the tournament’s inception in 1930, featuring 22 times and winning a record five titles, as well as finishing as runners-up twice.

Brazil last won the World Cup in 2002 but that was their last appearance in the final.  The four renewals since have each produced European winners, but with the likes of Neymar, Vinicius Junior, Marquinhos and Alisson in their squad they will feel they have a real chance to end their drought.

Brazil: The story so far

Brazil breezed through qualifying with a near-perfect record as they won 14 of their 17 games, drawing the other three.  Tite’s men conceded just five goals during the qualification campaign and scored a whopping 45 themselves.

Brazil lost the 2021 Copa America final to Argentina but have embarked on a 13-match unbeaten run since, winning 11 of those games.

They did fail to beat fellow big-guns La Albiceleste during qualifying, however, as the two sides played out a 0-0 draw in San Juan in November last year.  The tie between the two sides in Brazil was suspended in bizarre circumstances after officials, said to be Brazilian medical chiefs, stormed onto the field minutes into the game.

Four members of the Argentina squad were accused by the Brazilian government of providing false information on immigration forms and breaking COVID-19 laws.

That game will be played in September but has no bearing on the group, as Brazil have already been confirmed as CONMEBOL winners and the World Cup group draw has already been completed.  Instead, that match is essentially a high-quality warm-up clash for the two nations, depending on what teams the respective managers select.

Brazil are the 9/2 favourites to win the 2022 World Cup in Qatar but they have been drawn in what looks to be a competitive Group G.

Neymar and co will come up against European duo Switzerland and Serbia in the group stages, as well as African hopefuls Cameroon.  The South Americans are 4/9 to win the group and will expect to qualify, but there are still no easy games in that particular group.

Brazil open their World Cup account against Serbia on November 24, then face Switzerland before completing the opening round with a game against Cameroon.  If they manage to progress, they will come up against either Portugal, Ghana, South Korea or Uruguay in the last 16.

Football is close to religion in Brazil and after losing out on the title in 1950 to Uruguay, when a draw at the Maracana would have been enough for them to win a maiden World Cup, in a game known as “the Maracanazo” a period of national mourning followed.

A period of renewal followed, and by the time Brazil competed in the 1954 edition of the tournament they had changed their kit to an early version of the famous yellow and blue colours that are now synonymous with the Brazilian national side from white. They reached the quarter-finals that year, losing out to pre-tournament favourites and eventual runners-up Hungary.

Brazil claimed their first title in won three of the four World Cups between 1958 and 1970, thanks to star players such as Garrincha, Zito and Pele. Brazil reached the semi-finals in 1974 and 1978 but they had to wait until 1994 for their next success as Dunga, Romario, Cafu and Bebeto helped them lift the trophy in the USA, with a 17-year-old Ronaldo also a member of that squad.

They lost out to host nation France in 1998 but went on to claim a fifth title in 2002 in South Korea with a squad that included Ronaldo, Rivaldo and Ronaldinho.

Since then, Brazil have reached three quarter-finals and reached the last four as the host nation in 2014, but they were thrashed 7-1 by eventual winners Germany at the Estadio do Mineirao as they slipped to a first competitive home loss since 1975 and their biggest ever defeat in a World Cup in a match now known as the “Mineirazo” – a reference to the loss to Uruguay in 1950.

Tite has been the Brazil manager since 2016 and guided them to Copa America glory in 2019 and the final two years later, where they went down 1-0 to Argentina.

The 61-year-old was a midfielder on his playing days and spent the entirety of his career in Brazil, before making the move into coaching in 1990.

Tite has managed a number of Brazil’s top sides, such as Atletico Mineiro, Palmeiras and Gremio, but his most successful stint came with Corinthians – leading them to two Serie A titles, the Copa Libertadores in 2012 and the FIFA Club World Cup later that year.

Many expected Tite to either be sacked or resign after Brazil fell at the quarter-finals but the CBF kept faith with the coach, regarded as the best Brazilian coach of his generation.  Tite has a tactical and organised approach to the game and a philosophy that demands every player contribute – which is perhaps why Brazil have stuck with him to guide their current crop of players. 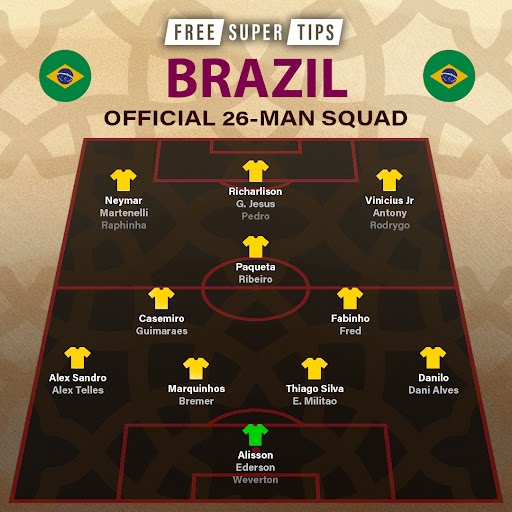 In years gone by, Brazil’s teams were characterised by a few star players who would generally lead the team.  Under Tite that isn’t necessarily the case and this is perhaps the most organised and disciplined incarnation of Brazil but that doesn’t mean they don’t have some superstars.

Paris Saint-Germain forward Neymar is the big name in the squad and Real Madrid’s Vinicius Junior will also probably play a big role in Qatar. Given the wealth of talent available, picking out a rising star is a tough ask; West Ham’s Lucas Paqueta deserves a mention but as the 24-year-old already has 33 caps the phrase ‘rising star’ might be pushing it a bit, Newcastle’s Bruno Guimarães clearly has a big career in front of him but Palmeiras midfielder Danilo is one to watch as well.  There are no guarantees the 21-year-old will make the squad and he is uncapped, but he was included in the squad for two friendlies in June and is already a two-time Copa Libertadores winner with his club side – playing a key role in both of those successes.

Brazil to win the World Cup at 9/2

Brazil are rated as the favourites to win the tournament in Qatar and there is no reason why they cannot go far. The European nations could struggle in the heat in the Middle East and in that regard, the Selecao may fare a little better, while South American nations tend to dominate when the tournament is held outside of Europe.

With the players Brazil have at their disposal, they look worthy favourites and there is no reason why they can’t go all the way in 2022.