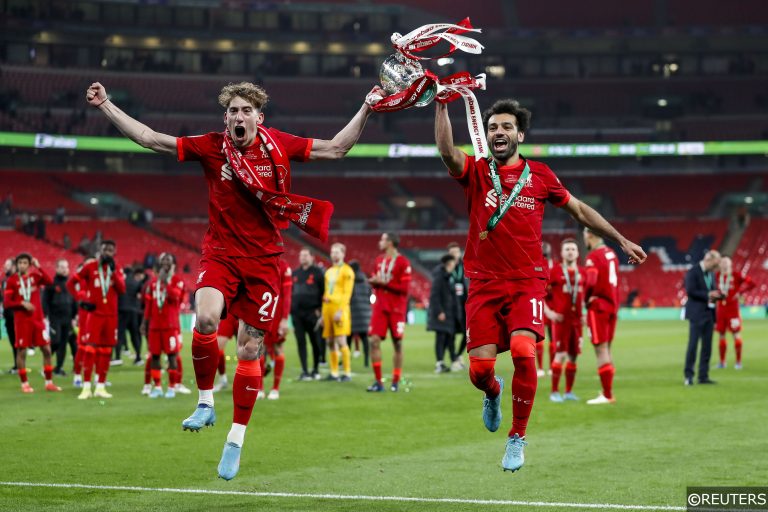 Sunday saw the first piece of silverware of the season handed out, as Liverpool won the EFL Cup against Chelsea at Wembley. The Reds won 11-10 on penalties after a thrilling game, landing a first domestic trophy for Jurgen Klopp in England.

No Liverpool boss has ever won all four major trophies during their reign, while no team has won all four in the same season. Klopp could be a trail blazer on both counts, with his side one step closer to an unprecedented trophy haul.

After a busy weekend domestically and abroad, we’re taking a look at how they’ve impacted the betting markets for football’s biggest prizes. See our look at Liverpool’s quadruple hopes below, while we also run the rule over the title races in Europe’s top leagues.

Liverpool didn’t play in the Premier League at the weekend, which allowed Man City to strengthen their grip on first place. However, their late winner in a victory at Everton failed to press their case.

Despite that, Liverpool’s odds for the title have drifted slightly, the Reds now find themselves 11/4 having been priced at 5/2 before the weekend. However, they were 6/1 before Tottenham’s shock win at the Etihad, so the title race is clearly still on.

While Liverpool have work to do in the league, their EFL Cup win was the first step in a potential quadruple. The Reds were 1500/1 to win all four trophies at the start of the season, but now they are 66/1 to add the Premier League, FA Cup and Champions League to their haul for this season.

As in the Premier League, Liverpool are second-favourites behind Man City in both the Champions League and FA Cup. The Reds are 7/2 for European glory, while they’re the same price to win a second domestic trophy of the campaign.

They’re arguably more suited to European football than Man City, who have tended to struggle in the Champions League. Having just pipped Chelsea to domestic silverware, it’s tough to rule them out in the FA Cup too. After bolstering their forward line the Reds have a squad to compete on multiple fronts, so expect them to keep their quadruple hopes alive until late in the season.

It’s business as usual in Spain, Germany and France where the league leaders are all on course for glory. A treble backing Real Madrid, Bayern Munich and PSG to see out their lead and win their respective divisions is priced as short as 0.08/1.

However, Serie A is a different story. Inter Milan drew 0-0 with Genoa on Friday, which saw their outright odds move from 1/2 to 8/11. AC Milan also drifted after drawing, while Napoli won 2-1 at Lazio to bolster their title hopes. The Partenopei have been cut from 9/2 to 11/4 for the Scudetto after going top on Sunday night.

With Victor Osimhen back from injury and only two away trips left against sides in the top 10, look to Napoli before their odds are cut even shorter.