Can Arsenal sustain a title challenge despite their growing injury list? 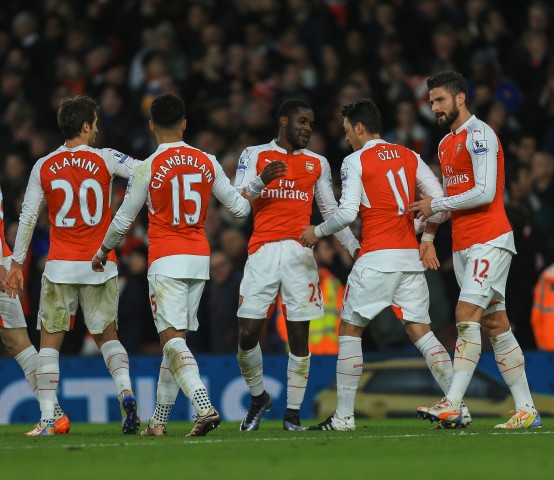 The pattern of Arsenal’s recent Premier League seasons has been monotonous: an eternal return of the near miss, the spurned opportunity, and the injury-induced slump. As muscular injuries pile up and Arsene Wenger’s lopsided recruitment policy once again makes headlines, Arsenal fans can be forgiven for being a bit cynical. However, they have won all three matches since the Francis Coquelin and Santi Cazorla partnership was broken up, leading many to wonder if Wenger’s squad is capable of defying the trend and sustaining a title challenge for the entirety of a season. Arsenal are 13/8 to win the title with bet365, but are they worth betting on?

How they have fared so far:

The stats can be misleading. Arsenal’s back-to-back league victories have come against two of the division’s most fragile teams – Aston Villa and Sunderland. In both instances, the potential vulnerabilities in Arsenal’s makeshift eleven have not been tested, thanks largely to the deep-lying defensive models utilised by both (Villa held 45% possession and Sunderland 32%). Instead, Arsenal were given the freedom to attack relentlessly without a significant threat on the counter, allowing for Joel Campbell to abandon defensive responsibilities on the right and Matheiu Flamini to remain untested.

The match against Man City this weekend will be the first test of their steel without Coquelin, Cazorla, and Alexis Sanchez, but the Champions League game against Olympiakos gave some indication of the problems Arsenal will face.

Firstly, the comfortable victory – hailed by much of the English media as a superb Arsenal performance – was in truth more the result of the Greek outfit’s dreadful display. Olympiakos’s formation was baffling; they utilised a gung-ho 4-2-3-1 system, with both wingers and the central attacking midfielder pushing so high up the pitch as to virtually make it a 4-2-4. They left enormous gaps in central midfield that both Mesut Ozil and Campbell flourished in without breaking a sweat.

The only time Arsenal’s depleted side were tested was on the counter-attack – when Aaron Ramsey’s attack-minded positioning was exposed. Many have hailed his return to the middle, but the “box-to-box” tag attached to Ramsey is perhaps too kind. His charges into the penalty area can often leave his midfield partner exposed, as it did on numerous occasions in Greece. Ramsey missed four of his five tackles, and was frequently absent from defensive spaces. We did correctly predict that Arsenal would get the win in our Champions League tips.

Three wins from three looks good, but Arsenal’s long-term potential is yet to be scrutinized.

There have been a few unexpected positives to emerge from the latest injury crisis that suggest Arsenal can maintain their form over Christmas. Joel Campbell seems to have embraced his chance in the first team, having scored or assisted a goal in three of his last four starts. Campbell offers a directness and striker-instinct that Wenger has craved for years, and necessity has overridden the manager’s stubbornness on that front; Campbell’s drifting runs in behind the defence were crucial in unlocking the narrow, congested defensive wall erected by Sam Allardyce a fortnight ago.

For all Ramsey’s faults, there is no doubt that he adds a certain penetrative energy to Arsenal’s midfield. He is certainly a very good back-up for Santi Cazorla in this role, and a player that could swing tight matches in their favour. Cazorla has averaged 82 passes and 2.6 key passes per game this season, whilst Ramsey has averaged 91 passes and 2.0 key passes in the last three appearances. Not that their roles are similar; Cazorla is a more delicate distributor from the base of midfield, whereas Ramsey has provided Arsenal with an additional passing option within the penalty area.

These two changes are likely to serve Arsenal well in upcoming games against Newcastle and Sunderland, but their Christmas fixture list heavily features possession-centric sides that will look to exploit the above mentioned flaws in Ramsey’s game; they play Southampton, Liverpool, Bournemouth, Chelsea, Stoke, and Man City before February.

Arsenal’s primary weakness will be counter-attacks down both flanks, since neither Alex Oxlade-Chamberlain nor Joel Campbell are particularly keen on defensive duties. Over Christmas, Sadio Mane and Junior Stanislas will test their ability to track back.

This situation will be exacerbated unless Mathieu Flamini can maintain consistency. Flamini is a remarkably inconsistent player, switching between an excellent destroyer (five interceptions versus Olympiakos) and a flimsy one (zero interceptions versus Tottenham). This run of fixtures is quite possibly Flamini’s last chance to prove his worth in North London.

Of course, one way to solve Arsenal’s weaknesses is to reinforce central midfield in the January window, and Wenger has admitted he is “open-minded” to the possibility of strengthening the squad. Adrien Rabiot (3.3 tackles, 1.8 interceptions per match) is a long-time target for Arsenal, and he would be an ideal candidate to sure up midfield. The same can be said for William Carvalho or Granit Xhaka, the Borussia Monchengladbach midfielder catching the attention of a number of high profile clubs this season.

Always bargain hunting, Wenger has only signed two players in January since 2006 – Nacho Monreal in 2012/13 and Andre Arshavin in 2008/09. Do not expect more than one new signing, but a single defensive midfielder could be all they need to hold on at the top until their star players return. If they do, then back Arsenal to win a trophy at 1/1 with SkyBet.

Man City are difficult to predict, but if Yaya Toure repeats his performance against Swansea last weekend Arsenal and Ramsey have plenty to fear. Toure’s dribbling through the centre of the pitch was reminiscent of his storming performances under Roberto Mancini, and could overwhelm Mathieu Flamini if his central midfield partner is too high up the pitch.

This match in particular will offer us firmer evidence of whether Flamini, Ramsey, Chamberlain, and Campbell are capable of playing every week for a title chasing side. Sunderland, Villa, and Olympiakos barely tested their strength in depth; Man City certainly will. Want to know who we’re backing? Check out our Arsenal vs Manchester City betting tips.