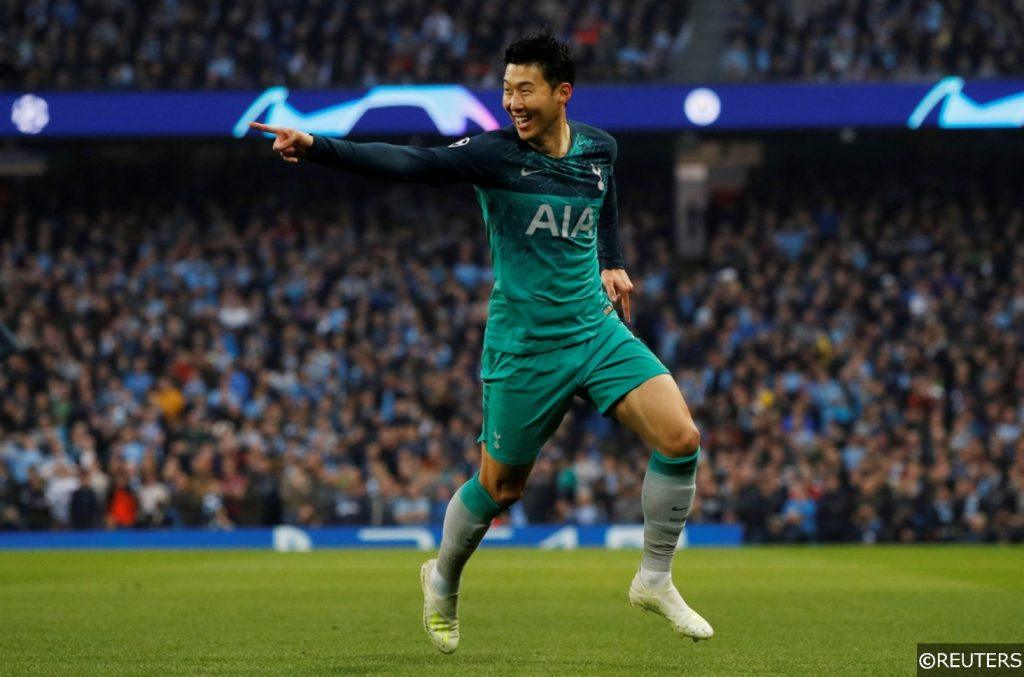 Poacher, goal-getter, hitman, fox in the box or marksman – the alias may vary from team to team and player to player, though the job invariably remains the same.

Every team competing in the latest round of Champions League Group fixtures this week have players capable of turning games in their favour in an instant.

Those same match-definers routinely rank near the top of the list in the bookmakers’ always popular Anytime Goalscorer markets, and we’ve compiled a list of players that we think have an excellent chance of getting their names in lights this week.

Don’t forget – You can also find all of our match previews and betting tips for the midweek action on our Champions League predictions page.

After a dismal run of results, Tottenham are in desperate need of a pick me up, and last year’s beaten Champions League finalists have an opportunity to cut loose this week against a weak looking Red Star Belgrade outfit.

South Korean attacker Son Heung-min was one of Spurs’ star performers during their lengthy UCL run last term, netting four times in 11 starts to help his club reach the final in Madrid.

The 27-year old registered for Tottenham in their 7-2 mauling at the hands of Bayern Munich last time out, and Son was one of the few Spurs players to come out of that harrowing night with any credit.

Son remains Tottenham’s top scorer at their new home in North London in all competitions, and we think the pacey forward can make his mark there again this week.

French prodigy Kylian Mbappe has struggled with injuries this term, though the rapid striker is fit and ready to help PSG’s charge for Champions League points in Belgium this week.

Club Brugge have started their campaign in promising fashion, taking two points from two games against Galatasaray and Real Madrid, though they face a PSG outfit in far better form than either of the aforementioned clubs.

Mbappe marked his return to the fold with a goal off the bench for PSG against Nice at the weekend, and we’re tipping the 20-year old to follow that strike up with another in Belgium this week.

“The Scourge of Spurs” Serge Gnabry has been in fine goalscoring form for Bayern Munich this season, hitting six goals for the Bavarians in five Champions and Bundesliga starts.

Former Arsenal youngster Gnabry famously rattled four goals past Tottenham on October 1st, and it’s worth noting that the 24-year old bagged his two German top flight goals in away games for Bayern too.

A naturally quick player, Gnabry seems to thrive in the greater spaces afforded to Bayern’s attackers in the team’s away matches, and we think the attacker can punish an Olympiakos defence that conceded five goals in their first two Group B fixtures.

Our analysts’ have tipped the Bavarians to run out comfortable winners in their Olympiakos vs Bayern Munich predictions. Read their match preview for more betting tips.

A 3-fold acca featuring our Tuesday UCL anytime goalscorer selections is available at 9/1 with bet365.

The talented 23-year old scored in each of his first two Group game appearances against Genk and Liverpool, and Hee-Chan registered four times in his last six starts for Salzburg overall.

The attacker will expect to be heavily involved in all of RB’s manoeuvres in the final third again against Napoli this week, and we think he is a prime candidate to score again in what promises to be a thrilling encounter in Austria.

Read all of our experts’ betting tips for Wednesday’s game in our RB Salzburg vs Napoli match preview.

Summer signing Quincy Promes has been key to their early success on the continent, and the 27-year old found the net in each of Ajax’s opening group triumphs against Lille and Valencia respectively.

This week, Promes will pit his wits against a Chelsea team that have looked for from water-tight in defence under Frank Lampard, and we’re backing the former Sevilla and Spartak Moscow star to add to his tally for the season against the Blues in Amsterdam.

The Dutch champions have been tipped to win in our analyst’s Ajax vs Chelsea predictions this week. Make sure to check out their match preview for more Champions League betting tips.

Highly coveted striker Timo Werner hit the ground running in the Champions League this season with a fine brace in Portugal against Benfica on match day one.

Werner, like the rest of his RB Leipzig teammates, was left frustrated on matchday two however, when Lyon left Germany with a 2-0 win and three Group G points.

The 23-year old who scored at the weekend against Wolfsburg, will be doing his utmost to get Die Roten Bullen back on the right track against a Zenit this week, and we think the lightening quick centre-forward has enough in his armoury to cause the Russians major problems.

A 3-fold acca featuring our Wednesday UCL anytime goalscorer selections is available at 11/1 with bet365.