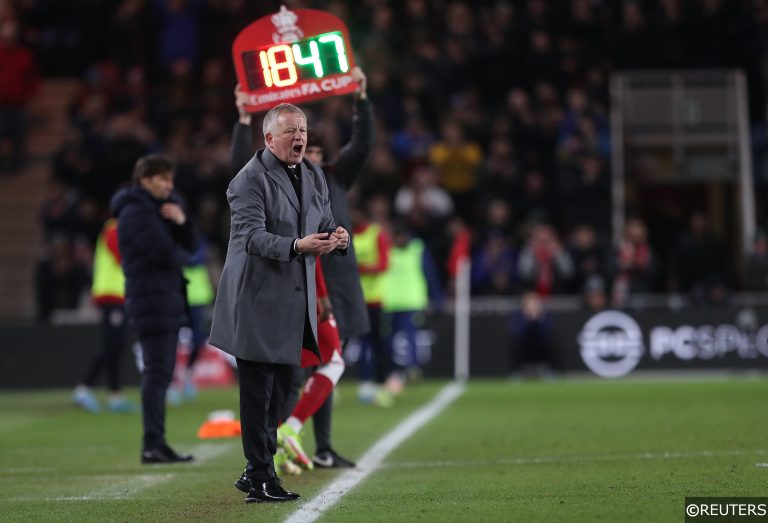 In the last two seasons, three relegated Premier League clubs have immediately won promotion back to the top-flight. When you consider that just seven of the previous 30 promotion spots were claimed by newly-relegated sides, it’s clear the landscape of the Championship is changing.

Last season saw Fulham show their class in the second tier, while Sheffield United made a strong playoff push and West Brom had flashes of promotion quality in an up and down year.

Of course, the 2021/22 Championship campaign wasn’t diminished by the strength of those coming down. We still got an incredible season with some thrilling playoff action, with Nottingham Forest showing how you can compete with the riches of parachute payments.

After a good run of backing title winners, I’m back to take a look at the Championship’s promotion race, covering the best bets for the title, promotion and a top six place. 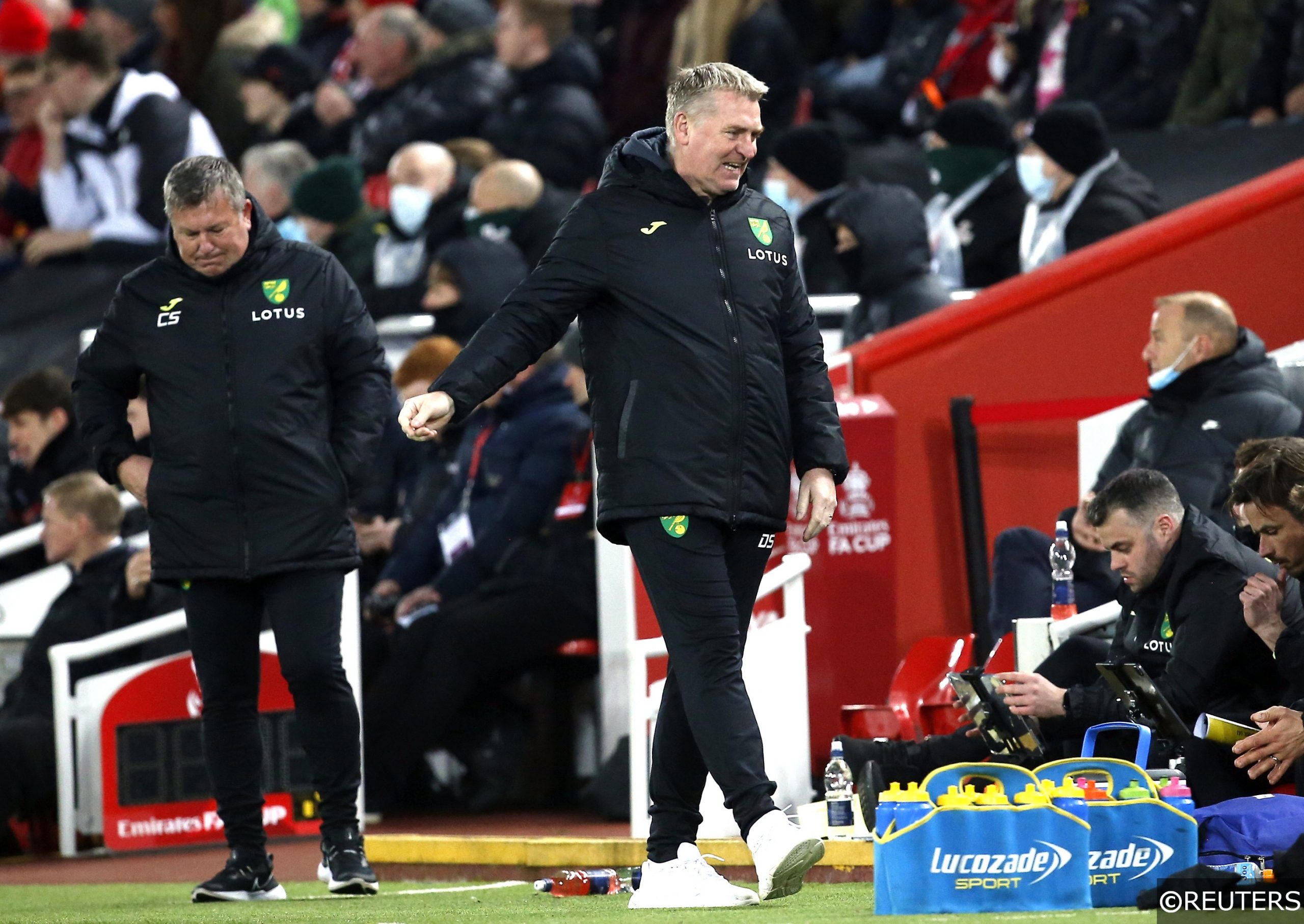 I’ll admit this is hardly an inspired selection. Although last season I backed the favourites and that panned out quite well in the end. It’s starting to feel like the Championship is a league dominated by Norwich and Fulham, with the pair doomed to never meet on the pitch.

When Norwich moved for Dean Smith to replace Daniel Farke it was clear his EFL experience was a bonus. The Canaries aren’t about to break the bank in a desperate attempt to survive, they’re trying to build towards being a stable top-flight outfit over time.

Smith did a lot of the legwork which turned Brentford into promotion candidates, before jumping ship to Villa and inspiring them to playoff success. He’s had some time in charge to settle and a full pre-season to work with this side, so he should be aiming higher than another playoff tilt.

Their ambitions have to be automatic promotion, given they’ve assembled a squad which is incredibly strong in the second-tier. The Canaries may not quite cut it at the highest level, but they proved in 20/21 that they’re too strong for the Championship.

Most of that squad remains, with a few additions added ahead of last season’s Premier League campaign. The Canaries have last season’s TV riches and their parachute payment to fund extra signings ahead of the new season too, despite limited moves.

However, they’ve splashed £10million on Brazilian forward Gabriel Sara, while Issac Hayden on loan is a really solid bit of business. In the last two seasons they’ve had youngsters Oliver Skipp and Billy Gilmour in that position, so getting Hayden’s experience should help at this level.

Given how Norwich stormed to the title last time out and considering how Fulham followed suit last season, the Canaries look good for top spot this term. They have the depth, promotion experience and room for further additions. Having won the title in their last two seasons at this level, Norwich are worthy favourites.

I may have went safe with Norwich, but here’s an outlandish take – Watford are actually quite a stable club. While the Hornets have brought new meaning to the term manager of the month, they’ve assembled a good squad which could cope with a few departures.

Two Premier League relegations in three years isn’t a great record, but the Hornets went into their successful 20/21 promotion campaign with a young squad full of potential. They finished second behind Norwich that season and I wouldn’t be surprised if they did so again.

They’ve kept players who have experience of their last promotion campaign, while there are a few South American talents who could have a breakout year in the second tier.

However, the most interesting thing about Watford is their manager.

While the Hornets have been through their fair share of bosses, they all tend to look like short-term appointments. Plucking Rob Edwards from League Two winners Forest Green bucks that trend. It seems like an ambitious move, despite the dodgy circumstances around it.

Edwards got Forest Green free-scoring on their way to fourth-tier success last season and he looks like he could outlive the typical shelf-life of Watford bosses. There are concerns about the step-up he’s making, but this is better than seeing the same tired names bounce around.

I’m optimistic about the move given the talent at his disposal. Of course, if it doesn’t work the Hornets will pivot elsewhere in time to salvage their season. This is a promotion-worthy squad, so expect Watford to find the manager to deliver it.

You can also back our outright winner selection and our top promotion pick in a tasty 22/1 double below:

Sheffield United were promotion candidates last season, but I imagine they tore the place apart looking for the Chris Wilder playbook. Unfortunately for them he’s taken that with him to Middlesbrough, where he’s building another promotion candidate.

They took a big step forward under Wilder, going from 14th when he arrived to finishing the season in seventh. They averaged 1.65 points per game during his reign, which averaged out over the full season would have put them fifth – ahead of the Blades.

Their run in the FA Cup last term boosted the fanbase and the squad, while they’ve made solid moves in the window so far. With the rumoured £15million deal for Djed Spence set to go through, Wilder essentially has free money for a player he didn’t use to now bolster the squad further.

Wilder was able to turn last season’s outfit into playoff contenders, so this season they should be a side to fear. He has a track record of promotions and he was brought to Boro to add to that. He already seems to have a squad capable of it, but they’re only likely to get stronger between now and the close of the transfer window.

Coventry to finish in the top 6

Last season Coventry put up a playoff fight, but they were let down by their defensive issues. They were scoring in line with the sides around them after bagging 60 goals, but they conceded 59.

The Sky Blues have kept their main men from last season, keeping their creativity in midfield and top scorer Viktor Gyokeres. The Swede is just 24 and he could kick on again next season, while defensive additions should boost their top six hopes.

Callum Doyle has joined on loan from Man City and he should add some quality, while they’re taking a flier on some young defenders in Jonathan Panzo and Dermi Lusala. However, we can also expect some internal development given how they’ve improved in league position year-on-year across the last four seasons.

The Sky Blues were also xG darlings last season, finishing with the sixth-best record by the metric. With a young squad and a good recruitment record behind them, Coventry look good for a top six push.

Swansea to finish in the top 6

Joel Piroe is coming off a strong season for the Swans, while Michael Obafemi is a young striker capable of impressing at this level. The Swans did lose Flynn Downes to West Ham, but they’ve brought back Joe Allen who looks well suited to Russell Martin’s style of play.

Martin has also brought in Harry Darling from his old club MK Dons, while two more defenders have already arrived to bolster a backline which struggled last term.

If their forwards continue to improve and Russell gets a handle on the defence, then the Swans should flourish. He’s had a full preseason to work with the squad, which should help things. Getting a player of Allen’s experience is also a boost, so I’m backing the Swans to finish in the top six.