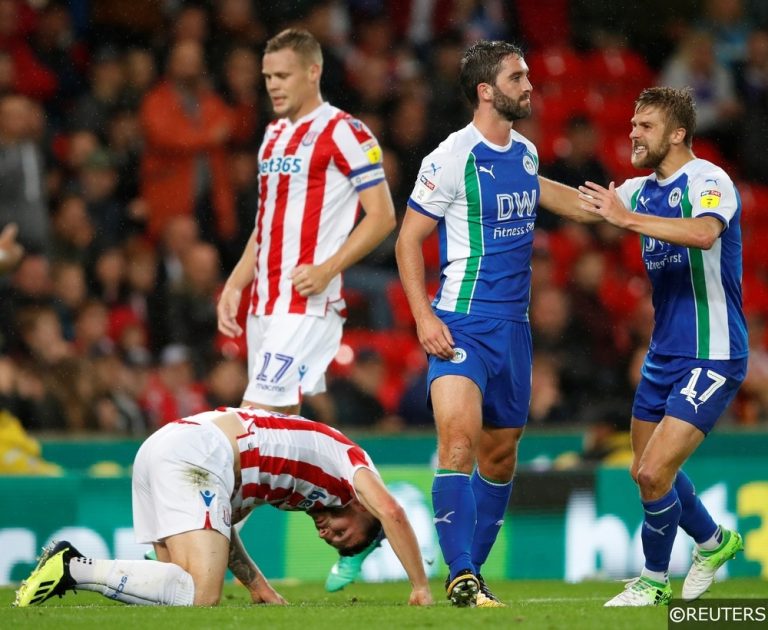 The midweek round of Championship matches certainly haven’t made things any easier for Stoke. The Potters suffered a 3-0 defeat to Wigan as their poor form continued, leaving their promotion hopes in tatters. After a midweek round of 10 matches, there’s plenty to go through from the second tier, including Gary Rowett and his future at the bet365 Stadium. We’re running through all the biggest talking points in our latest Championship review.

Potters off the Pace


While their early results were poor, things got a lot worse for Stoke following that 3-0 loss to newly promoted Wigan. The Latics were 2-0 up before half time at the bet365, with Will Grigg hitting two goals to hand the Potters a second defeat of the campaign. Things looked so positive for them a few weeks ago, but four games without a win is far from the ideal way to start their promotion push.

Stoke had started the season as the favourites to go straight back up, and their transfer business did back that up. However, they do seem to be lacking in creativity, as Rowett is working with a really functional squad at the moment. Brentford’s Ryan Woods has been linked, but will one or two signings really dig them out of this hole?

Stoke seem to be on a downward spiral since the start of last season. That’s something which starts with mismanagement, but the root of the problem is now going to be in the players’ mentality. It means that Rowett has a much bigger job than it seemed. He completed a turnaround, and admitted that promotion had to be the goal for his side. With 10 points dropped before the end of August, they have a lot of work to do to recover.

Hull are the visitors this weekend, and that’s a must-win clash for Stoke and Rowett. The run they have around the corner looks tricky, with West Brom and Swansea to come. They have a home clash with another promoted side – Blackburn Rovers – and on Wednesday’s evidence that’s another tough game for the Potters. Slip up on Saturday, and this run could drift in to October.


It’s not been all doom and gloom for the relegated sides, as Swansea managed to extend their unbeaten run on Tuesday. The Swans drew 2-2 with Leeds, becoming the first side to avoid defeat against Marcelo Bielsa’s side. Ollie McBurnie twice gave the Welsh side the lead, as Graham Potter picked up another impressive result.

While there have been issues behind the scenes at the Swans, it’s hard to argue with the job Potter is doing. Eight points from four games with a paper-thin squad is a great return. With the right backing, the Welsh side could go far under him. Right now, their boardroom troubles aren’t holding back the Swans, although after their huge summer fire-sale, you have to wonder if problems are right around the corner.


Leeds are now level with Middlesbrough after that point, but they’re not the only side on 10 points. Bolton have continued their fantastic form, after Will Buckley’s strike gave them a 1-0 win over Birmingham. The Trotters were heavily linked with the drop after finishing 21st last season, and then running in to financial difficulties in the summer. However, they managed to bounce back with a great start, which has brought them wins over West Brom, Reading and now Birmingham.

While the fixture list certainly suited them, Bolton are making the most of it. They may have taken advantage of their start to the season, but that could boost their season. In the same way that Stoke’s start has given rise to negativity, Bolton’s positive start should boost morale going forward. With Sheffield United and QPR visiting them across their next three games, Bolton’s great start might hang around for a little while yet.


After losing 10-1 on aggregate in their last two games, the pressure if firmly on Steve McClaren. The QPR boss saw his side beaten 3-0 at home to Bristol City, days after a 7-1 defeat at West Brom. Obviously the manager has to be questioned after that, but it’s not like he’s guided a successful club to the bottom of the table, he’s been anchored with a sinking side.

QPR were weakened in the summer, and now a transfer embargo has prevented them from doing anything about it. Of course, that came along with a mammoth Financial Fair Play fine, which has already removed the clubs’ ability to make moves in the transfer market. With key players leaving, budgets being slashed and even the chairman deciding that it’s time to move on, McClaren must be wondering what he’s got himself into. To make matters worse, next up for McClaren and the Rs it’s a Wigan side fresh from a thumping midweek win over Stoke.