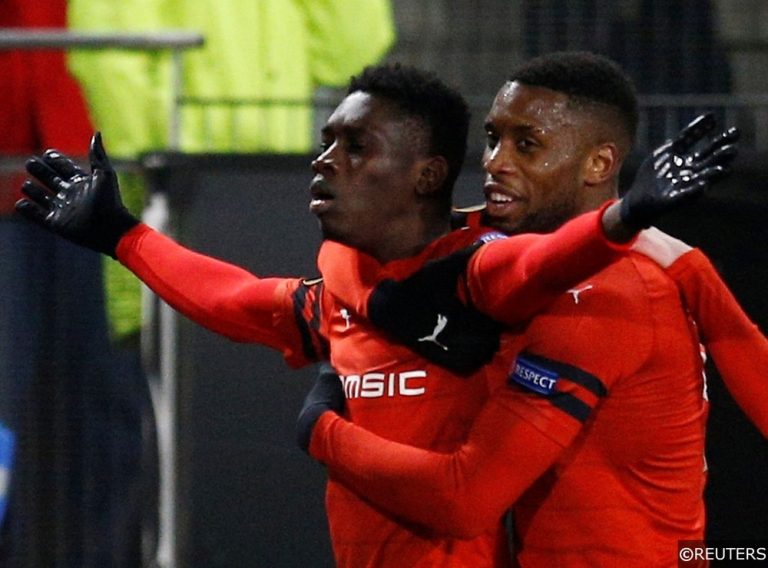 Everyone loves a goalscorer, and France has quite a few on offer that light up stadiums across the country on a regular basis. Be it the well-known names of Kylian Mbappé and Mario Balotelli or the more niche selections like Ludovic Ajorque and Remi Oudin.

Some tasty fixtures are on the list for this weekend and we think that some point in the direction of a certain few attackers. We’ve collated a list of our four favourite selections for the anytime goalscorer market this weekend and put together a little acca that you can back at the bottom of the article.

You can find all our match previews for this weekend’s Ligue 1 matches by clicking here.

Reims got promoted back into the top tier of French football by winning Ligue 2 last season and have managed to continue their fine form with a variety of incredible attacking performances, showing they have no fear despite being the league’s new boys. They had a slow start to the season with just five goals in their first nine games but many of their players have now matured into incredible attacking talents, one of which is Rémi Oudin.

The 22-year-old Frenchman is their top scorer with nine goals in 29 league games, which isn’t an incredible stat on its own but he really is in a purple patch when you realise five of those have come in his last seven games. The winger is devastating when cutting inside and will be eager to get on the scoresheet after his team’s 14 match unbeaten streak was ended on Wednesday. Reims face 2nd placed Lille which will be a real challenge but Oudin scored when these teams last met. Lille have only kept four clean sheets in their last 17 away games so we’re backing the home side to score here with Oudin our favourite to hit the back of the net.

Our Reims vs Lille match preview can be found here.

We’re not really sure what made Toulouse loan out Andy Delort at the start of the season but les Violets’ loss has definitely been Montpellier’s gain this campaign as the Frenchman is currently their top scorer with eleven league goals. He has very much been a busy player in scoring and creating as he has had a hand in twelve of Montpellier’s last 20 goals, netting six of them.

FT Montpellier 2-0 Guingamp
Delort and Ristic goals plus a first clean sheet in 6 with the return of Pedro Mendes (coincidence? absolutely not!) give MHSC a comfortable win. They climb to 7th; EAG remain second-bottom.

He has scored twice in his last three games and has a terrific record against Nice which could see him net again here. Of all the teams that Delort has faced over the years, one of his favourite opponents is definitely Nice. They are his second most fruitful opponent as he has scored four goals in his last eight games against the Eagles and with him on a good scoring run, we’re backing him to convert again here.

You can find our full preview for the match by clicking here.

Many weren’t sure how Dembélé would cope with the step up in quality when he joined Lyon from Celtic but he has proved a lot of doubters wrong with a variety of incredible performances. The French u21 international has filled the position of striker with aplomb, only adding to the already fantastic attack that Lyon possess.

22-year-old Moussa Dembélé takes the responsibility over Nabil Fékir & Memphis Depay to fire in a penalty to level tonight's Coupe de France semi-final with Rennes. French forward continues to assert himself as the incontrovertible leader of Lyon's attack in 2019.

He has recently been on a great run of form with six goals in his last six games and the striker scored a brace when Lyon last played Dijon in September. Lyon have scored 17 goals in their last five clashes against Dijon and with the Mustards sitting rock bottom of the table, we’re backing them to do so again with Dembélé very much involved in the scoring.

Click here to go to our match preview for Dijon’s trip to Lyon.

Watford fans, look away now as we’re backing former Hornet M’Baye Niang to score this weekend. The Senegalese international has been in fine form recently with five goals in his last eight games and we’re predicting him to keep that going after he scored the opener in Rennes’ midweek 3-2 victory over Lyon. This massive win has brought an incredible feel-good factor back to the club and they’ll be raring to go ahead of this clash with Angers who sit just one place below them.

Niang is Rennes’ top goalscorer in the league and acts as the target man that the team revolves around. He was incredible in midweek and we’re backing him to score again here.

Our full match preview can be found here.

We’ve also collated all the above selections into an acca that you can back with one click below!