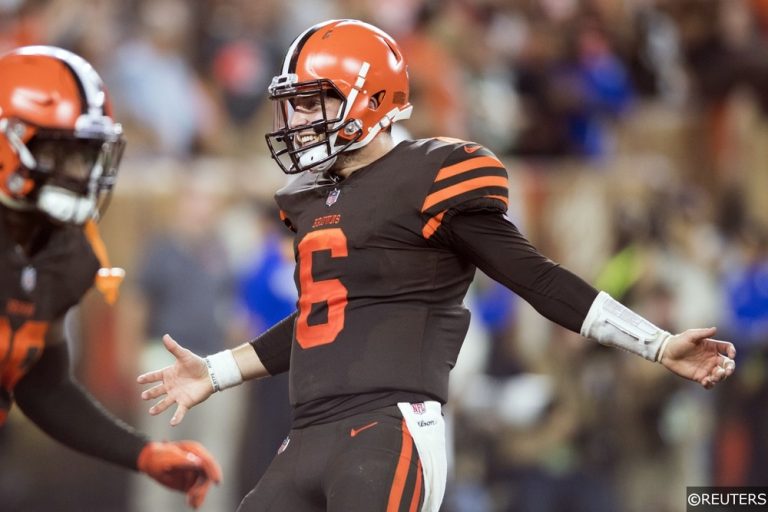 Cleveland, you did it.

Last night history was made, as the Browns won their first game in nearly two calendar years, 635 days to be exact. It had been 19 consecutive games without a win for the Brownies up until their win over the Jets last night. FirstEnergy Stadium was completely sold out with 67,431 restless Browns’ fans, and the streets of Cleveland were closed off for viewing parties. The scenes from the city once the Browns sealed the win were breathtaking, as it looked like the entire city was finally able to get that nagging weight off of their shoulders. They celebrated as if it was a Super Bowl win, and who can blame them. But just remember Browns’ fans, that when you attend a party you usually write a thank you note to the host(s) for having you over. For you Cleveland, that one very big thank you letter should be written to rookie QB Baker Mayfield.

For those of you who didn’t watch the game, it couldn’t have started out worse for the Browns. The offense literally couldn’t advance the ball past the line of scrimmage, as their starting QB Tyrod Taylor went 4-14 for 19 yards passing in his 1.75 quarters of play. Taylor missed a couple deep balls to speedster Antonio Callaway, some of which would’ve been sure touchdowns. The Jets were gifted great field position on a blocked punt, which eventually led to a touchdown by the former Browns’ RB, Isaiah Crowell. 7-0 Jets.

Another Browns’ drive is stalled, and the Jets take possession yet again. The Browns’ miss a sure interception that would’ve given them the ball back, but instead it goes right through their hands. The Jets run the ball down Cleveland’s throats, and score again on another Crowell touchdown.

Crowell then gets a flag for his celebration, which consisted of him wiping his butt with the football and throwing it into the stands. 14-0 Jets.

The Butt wipe always gets a flag pic.twitter.com/KIZ6f3HlMJ

At this point, the stadium starts to boo the offense as they walk back onto the field. Another possession goes by, and another Browns’ punt ensues. But this time, QB Tyrod Taylor walks off into the blue tent on the sidelines to get evaluated for a concussion. The stadium seemed to hold their breath. Is it Baker time?

After getting a defensive stop, the Browns get the ball back and the rookie QB Baker Mayfield comes running out onto the field with his helmet on. The stadium erupts with “We want Baker” chants, and the offense that looked dead suddenly gets a much needed spark. Mayfield went right down the field, making a couple really nice throws through tight windows in zone coverage. The Browns walk away with a field goal. There is life in Cleveland as the Browns walk into the locker room. 14-3 Jets at half.

The second half was dominated by the Browns’ defense. Their defensive line started to pick up the pressure on Jets QB Sam Darnold, and it showed as Darnold missed a couple easy throws throughout the second half. Darnold ended up completing only 15 of his 31 attempts for less than 170 yards while throwing two INTs. The Jets only seemed to have success on offense when they ran their WR screen off their stacked WR set, but other than that the offense wasn’t very threatening.

After trading punts, the Jets were moving the ball in their own territory until Browns’ rookie CB Denzel Ward forced a fumble that would eventually lead to another Browns’ field goal. 14-6 Jets.

Another Jets’ punt gave the ball back to Baker, who led a 7 play, 69 yard touchdown drive to bring the Browns within two. The Browns originally missed the two-point conversion, but there were offsetting penalties that gifted the Browns another chance. With their second attempt, they ran the famous “Philly Special,” in which Mayfield ran out on the left and caught the conversion from WR Jarvis Landry. All knotted up at 14.

The Jets respond with a field goal, but the Browns counter with seven minute drive that ends with a Carlos Hyde rushing touchdown. Mayfield was exceptional on the drive, showing great pocket presence while throwing absolute darts to his wideouts. 21-17 Browns.

With less than two minutes, the Jets take the field with the ball, needing a TD to end the Browns’ hopes of victory. But 3 plays in, Darnold throws an interception into double zone coverage. The Browns take over and run the ball 3 times, forcing the Jets to burn all of their timeouts. After not picking up the game-ending first down, they punt back to the Jets who now have less than a minute.

QB Sam Darnold drops back on 2nd and 12, and throws a deep ball intended for Jets WR Robbie Anderson, but it is intercepted by Browns’ CB Terrance Mitchell. Baker and the offense come on the field for the game winning kneel, and the entire stadium lets out a sign of relief. The Browns win, 21-17. (Yes, you read that correctly.)

And hopefully you won as well by following our tips for this game, as we recommended the Browns -2.5 at 3 stars of confidence and Under 39 on the points total at 2 stars.

Time to go home right? Not quite.

If you haven’t heard, Bud Light ran a promotional campaign in which they placed 14 “Victory Fridges” around the the city of Cleveland, each of which that were filled with a little more than 500 Bud Lights. The fridges had a padlock on them, and writing on the door that read, “When the Browns win, Cleveland wins.” The fridges were to be unlocked if the Browns ever won a game this season.

Cleveland, the @Browns won. The fridges are open. Go celebrate with a Bud Light. You’ve earned it. pic.twitter.com/RvjJ0WvpyO

So after the final whistle last night, the fridges opened and gave all who were around the pure taste of victory. Beer and happiness overwhelmed a city starved of victory. It was quite the moment, as the streets flooded with relieved Browns’ fans and Bud Light. The years of pain were over, history was made.

Congrats Cleveland, have a cold one on us. You’ve earned it.