Brazil’s World Cup build-up was overshadowed by constant speculation over the state of a small bone in Neymar’s right foot but so far at least, it hasn’t been Brazil’s usual talisman that has been their main source of inspiration. Targeted by opponents and short on match sharpness, Neymar has struggled to stamp his authority on this World Cup in the same way that other global stars such as Cristiano Ronaldo and Harry Kane have managed. However fortunately for Brazil, Philippe Coutinho has stepped up to the plate with some vital contributions to keep Tite’s men on course for the knockout stages despite some team performances that have failed to capture the imagination.

Coutinho’s international career has been a stop-start affair since he made his debut as a precocious teenager back in 2010. Left out of Brazil’s squad for the 2014 World Cup on home soil, he perhaps dodged a bullet given how that campaign ended but looking back it’s almost laughable that the likes of Oscar and Bernard were selected ahead of him.

Recalled to the set-up under Dunga in late 2014, Coutinho’s influence for Brazil has gradually increased over the past few years although he still started less than 50% of their 2018 World Cup qualifiers. He only netted his first international goal as recently as 2015 but three years on, Brazil has finally learnt to appreciate Coutinho and what he brings to this side and if his current goalscoring form continues, by the end of this World Cup his name may stand alongside some true Brazilian legends as players to have made a real impression on the biggest stage of all.

Read more: Why Brazilians are fearing a repeat of 1966 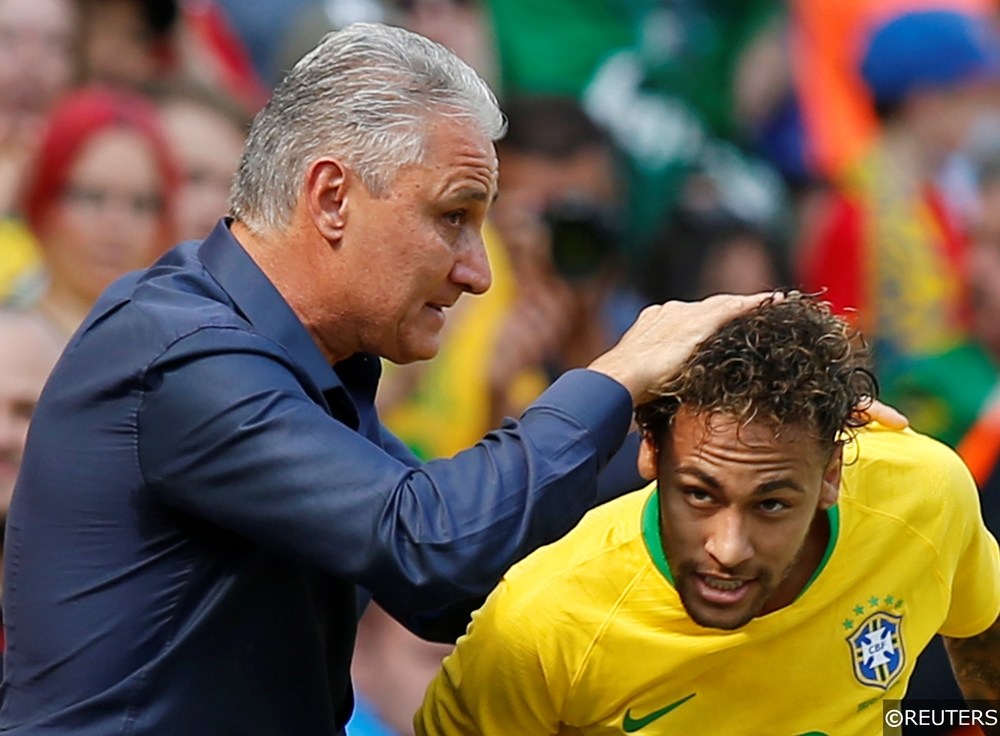 Brazil’s World Cup preparations seemed to go perfectly. Neymar came through two friendly appearances unscathed and not only that looked to have instantly returned to the exceptionally high level he has produced over the past few years for club and country. His performances seemed to confirm he would be fit to take a full part in the 2018 World Cup, something that was always going to be key to Brazil’s chances.

Out of all the major forces, Brazil’s warm-up friendly showings were the most impressive. They beat a strong Croatian side 2-0 at Anfield before hammering Austria in Vienna. With only one change between the two matches, Tite appeared to make a clear statement as to his preferred starting eleven and there were none of the selection headaches that some of the other favourites for success in Russia were having to deal with. Brazil headed into the World Cup with just 1 defeat in 21 matches under Tite and as favourites to clinch the trophy for the sixth time.

Switzerland were always likely to be awkward first opponents for Brazil. Always tough to beat and with a fair amount of major tournament experience behind them, the Swiss were in no mood to go soft on Brazil or particularly Neymar in a bruising clash in Rostov. However it only took twenty minutes for Brazil’s World Cup campaign to really burst into life in the form of a trademark long-range effort from Philippe Coutinho.

With a 1-0 advantage, it appeared Brazil had done the hard work in breaking an organised Swiss defence down and would go on to claim an easy victory with the Europeans needing to open up a bit in search of an equaliser. However that was not how the game panned out. With Neymar being tightly-marked, Brazil struggled to create many clear openings and conceded for the first time in six matches as their opening game ended in a frustrating draw. The result once again sparked doubts over Brazil’s ability to convert good form in friendlies and qualifiers into the cut-throat business of tournament football.

Read more: A slow start against the Swiss

For 90 minutes, those doubts lingered as Brazil made hard work of what was supposedly their easiest group fixture against Costa Rica. Again they struggled to open up an organised side adopting a predictably defensive approach. Neymar once more looked a bit off the pace at times with his most notable contribution seemingly set to be a comical fall that briefly won a penalty for his side only for VAR to rightly overturn it.

Tite looked on quizzically from the sidelines, trying to figure out how a side that had breezed through qualifying were making such hard work of a game against limited Central American opposition. A huge Brazilian following were getting increasingly agitated in the stands with the prospect of their side heading into their final group game with just two points on the board and in real danger of a first World Cup group exit since 1966.

However as the game moved into Stoppage Time, Coutinho struck to break Costa Rican hearts and relieve Brazil’s blushes. It was more of a poacher’s goal this time as the Barcelona man pounced to poke home from eight yards after an excellent knock-down from Roberto Firmino, his former teammate at Liverpool. Neymar tapped in for a second in the dying moments of the game as Brazil finally had space to play in and a 2-0 winning margin masked what was a very nervy afternoon for the South American giants.

Read more: How have Brazil changed under Tite?

Despite the win over Costa Rica, Brazil still have work to do heading into their final group game against Serbia. A draw would be enough to see Tite’s men into the last sixteen but defeat would almost certainly see them packing their bags for a long flight home. Therefore Brazil can ill-afford an off day against the side from the Balkans, who have performed pretty well so far at this World Cup and may just be a wounded animal following late heartbreak and controversy against Switzerland.

Even so, you’d have to expect Brazil will handle the pressure and get at the very least the point they need to progress into the last sixteen, which is the point when things could get very tasty. If Brazil hold onto top spot in Group E, they will most likely face a huge clash against Germany in the next round. It would be the first competitive meeting between the sides since the horror-show that was Brazil’s 7-1 defeat against Joachim Löw’s side at the Semi-Final stage in 2014. It would be a good chance to both banish that ghost and also knock one of their main rivals out of the tournament but realistically Brazil would still much prefer an easier last sixteen tie with Mexico, Sweden and more improbably South Korea the alternatives.

While there is plenty of football still to be played, should Brazil progress to the last eight then Belgium, England or perhaps Colombia are their most likely opponents. They’d fancy their chances against any of those sides you’d imagine but they can’t afford to get ahead of themselves with some major hurdles to overcome just to reach the last eight.

As well as trying to secure progress, Tite will be hoping to see more from the likes of Neymar and Gabriel Jesus against the Serbs next time. Neither has hit anything like top form yet and Roberto Firmino is certainly pushing Jesus for a starting role. However with Coutinho fit and firing, Brazil are no longer dependent on Neymar for inspiration and so far at least the PSG man has certainly been outshone by his teammate.