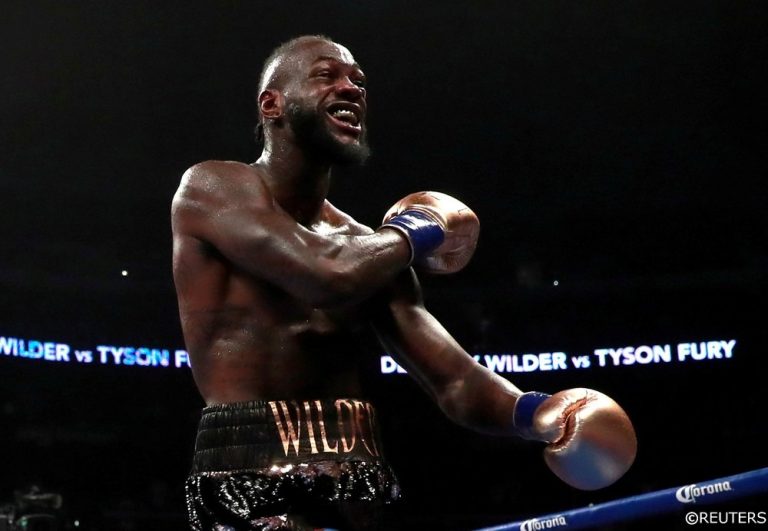 Deontay Wilder returns to the ring this weekend for his first outing since last year’s defeat to Tyson Fury as he takes on Robert Helenius at the Barclays Center in Brooklyn.

The former WBC heavyweight world champion is trying to work his way back towards a world title fight, potentially a fourth meeting with Fury, and has lined up a difficult fight for his comeback.

We’ve got the main event covered, as well as a 27/1 accumulator covering the undercard.

Where to watch Wilder vs Helenius

The fight takes place at the Barclays Center, Brooklyn, and the main event will begin at around 4am on Sunday morning for viewers in the UK (11pm local time).

No UK broadcasters are showing the fight but boxing fans can watch Wilder vs Helenius on Fite TV PPV at a cost of $14.99 (£13.52). The action can be live streamed on the Fite TV app, which is available for download onto mobile or tablet devices.

Who is on the Wilder vs Helenius undercard?

There was speculation Wilder could opt to call time on his career after his second defeat to Fury last year but the Bronze Bomber has decided to continue.

The American, who will turn 37 later this month, has a sensational knockout record with 41 of his 42 victories coming via stoppages. The only blemishes on his record are a pair of defeats and one draw, all of which have come against Fury.

Helenius should provide Wilder with a test and the Swede knows if he can pull off an upset he would be in the mix for a world title shot himself. The Nordic Nightmare has 31 wins (20 KOs) and three defeats on his record, having been stopped twice. Helenius did manage to go the distance in a loss against a big puncher in Dillian Whyte, but given Wilder’s incredible power anything other than a stoppage win for the American would register as a shock.

Wilder will be looking to make a statement as he returns to action after a long absence and he can add yet another KO to his record. The Alabama-native is just 1/4 to win by KO, TKO or Disqualification so for a bit more value the 4/6 on Wilder to win in rounds 1-6 appeals, as Helenius has been stopped twice in his career and three of Wilder’s last five victories have come before the start of the sixth round.

Gary Antonio Russell and Emmanuel Rodriguez met last year but the fight ended up being a no contest due to a clash of heads in the first round, leaving the latter bleeding and unable to continue.

Former IBF bantamweight champion Rodriguez is the underdog but has more experience than southpaw Russell, who remains unbeaten after 19 fights. Rodriguez put in a really impressive display against Roberto Sanchez Cantu is his last outing, ending the fight in the first round with an accurate bodyshot, and can back that up by inflicting a first defeat on Russell.

Caleb Plant saw his unbeaten record ended by Saul ‘Canelo’ Alvarez in his last outing but he can get back to winning ways against Anthony Dirrell at the Barclays Center. Dirrell is a decent competitor but Plant should have too much quality, although he may need the judges to claim the victory against an opponent who has only been stopped once in a 38-fight career.

There is another heavyweight match-up on the Wilder vs Helenius card as Cuba’s Frank Sanchez faces Carlos Negron of Puerto Rico. Negron hasn’t fought for over a year and may struggle to keep up with the pace of Sachez, but he has still perhaps been underestimated and can at least hear the final bell. All three of Negron’s defeats have been via stoppages but he has won each of his last five fights.

Sanchez is unbeaten after 20 fights and has 13 wins by KO, but his last two victories came via points and he may need the full 10 rounds against Negron in what looks a closer match-up than the odds suggest.

Deontay Wilder to win in rounds 1-6 vs Robert Helenius