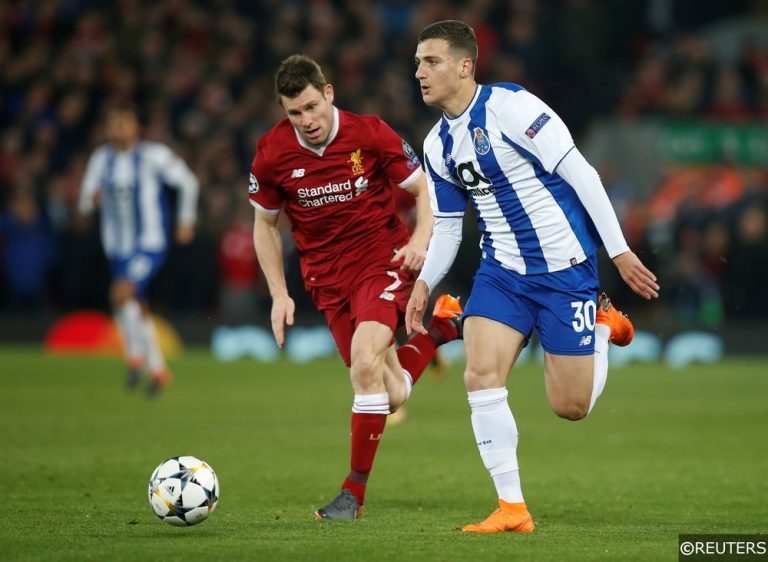 Just one day after securing their first signing of the summer, Manchester United added the second new name to their squad by closing a deal for FC Porto full-back Diogo Dalot. Having tied up a deal for Brazilian midfielder Fred for a free in the region of £50m, United strengthened their defensive options by sealing the transfer of Dalot, moving quickly to finalise a deal for the 19-year old.

Who is Diogo Dalot?

That’s a question that many Manchester United fans are asking. Born on 18th March 1999, just a couple of months before United sealed their historic treble (how old do you feel now?), Dalot joined Porto at just 9 years old having spent two weeks training with their Primeira Liga rivals Benfica in Lisbon. The commute to Benfica’s training ground from his hometown Braga was too lengthy an excursion for Dalot however, who chose instead to take up Porto’s offer. Based just forty minutes away, Porto was the better choice both logically and logistically for the in-demand youngster.

Dalot rose quickly through the youth ranks at Porto and he impressed enough to be drafted in to train with the first team at just 16 by former Dragões Coach and current Spanish national team Manager Julen Lopetegui.

Having been a standout player in the Porto B team, the flying full-back made his first-team debut at 18 in October 2017, starting in a 6-0 win against Lusitano G.C. in the Taça de Portugal. Dalot made his Primeira Liga just a few months later in February 2018, coming on as a 75th minute substitute against Rio Ave.

Dalot came off the bench again in Porto’s next league game against Estoril, playing at left back to replace the injured Alex Telles. Dalot made the most of Telles’ enforced absence, starting the next five fixtures in a row, including Porto’s 2-1 O Clasico win against Sporting Lisbon and their 0-0 draw at Anfield in the Champions League, where he kept Sadio Mane quiet down the Liverpool right.

Having been strongly linked with moves to Real Madrid, Napoli, Juventus and Barcelona (Barca had a £10m bid rejected for him in the summer of 2017), Manchester United swooped in to activate the release clause in Dalot’s contract, believed to be in the region of £19m.

Dalot signed a five-year contract with the option of another year to become Jose Mourinho’s first Portuguese signing for Man Utd.

Does Diogo have “Da-lot”? It would certainly seem so. Described as “a modern fullback, with an appetite for attack” on Porto’s official website, Dalot can operate on either flank, though he prefers to play at right-back. Dalot likes to join the attack at every opportunity and is adept at picking out team mates from dangerous attacking positions. Quick, physically strong and technically gifted, Dalot has all the attributes you’d want in a fullback, though naturally for a player his age, he is lacking in top-level experience.

“It’s a kid who has done an exceptional job in team B. Dalot has very good behaviour, but it’s just a game. Success has nothing to do with one or another good performance, but rather give continuity and assert himself more at FC Porto. He has the quality to do so. He is a great player.”

“Diogo is an extremely talented young defender with all the qualities to quickly become a great player for this club.He has all the attributes that a full-back needs: physicality, tactical intelligence and technical quality, combined with a Porto Academy mentality which prepares players for the maturity they need at the professional level.In his age group, he is the best full-back in Europe and we all believe he has a bright future ahead of him at Manchester United.”

“I already knew him. He is very powerful and knows what to the in the pitch. He is very grown up for his age. Porto has an amazing prospect on his youth team”

“With his potential, character and personality, he can go as far as he wants. I will see him as one of the best in the world in a few years’ time”.

“Joining Manchester United is an unbelievable opportunity for me. I have grown up in Porto’s Academy and I am so thankful for everything they have done for me. But the chance of coming to the biggest club in the world is something I just couldn’t turn down.”

Where does he fit in at United?

Both current first-choice Manchester United fullbacks Antonio Valencia and Ashley Young will be 33 before the 2018/19 season starts in August. The veteran defenders are still solid if unspectacular performers, though both tend to fall short in their contribution further up the pitch.

This is an area in which Dalot seems to excel. The teenager used his trademark bursts of speed to push past opponents and generally is composed enough to pick players out from the byline and wide positions.

Despite seeing a huge amount of the ball in forward areas, Antonio Valencia provided just one assist in his forty-two appearances for Man Utd last season. Jose Mourinho will hope that Dalot can provided much more thrust and end product from the same position.

With Matteo Darmian close to completing a move back to Italy and Luke Shaw’s future in the balance, Dalot shouldn’t be short on game time this season, with his versatility allowing him to fill in on either side. Ideally, the promising youngster will be introduced slowly before displacing Valencia on a more permanent basis as the season progresses.