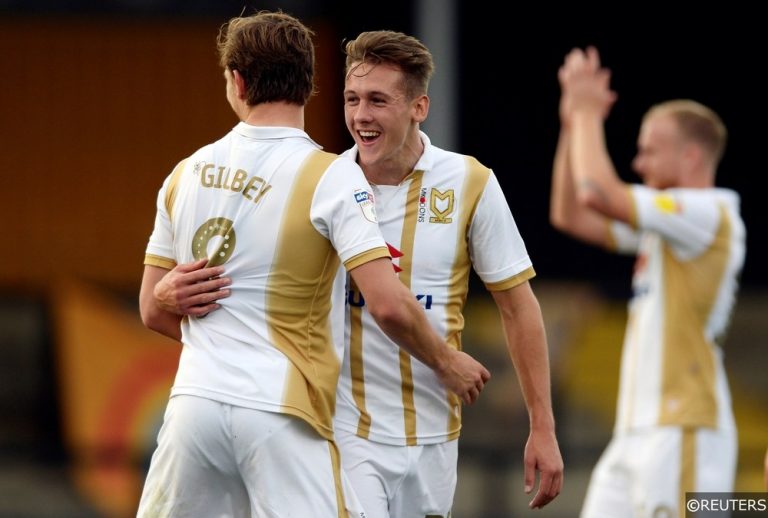 After last Saturday’s 12/1 winning treble, we dive back into League’s One and Two ahead of match-day five. This week we’ve highlighted three games for an ‘Over 2.5 Goals’ bet.

You can find detailed analysis, predictions, and betting tips for all this weekend’s action in our Match Previews section.

The goals have been coming thick and fast for MK Dons, who were involved in a five-goal thriller last weekend, before their home fans were treated to three goals on Tuesday evening.

Going forward, the Dons have impressed over the last week or so, as they’ve scored four goals in two matches, posting expected goals for figures of 3.43 and 1.75. However, at the other end of proceedings, Paul Tisdale’s men, who’ve shipped four goals in their last two matches, have looked somewhat shaky. Not only have they conceded plenty of goals, but they’ve surrendered expected goals for figures of 1.71 and 2.36, which suggests that they’ve been easy to create against.

After hurting both Wycombe and Lincoln with the ball, the Dons ought to do some damage against Peterborough, though their defensive antics are a worry, especially as Peterborough come into this game off the back of two good attacking efforts, scoring four goals in two matches. Given the numbers on offer, ‘Over 2.5 Goals’ looks a good bet when the Dons host Posh on Saturday afternoon.

Scorers of four goals in two games, Wycombe have done a pleasing job in the final third over the last week; they notched three goals at home to MK Dons last weekend, while they went away from home and got on the score-sheet against a solid Fleetwood side on Tuesday night.

If we look the efforts of the Chairboys last weekend, who notched three times and created a pleasing 1.71 expected goals for, then it’s easy to envisage them thriving offensively against a Southend side that has struggled at the back. Then again, the visitors certainly shouldn’t be written off from an attacking point of view, despite their recent struggles. Wycombe, who surrendered a whopping 3.43 expected goals last weekend and who gave up 2.14 in the week, have looked very shaky of late, so this is also a good opportunity for Southend to do the business going forward.

In League Two, Leyton Orient vs Crawley has goals written all over it. Orient may have scored just four goals in four games this term, but over the last week or so, they’ve started to show that they’re a team full of attacking quality. Ross Embleton’s men posted 1.8 expected goals for last weekend, while they shifted through the gears to deliver 2.04 on Tuesday evening, notching three goals in the process. Then again, they did concede twice and surrender 1.91.

If we combine such numbers with the fact that Crawley, who by adopting a cavalier approach have scored at least twice in each of their last three, have been unable to avoid goals over the first few weeks, averaging 3.00 goals and 3.26 expected goals per game, then ‘Over 2.5 Goals’ starts to make plenty of appeal at the prices.