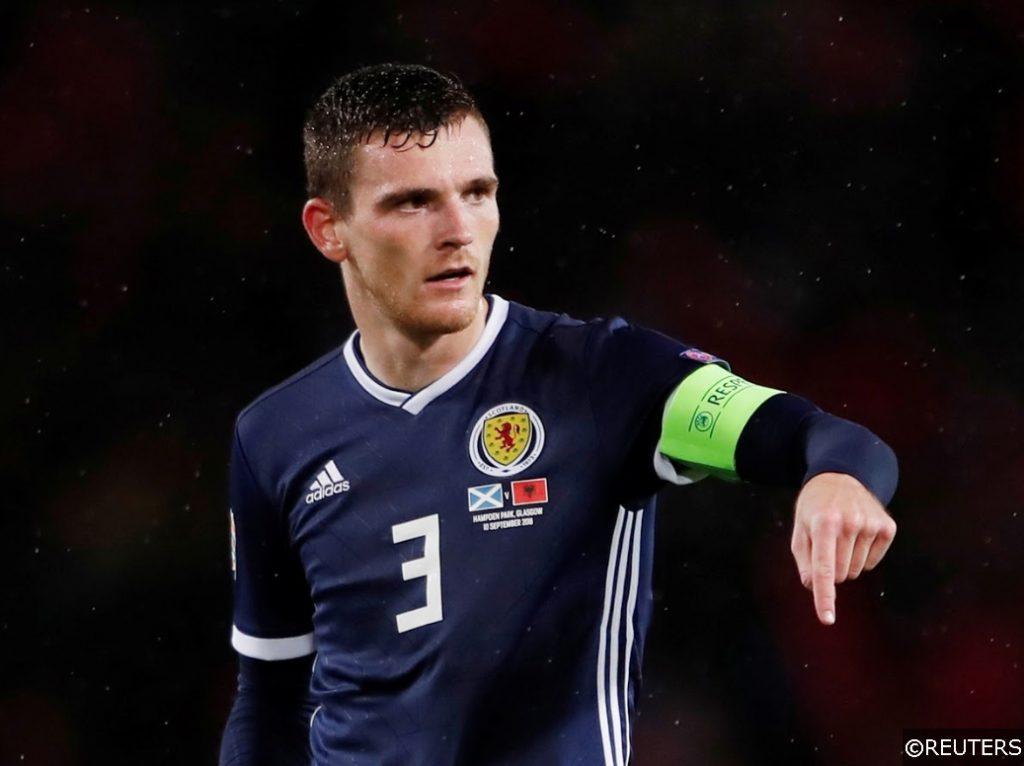 November’s international break is crammed full of exciting looking contests; however, Thursday’s quartet of Euro 2020 play-off fixtures stand out as this week’s most significant skirmishes.

On what is certain to be a monumental evening of football, eight nations stand on the brink of qualification for next summer’s European Championship, though just four of them can make the final cut.

The first act of Thursday’s enthralling showcase of international action kicks off at 17:00 in Tbilisi when Georgia host North Macedonia, before a trio of clashes between Hungary and Iceland, Northern Ireland and Slovakia, and Serbia and Scotland all commence simultaneously a little later at 19:45.

Ahead of this week’s climactic qualifiers, we’ve combed through all of data to bring you the very best value bets for games, along with a tasty looking 32/1 accumulator built around our favourite selections.

Check out our picks below, and don’t forget to follow all our latest betting advice and analysis on our football predictions page.

FST Predicts: Both Teams to Score @6/5

Georgia and North Macedonia clash for the third time since September when they meet at the Boris Paichadze Dinamo Arena on a potentially historic evening in Tbilisi.

Both teams are hoping to qualify for a European Championship Finals for the first time, and the sides’ recent encounters suggest they should prove difficult to separate on Thursday’s momentous occasion in the Georgian capital.

In each of their Nations League C Group 2 meetings in September and October, Georgia and North Macedonia drew 1-1 in a pair of compelling contests that both saw penalties awarded and red cards brandished.

With those dramatic games included, both teams found the net in four of Georgia’s last six and six of North Macedonia’s last seven assignments respectively, and a similar outcome looks probable in Tbilisi this week.

Hungary can qualify for just their second European Championship since 1972 with a win over Iceland in Budapest this week, and the Magyars look well-equipped to drag themselves over the line.

Unbeaten in four of their last five matches, the Hungarians come into Thursday’s game armed with a self-belief that the visitor’s currently lack.

Iceland were turned over in four of their last five assignments, and with their inability to convert chances into goals becoming a major problem, the toothless Islanders could come unstuck again.

Northern Ireland are potentially just 90 minutes away from reaching the European Championship for only the second time in their history, though Ian Baraclough’s hopefuls must overcome a classy Slovakia side on Thursday to reached the promised land again.

Both Northern Ireland and Slovakia needed penalty kicks to book their place in the Euro 2020 play-off final after keenly contested semi-final skirmishes, and the evidence suggests Thursday’s Final should be just as tight.

Štefan Tarkovič’s Slovakia outfit look the stronger side on paper, though the Falcons’ record of just two wins in 13 fixtures on the road points to a weakness that Northern Ireland will hope to exploit.

With just two wins from 10 games, victories have been in short supply for the hosts too however, and Thursday’s play-off looks like another fixture capable of going the distance.

Scotland – unbeaten in eight games – are on their longest run without a defeat since 1988, and with a team heavily dusted with in-form Premier Leaguer performers, the Scots look strong enough to avoid defeat in Serbia this week.

The last 12 months have been unusually turbulent for the Serbians, and a run of just one win from six fixtures since November last year means they enter Thursday’s play-off looking a little vulnerable.

Steve Clarke’s side aren’t exactly prolific, though the Scots have been defending well, and carrying a run of three clean sheets on the bounce, the robust underdogs have the right mix of momentum and doggedness to avoid defeat again in Belgrade.

You can combine all four of our selections into one tasty looking 32/1 accumulator using the banner below.