Premier League managers hold one of the most precarious positions in world football. With public opinion prone to swaying from one end of the spectrum to the other after every result, top-flight bosses are never more than a few games away feeling the squeeze and getting the sack.

Last season, six of the Premier League’s head honchos were axed before Christmas, and while few of the division’s current supremos would consider their roles to be under threat at present, the 2020/21 sack race is expected to pick up speed soon.

As the season progresses, we will keep track of the latest Premier League sack race betting odds and developments below. See our predictions for the first top-flight boss to leave their post below.

Odds correct as of 11am on September 28 with Betfair 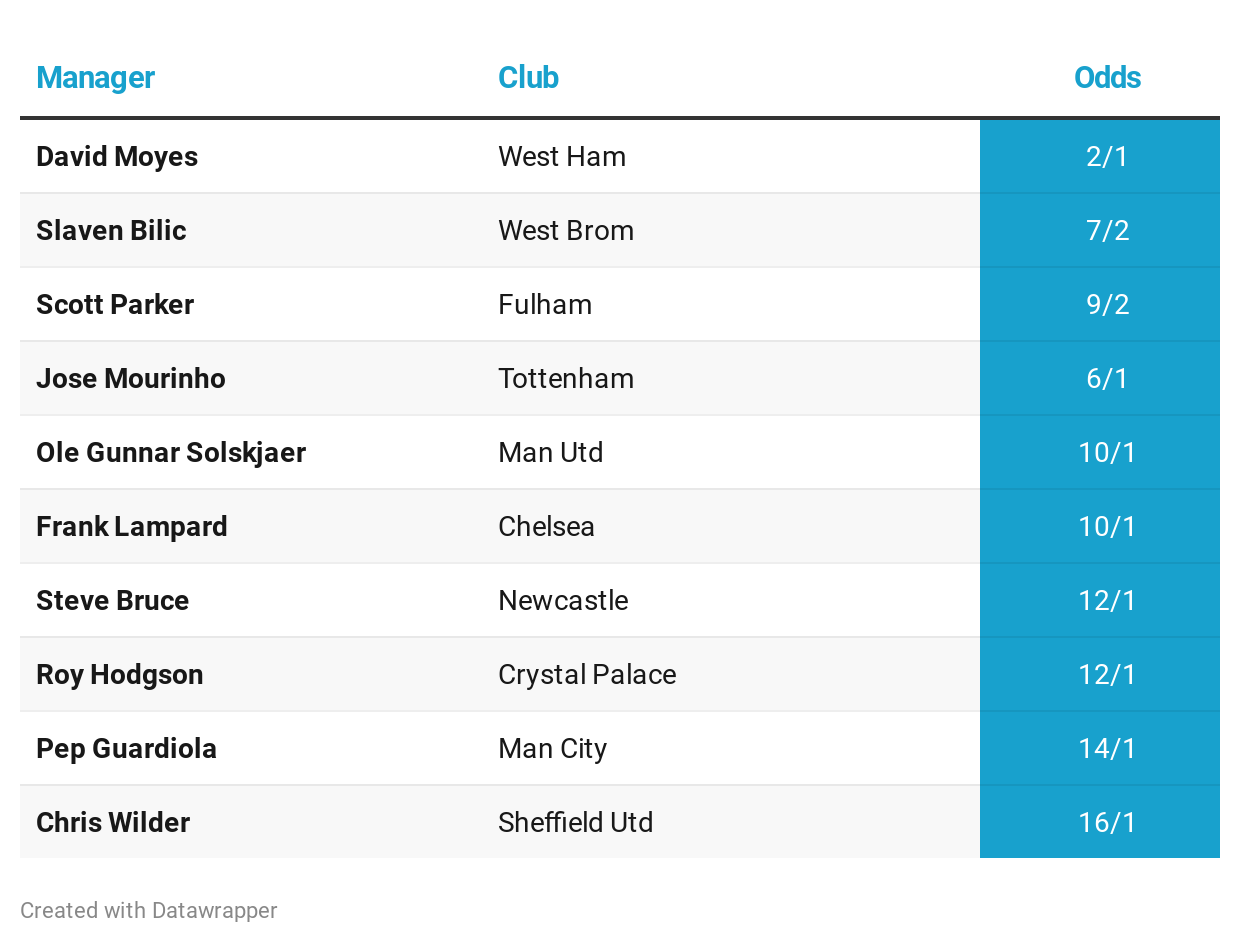 David Moyes is still the bookmakers’ favourite to be the next Premier League manager ousted from his position, however, after West Ham’s fabulous win against Wolves on Sunday evening, the Scottish coach will be feeling safer than ever.

The Hammers battered four goals without reply past a sluggish looking Wanderers outfit, however, a glance at West Ham’s upcoming fixtures suggests the positive vibes around the London Stadium could soon evaporate.

After they navigate a tough looking Carabao Cup test at Moyes’ old club Everton in mid-week, West Ham have Premier League fixtures against Leicester, Tottenham, Man City and Liverpool to follow, and a succession of heavy defeats could see the pressure increase ten-fold.

We picked out ex-England international Frank Lampard as an outsider to watch in our Sack Race update last week, and following another disappointing weekend, the odds on the Chelsea boss losing his job next have been slashed from 16/1 to just 10/1.

Following the club’s major transfer splurge in the summer, big things were expected of a star-studded Blues team this season, and while their sub-par early performances could be attributed to teething problems, Chelsea’s squad already looks worryingly unbalanced.

The Londoners found themselves three goals down at half time against an ordinary West Brom team on Saturday evening, and though the Blues did brilliantly to fight back for a point in the second period, there were enough warning signs to suggest more bumps in the road are on the way.

Slaven Bilic’s Baggies were on the wrong side of that epic Chelsea comeback, and after Albion’s Croatian supremo saw three points slip agonisingly through his fingers at the Hawthorns, the bookies cut the odds on him being shown the door next from 17/2 to just 7/2.

After their latest defensive capitulation, West Brom’s goals conceded column continues to swell, and if they can’t find a way to stem the flow of chances created against them, heavy defeats will almost certainly become common.

A kinder looking run of fixtures on the horizon – including games against Southampton, Burnley, Brighton and Fulham – looks on paper at least, to be a quartet of point-scoring opportunities, and a win of any description could help to solidify Bilic’s position at the club.

Manchester City guru Pep Guardiola was the biggest single-week mover in the Premier League Sack Race markets when the Catalan coach moved in from 33/1 to 14/1 following the Citizens’ disastrous performance and results against Leicester City.

City were trounced 5-2 by a clinical Foxes team at the Etihad Stadium in a hugely unexpected result that saw a team managed by Guardiola concede five in a match for the first time in his career.

In response to their evisceration, City flexed their considerable financial muscle to sign centre-half Ruben Dias from Benfica for around £65m, and though their decision to splash the cash suggests that the Citizens are still fully behind their manager, the club’s decision makers will want to see an instant improvement in the team’s defensive performances after another hefty outlay.

While Guardiola retains massive support among City fans, the club’s hierarchy might be starting to go a little cold on their manager, especially with last season’s Premier and Champions League failures still relatively fresh in their minds.