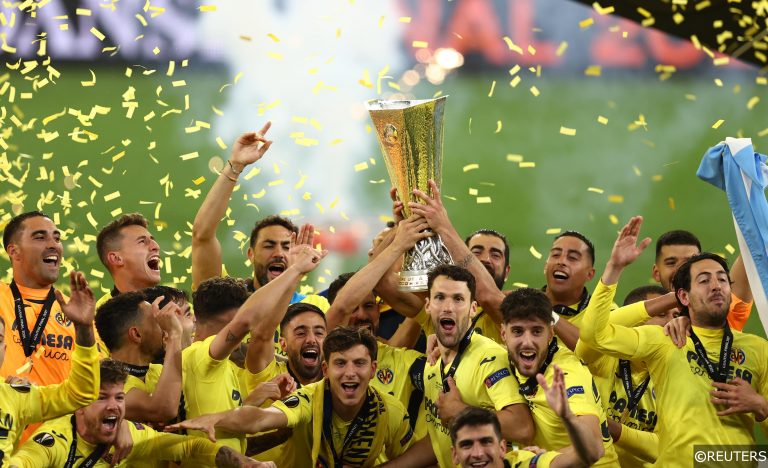 Having already done our Champions League and Europa League 2022/23 winner predictions, we are rounding off our look at this season’s continental trophies with a preview of the Europa Conference League.

This is only the second edition of UEFA’s third-tier tournament, but after Jose Mourinho led Roma to glory a year ago expect a real battle for this trophy. The sides at the top of the betting come from top European leagues and they have a rare chance at European silverware this season.

It’s little surprise that the five teams from Europe’s Big Five leagues are at the front of the betting in this competition, given the gap in resources between them and the rest. However, only one of the four from those leagues who started at this point last season made the semi-finals – eventual winners Roma.

There is a clear gap between the top three, with Nice outsiders having brought in plenty of familiar Premier League names. They added Aaron Ramsey, Ross Barkley and Kasper Schmeichel this summer, but that doesn’t quite put them in the mix with the joint favourites.

West Ham are heavily backed to make a good run after losing in last season’s Europa League semi-finals. Fiorentina are out to emulate Roma’s run last term, while the fact that Cologne have landed in a group with Nice hurts their respective chances.

Odds correct with SkyBet as of 3pm on Monday 5th September

While West Ham’s European exploits last season have made them contenders, Villarreal are the side to fear in this competition. They beat Man United to the Europa League in 2021, their first ever major trophy. Months later they pushed Chelsea in the UEFA Super Cup, but they really took a step up in last season’s Champions League.

The Spanish side made an impressive run to the semi-finals of Europe’s biggest competition. They pipped Atalanta to second spot in their group before dumping Juventus and Bayern Munich out of the competition.

Two-thirds of the way through their semi with Liverpool the Yellow Submarine had fought back to sit level at 2-2 on aggregate before the Reds took control in the second half. Back-to-back deep European runs only added to Unai Emery’s status in Europe, having made five Europa League finals – winning four.

Villarreal haven’t seen much turnover in their squad, so they should arguably be stronger favourites for this trophy. Any side capable of beating Juventus and Bayern Munich should be outmatched in this competition, especially with a squad of Europa League winners led by a manager who is a serial winner in European competition.

Having landed Cluj, Sivasspor and Ballkani in their group, Slavia Prague have a brilliant opportunity to win Group G and jump straight into the last 16 of this competition. The Czech side had to do things the hard way last term, playing in the play-off round after finishing second in their group.

They overachieved just in that group, beating Union Berlin to second-place, finishing behind eventual runners-up Feyenoord. Slavia beat Fenerbahce home and away in their first knockout clash, before seeing off Austrian side LASK. They fell in the quarter-finals against Feyenoord, but they proved themselves capable of a European run.

The final of this competition is held in Prague this year and Slavia have reason to believe they can make it. They were Europa League quarter-finalists in 2019 and 2021, while in between that they were able to pick up two points in a Champions League group of death featuring Dortmund, Inter Milan and Barcelona.

Slavia have been consistent in Europe over the years and they are exactly the kind of team this competition was created for. They are a massive 50/1 despite their European runs over recent years and with the potential for home advantage in the final they’re a great each-way bet for this competition.