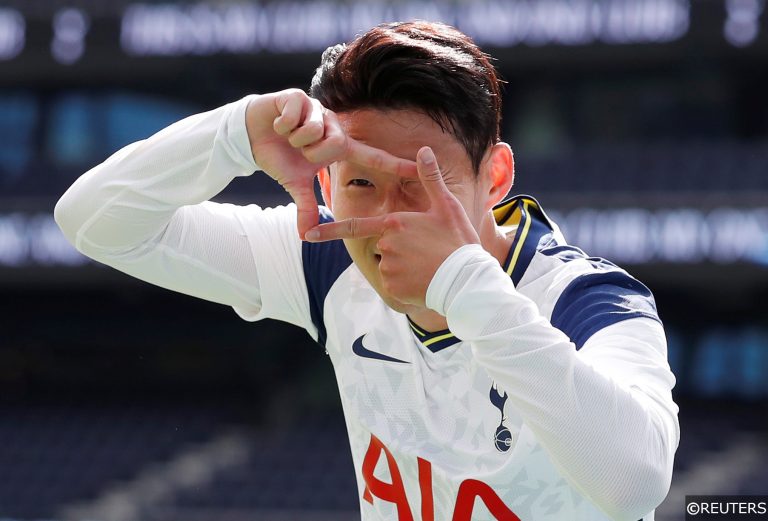 Sunday is packed with top action across Europe, so we’ve enlisted some of the Racing Post’s best tipsters to join ours in pinpointing the day’s best bets.

Mark Langdon landed his 12th straight winner last weekend and he’s chasing another on Sunday. We also have the return of the Celebrity Corner Double from two ex-professionals, following last week’s 13/2 winner from Scott Minto and Kevin Phillips.

We have a 27/1 sixfold from our experts for you below, plus this weekend’s 9/4double. You can see the rest of our tips for Sunday on our football accumulators page.

BTTS – Sheffield United vs Liverpool at 10/11

Liverpool are expected to respond after some shaky form in Sunday’s visit to Sheffield United. The Blades are bottom of the Premier League having shipped a goal in 92% of their home matches, so this could allow the Reds’ impressive attack to put on a show.

However, Jordan Henderson is the latest Liverpool defensive option to join the injury list after being used as a stop-gap central defender. The Reds have conceded in their last seven Premier League games and in 10 of their last 11 away games, so Sheffield United should add to their four-game scoring run at home.

Young Boys to beat Lucerne at 4/5

Young Boys are cruising towards the Super League title in Switzlerand, and the runaway leaders have won six matches on the spin ahead of their trip to play Lucerne.

The division’s strongest outfit lead the way by a massive 18 points in the Super League, and having enjoyed a superb Europa League win at Bayer Leverkusen in midweek, Young Boys look ready to beat Lucerne for the fifth time in a row.

Lille to beat Strasbourg at 8/11

Lille may have been dumped out of Europe in midweek but their quest to dethrone PSG in France is getting a more realistic prospect by the week.

Les Dogues have won seven of their last eight Ligue 1 outings and thrashed Lorient 4-1 away last weekend. Strasbourg may be showing signs of improvement but they have still only won one of their last six league games and defeats away to Lyon, PSG and Monaco – conceding ten goals in the process – suggest they aren’t up to the task when facing the big guns of the division.

Tottenham to beat Burnley at 1/2

Tottenham were not as good as the Premier League table suggested when they were top and nor are they as bad as the current standings following a horror run of five defeats in six.

Three of those defeats came to Manchester City, Liverpool and Chelsea, while they were without Harry Kane against Brighton and last week’s 2-1 loss to West Ham was unfortunate. They won the shot count 20-4 and had 70 per cent possession so if they play with the same attitude against Burnley it is likely to end better.

Spurs have won eight of their last nine at home to a Burnley side that have failed to score in 13 Premier League matches this term.

Mainz are raising their level when it matters most and they can enhance their Bundesliga survival hopes with another victory at home to Augsburg.

Bo Svensson’s men still sit second bottom in the German top-flight, but they have collected ten points from their last five league games, a run which has featured back-to-back home wins over title-chasing Leipzig and European hopefuls Union Berlin.

Die Nullfunfer have also earned a point at Bayer Leverkusen and recorded a shock victory at Borussia Monchengladbach within the last month and they should have little to fear hosting Ausgsburg, who have suffered defeat in six of their last eight league games.

Lyon to beat Marseille at 4/7

Jorge Sampaoli appears to be on his way to Marseille but the Argentinian could have plenty of work on his hands upon his arrival.

Marseille have managed only one win in their last nine Ligue 1 fixtures, failing to beat the likes of lowly Nimes, Dijon and Nantes as part of that run.

They look short of ideas in the attacking third but the same cannot be said for this weekend’s opponents Lyon, who still have a genuine shot at the Ligue 1 title.

Les Gones have won six of their previous seven domestic fixtures and, given that they can call on the likes of Memphis Depay and Karl Toko Ekambi in the final third, they should be fancied to come out on top in this clash.

Tottenham have been on a poor run of form to the extent I think this is must-win territory and I can see them doing just that against a Burnley side who were fortunate to get a draw against ten-man West Brom last week.

Burnley can make it difficult and frustrate opponents but Spurs have to get a result and I think they will get out of this spell having played well in the second half against West Ham.

In that game I saw Harry Kane getting back to fitness. He is the best striker in the Premier League and after a two-game drought I see him ready to hit top form.

I look at this game and think that Manchester United are being underestimated by the bookmakers for a game that I believe is much closer to 50-50.

Home advantage is minimal these days without supporters and United are a value bet in a game where the draw is a big runner despite Thomas Tuchel having made a flying start to life in the Stamford Bridge hotseat.

I remain fully of the opinion that Frank Lampard should have had more time, but Tuchel has done well at my former club.

However, in terms of the Premier League at least, it has been a comfortable set of fixtures and this is much tougher test against a United side sitting second with just one defeat in the last 19 Premier League games.

5 Managers who could replace Jose Mourinho at Spurs

Tonight’s NBA and NHL tips including a 38/1 accumulator