I’m sure everybody is already sick of hearing commentators harp on about the return of fans. Cries of “This is what we’ve missed!” have echoed around commentary gantries across the country this weekend and, while it’s quickly becoming tiresome to hear about, you can’t help but agree with them.

This really is what we’ve missed.

Football was a welcome distraction from the drudgery of pandemic life last season but there is no denying it was a sterile shadow of its former self. We welcomed it with open arms, but now we’ve remembered what it was all about in the first place.

There seems a renewed vigour about the players, too, with a particular highlight (for me, at least) being a Paul Pogba masterclass and Bruno Fernandes hat-trick to kick off a stellar Saturday against Leeds.

That was far from the only excellent performance by the home side. Tottenham upset the odds even without Harry Kane to beat the reigning champions and Watford produced a stunning display to topple Aston Villa on their return to the Premier League, and who can forget Brentford beating Arsenal on their Premier League debut on Friday night?

Does this mean home advantage has finally returned? Did it ever really go away?

The answer to both of those question is yes.

Last season in the Premier League just 38% of matches ended with the home side taking all three points. This weekend saw that rise to 70%, although a sample size of ten matches is far from comprehensive.

Let’s look lower down the footballing pyramid, then. So far this season 52% of matches in the Premier League, Championship, League One and League Two have seen the home side win. That’s up from a dismal 40% in the Covid-stricken 2020/21 campaign. 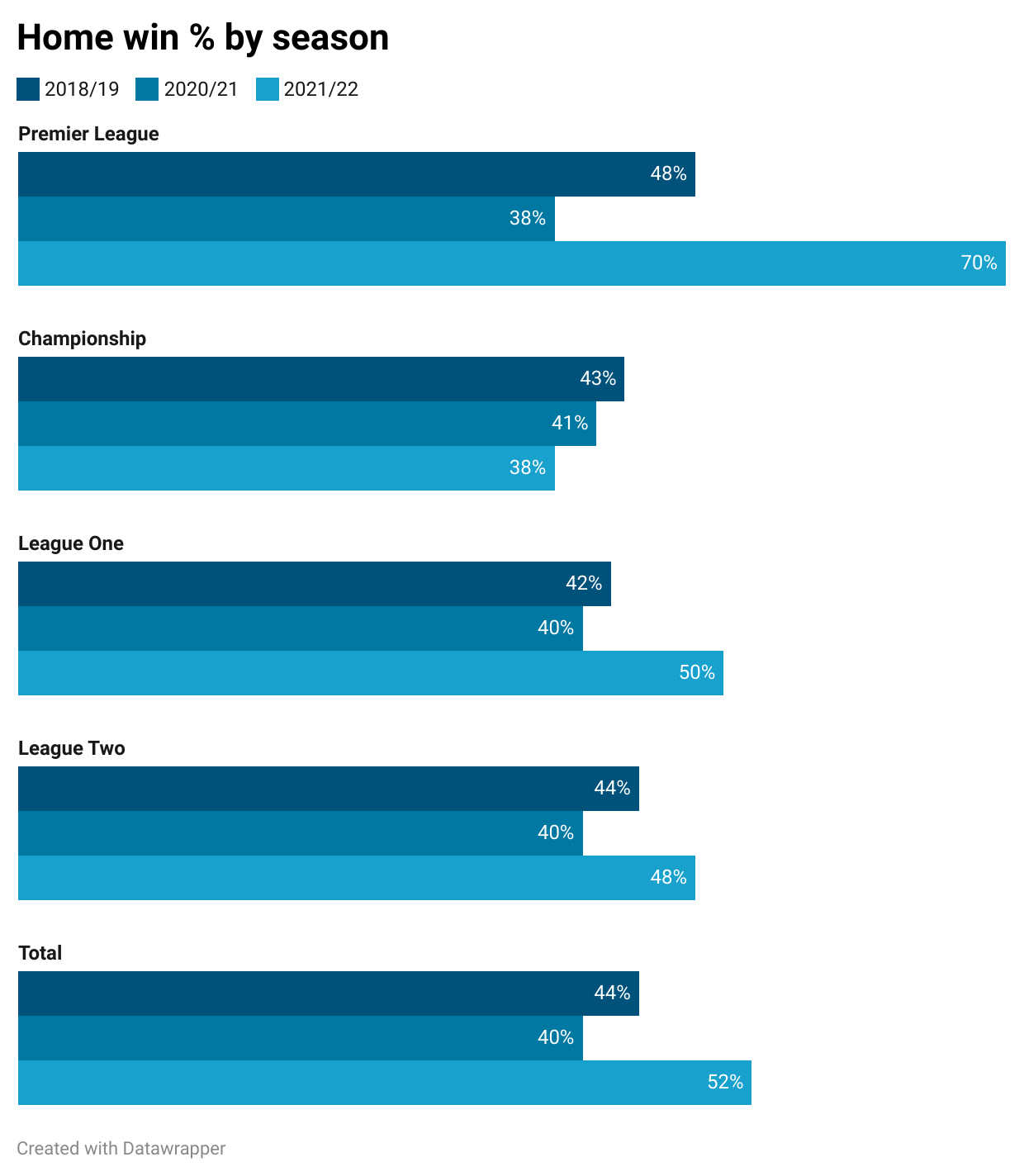 The difference is even more stark in the jam-packed Premier League stadiums. Last season, with stadiums transformed into cavernous training pitches, the home win figure was 38%. That was down 10% on the last full season of spectators in 2018/19.

So far this year it’s 70% and while this is clearly influenced by the small sample size it’s worth noting that no gameweek last season saw more than seven home winners in the Premier League. One of the two times that the opening weekend figure was matched was gameweek 38, when a limited number of fans were allowed back into stadiums.

It’s not just the data that backs this up, either. Go back and rewatch some highlights from the weekend and tell me these players aren’t absolutely loving performing in front of sold-out stadiums again. The wins, the goals and even the celebrations mean more when you can hear the joyous roar of tens of thousands of fans.

You can back all ten home sides in the Premier League to win at just over 5,000/1 this weekend, or you can sit back and enjoy listening to commentators revelling in the return of fans. Maybe they’ll have stopped banging on about it by Christmas.