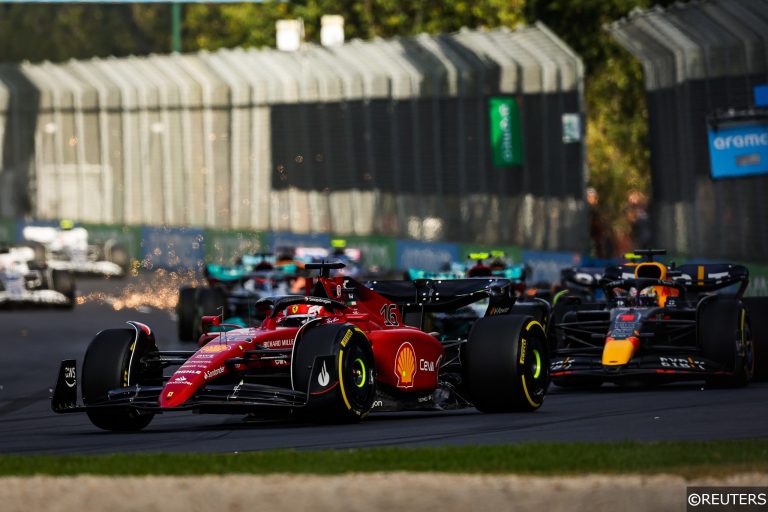 The Formula 1 entourage heads to Europe for the first time in 2022 as the teams prepare for one of two pit-stops in Italy this season.

Last year’s Emilia Romagna Grand Prix saw chaotic scenes after a heavy downpour before the race and the weather forecast indicate we could be in for more wet-weather shenanigans this time around.

Charles Leclerc took another win in Australia two weeks ago and, with Max Verstappen suffering yet more reliability issues, the Ferrari driver is now 34 points ahead of the Mercedes of George Russell and some 46 points ahead of Verstappen, while Ferrari are well in front in the Constructors Championship, too.

What is a sprint race?

Based in Imola, just an hour from Ferrari’s Maranello factory, this weekend’s race also marks the first of three sprint races this season and that alters the format of the weekend significantly.

This year there are eight points on offer for the winner of the sprint instead of the three up for grabs last season, while the points finishes extends down to eighth rather than being limited to just the top three.

The World Drivers Championship leader has beaten Carlos Sainz in all three races so far and starts this sprint from second, while his teammate is down in tenth after a crash in Q3 on Friday.

Ocon will start the sprint from 19th position while Fernando Alonso is far up the road in fifth. Cutting through that much of the field will be almost impossible for the young Frenchman so the only realistic chance of beating him would be if his teammate gets involved in an incident.

Kevin Magnussen and Fernando Alonso split the two McLaren drivers and Alonso isn’t exactly an easy character to race against, especially in relatively equal machinery. Lando Norris has beaten Ricciardo in six of the last eight races and won’t be easy to pass at Imola.

Last year’s sprint at Interlagos saw Lewis Hamilton cut through the field emphatically but this Mercedes is a very different beast. He was four-tenths down on Russell in qualifying and starts with Mick Schumacher between the pair and when he qualified 16th in Saudi Arabia he was only able to work his way up to tenth in a full race.

Sergio Perez has never beaten Max Verstappen in a race on merit, with the only times he’s finished above the Dutchman being when the defending champion has retired or had a major technical problem. He starts six places behind the pole-sitter on Saturday and it would take another retirement for him to best his teammate.

Kevin Magnussen achieved a stunning fourth position in qualifying on Friday and has already proven to have the beating of his teammate this season, while Mick Schumacher is down in 12th.

The two AlphaTauri’s shockingly failed to make it out of Q1 on Friday but Yuki Tsunoda starts just ahead of his teammate. Tsunoda’s ability largely lies in his wheel-to-wheel racing skills and with such a short race and no pitstop strategies to contend with he can hold Gasly at bay and probably make up a few places while he’s at it.

In just his second race of the season and with very little running time under his belt Sebastian Vettel wrestled a seemingly terrible Aston Martin into Q3 on Friday and starts the sprint six places in front of his teammate. He beat Stroll in four of the final six races of last season and can be confident that only a DNF would put him behind the Canadian on the grid on Sunday.

Lewis Hamilton’s former-teammate continued to impress on Friday as he qualified eighth in his Alfa Romeo, besting teammate Guanyu Zhou by six positions. He has beaten Zhou in two of the three Grand Prix this season and his only failure to do so was when he retired the car in Saudi Arabia.

The slow-speed final two sectors at Imola suit the Ferrari to the ground and Leclerc is pulling the maximum performance out of the Prancing Horse.

He was beaten by Max Verstappen in qualifying for the first time this season on Friday but has the chance to reclaim first place on the grid in Saturday’s sprint, while the Ferrari still looks to have the pace advantage around Imola.

Verstappen’s decision to push for another lap in qualifying was the main driving force behind Red Bull taking pole, while Leclerc backed off and was punished for backing off by a red flag and a return of the rain before the session resumed.

The Monegasque driver has taken the chequered flag first in two of the three races so far and came second to Verstappen in the other. That failure to win came at the high-speed street circuit of Jeddah, which was a track that favoured Red Bull’s power-focused car, although Leclerc has still managed to take the point for fastest lap in all three races this year.

Leclerc took an impressive fourth at Imola last year and I expect him to better that performance and claim a home win for the Scuderia.

Alfa Romeo have shown surprising pace this year and Valtteri Bottas’ experience has proven invaluable, with a sixth in Bahrain and eighth in Australia sandwiching a tough DNF in Saudi Arabia.

He’s not the only one surpassing expectations, though. Rookie Guanyu Zhou took a point in his first ever Formula 1 race and has been agonisingly close in the last two races, finishing 11th in both.

McLaren surprised the field with a strong performance in qualifying but Mercedes dropped further down the pecking order with both Silver Arrows failing to reach Q3, while both AlphaTauri’s were eliminated in Q1 and Esteban Ocon will start the sprint 19th on the grid.