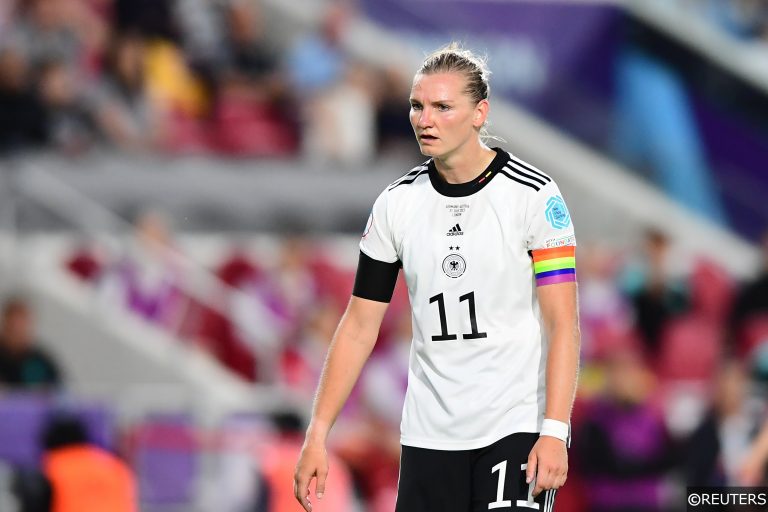 Wednesday proved to be a huge day here at FST as our 62/1 Bet Builder tip came in for the Women’s Euro 2022 semi-final tie between Germany and France.

With the new season just around the corner, our talented team of tipsters have hit some form as that was our second successive Bet Builder triumph following Tuesday’s 13/1 tip for England’s last four win over France, while we had further success with four other bets winning on Wednesday.

We’ll have another tip for the final as the Lionesses take on the Germans on Sunday so be sure to check back over the weekend, but first read on to see what we backed and to find out how to follow our tips.

Germany’s goal machine Alexandra Popp opened the scoring after 40 minutes to land one leg of our bet and just before the interval and own goal from keeper Merle Frohms drew France level and ensured two legs were decided before the interval.

Popp grabbed her sixth goal of Euro 2022 with just under 15 minutes of normal time remaining but we were still waiting for a Lena Oberdorf card going into injury time. Late drama ensued, with Oberdorf picking up her third yellow card of the tournament in the fourth minute of added time as Germany held on for the win to see our bet over the line!

Our Bet Builder win on Tuesday was accompanied by an anytime goalscorer ‘Bet To Net’ double and we repeated that feat again on Wednesday.

Popp was included on Wednesday’s bet alongside Sandefjord’s Mohamed Ofkir, who opened the scoring in their 2-0 win over bottom club Kristiansund in Norway’s Eliteserien.

There was further success with two single wins as our Over 2.5 Match Goals Best Bet landed courtesy of Raufoss’ 4-0 win at Fredrikstad in Norway’s second tier and both teams to score was our top pick for the Euro 2022 tie.

Our MLB team have been in fine form of late too and on Wednesday they recorded a fifth straight Best Bet win thanks to Cleveland Guardians’ 7-6 victory over Boston Red Sox at Fenway Park.