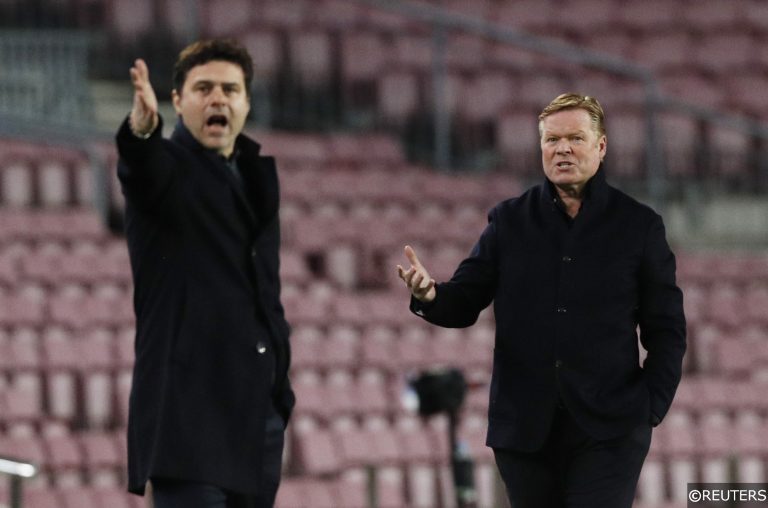 The crème de la crème of European football will meet across the continent later this week when the battle between the final 16 teams in the Champions League resumes with four mouth-watering ties on Tuesday and Wednesday evening.

The business end of the world’s most exciting club competition is fast approaching and with finalists from each of the last four years competing this week, the concentration of quality is immense.

Bet builders and same-game multis have been seen a massive rise in popularity over the last year or so and, with so much high-class action to look forward to, there is plenty of choice for punters looking to build their own customised selections and same-game multi bets. With that in mind, we’ve assembled a Champions League bet builder guide below packed with key stats for this week’s quartet of Last 16 tussles.

Remember – we’ll be covering every game in detail over on our Champions League predictions page. 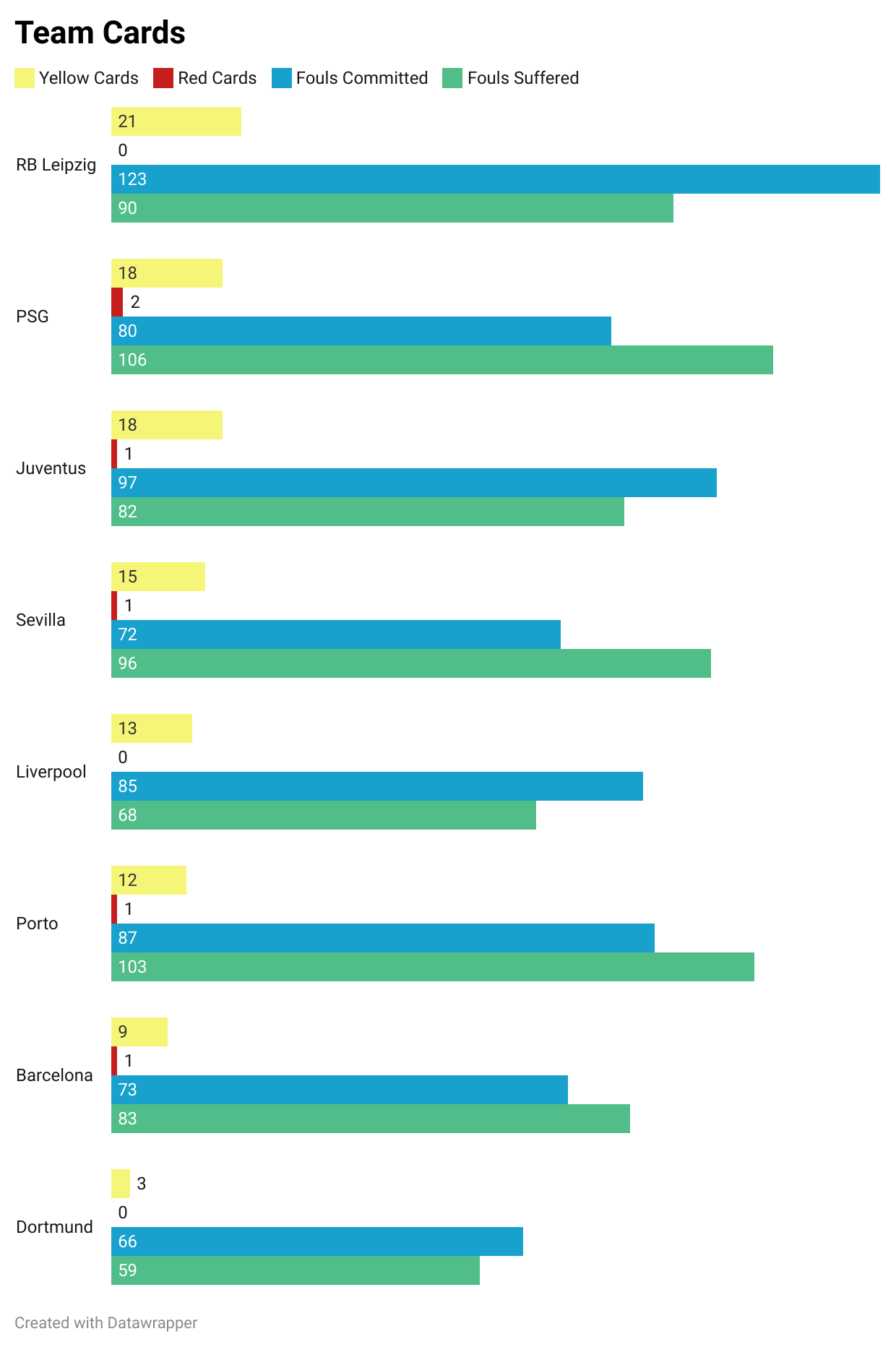 RB Leipzig are out on their own as offenders from this week’s contenders, collecting more cards and committing more fouls than any other team.

Julian Nagelsmann’s aggressive outfit are run close by PSG in the card stakes, though Parisians have committed 34% fewer fouls than their counterparts from the Bundesliga.

The Ligue 1 giants are the most fouled team however, just ahead of Portuguese outsiders FC Porto.

You can read more of our cards and corners predictions here. 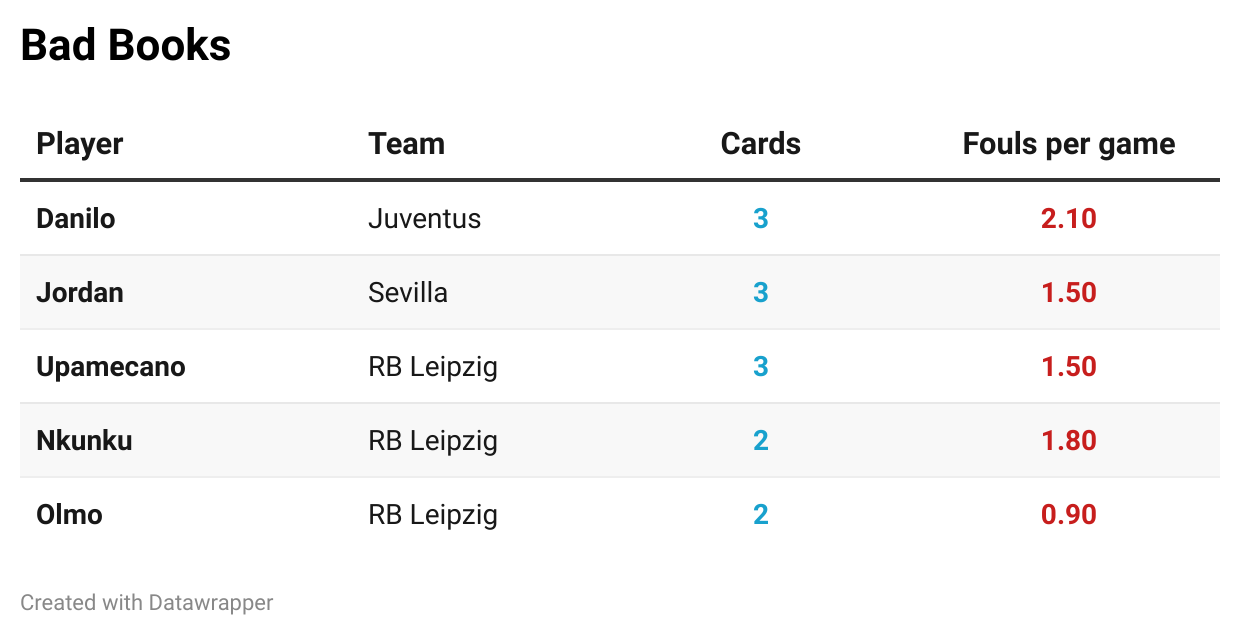 Juventus’ utility man Danilo is statistically the most prevalent fouler among this week’s Champions League’s Last 16 combatants, though his ill-discipline means he will miss out for the Old Lady against his hold club Porto this week through suspension.

Elsewhere, experienced Dutch whistle-blower Bjorn Kuipers has been the picture of leniency this season, reaching into his pocket just twice per Champions League match on average this season. The 47-year-old will officiate Juventus vs Porto on Tuesday evening. 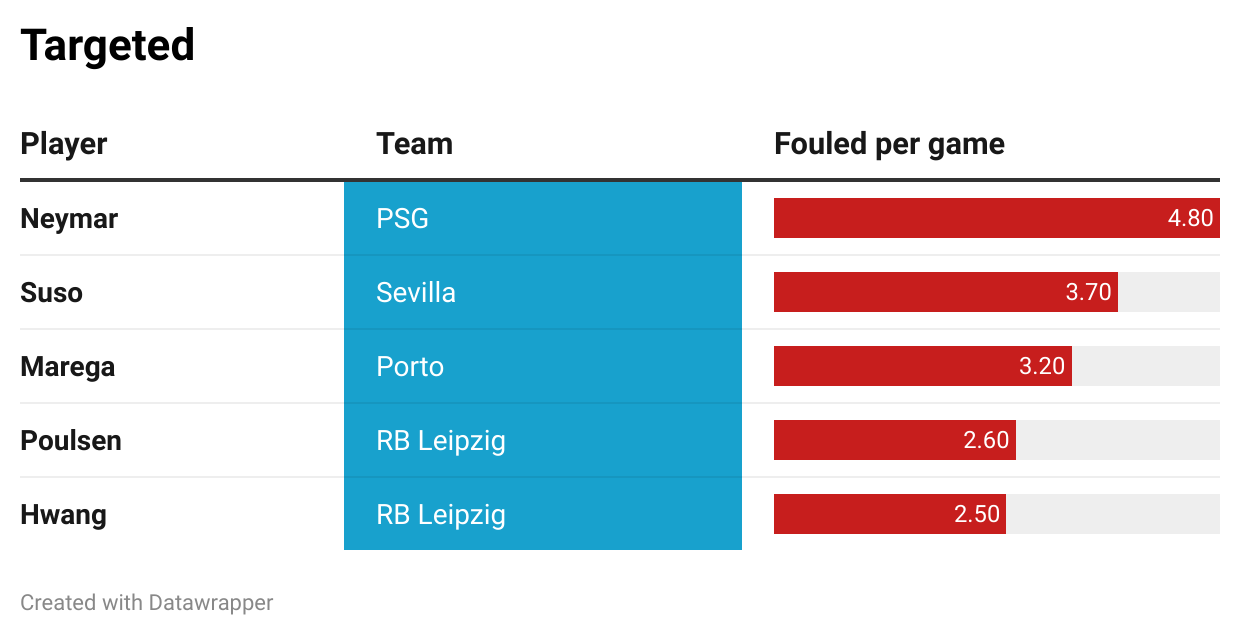 Brazilian superstar Neymar is likely to miss PSG’s clash with his former employers Barcelona on Wednesday, and the attacker’s shins could do with a night off in the tournament. Neymar has been fouled more often per game than any other player left in the competition.

Sevilla winger Suso also has a habit of drawing fouls in the Champions League, and the ex-Liverpool starlet has been fouled 3.7 times per appearance, placing him second on our most targeted players list this week ahead of Porto’s Moussa Marega.

Norwegian sensation Erling Haaland has enjoyed an incredibly prolific campaign for Borussia Dortmund, and his superb Champions League strike rate has placed him in a prime position for a run at the competition’s Golden Boot.

Erling Haaland, Kylian Mbappe and Mohamed Salah were the only players near the top of the charts to score in their Last 16 first-leg appearances last month however.

Lionel Messi’s four-goal haul in the Champions League is relatively modest by his own high standards, though the Argentinean has been trying his best to swell his numbers.

Messi has been averaging a meaty 3.4 shots on target per game on the continent for Barca this season, dwarfing next-best Erling Haaland’s 2.8 accurate attempts per appearance.

Remarkably, Haaland has hit the target with 14 of his 22 efforts overall in the Champions League this season, and his lethal finishing has allowed him find the net once for every 1.75 strikes. 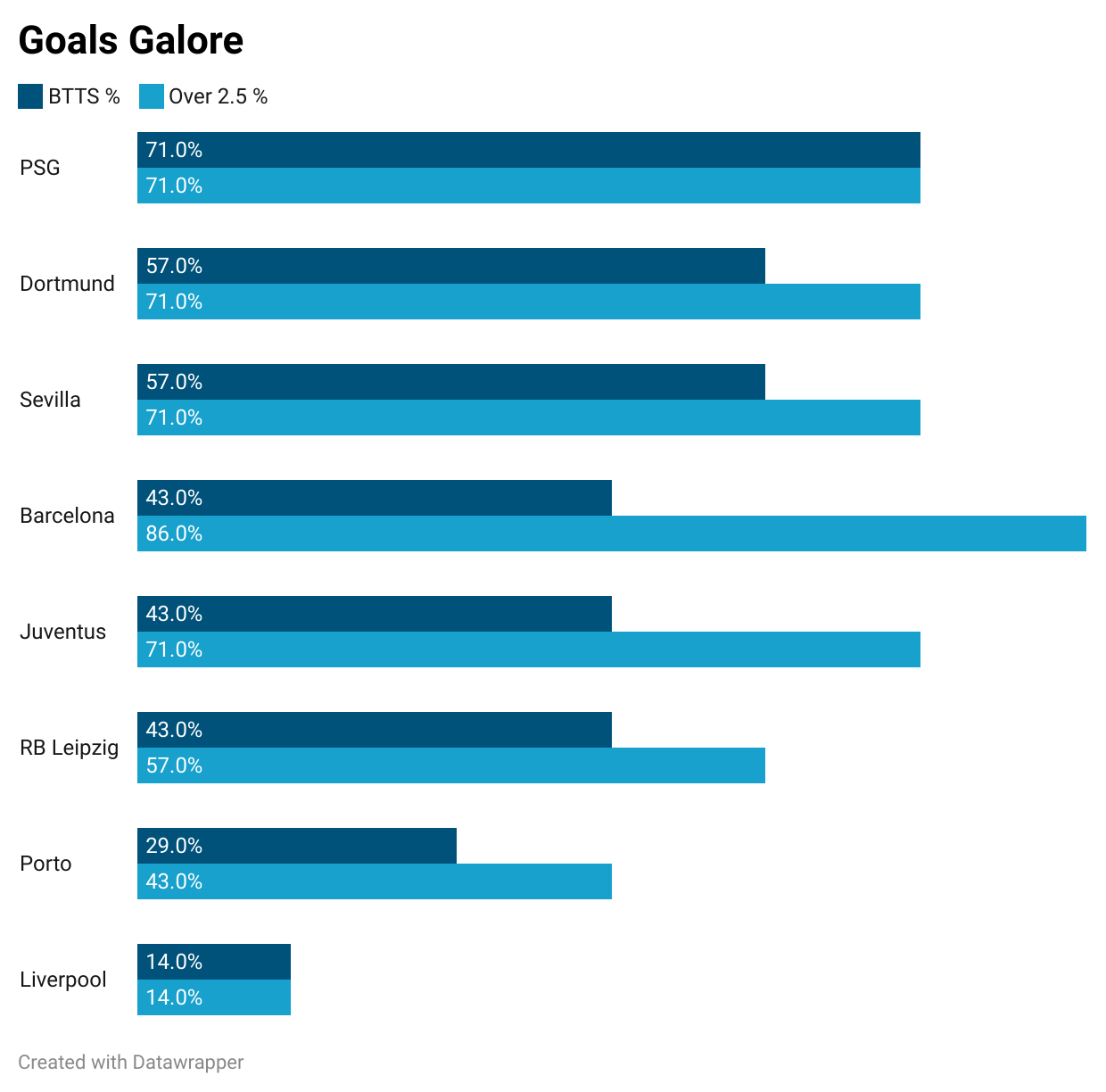 Fans of the over 2.5 and both teams to score markets have regularly been rewarded in games featuring PSG this season, and Champions League fixtures involving the big-spending Parisians have delivered 71% of the time in each of those popular bookmaker offerings.

PSG’s opponents this week, Barcelona, have also been superb value in the entertainment stakes, with 86% of their matches producing over 2.5 goals.

Premier League champions Liverpool find themselves on the opposite end of the scale however, and goalmouth action has been thin on the ground in their continental contests this season. 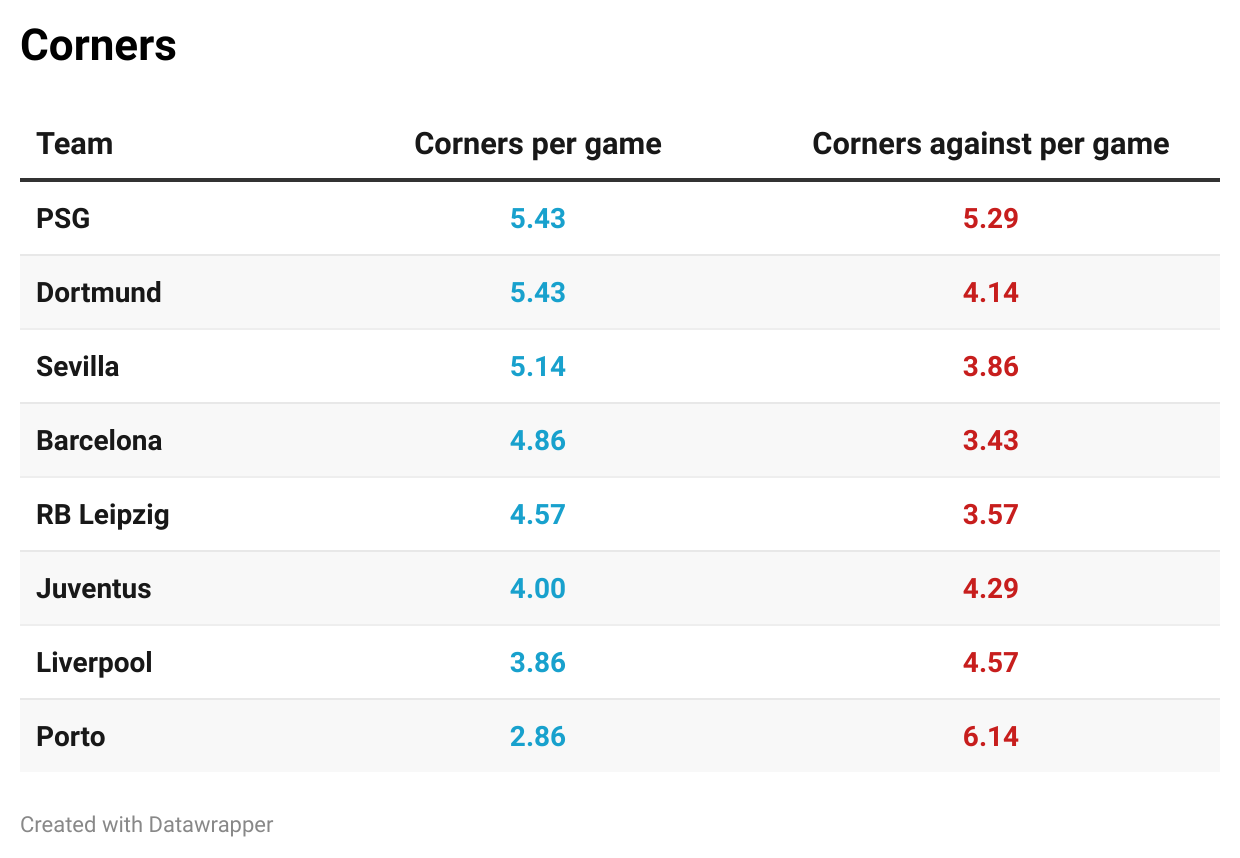 Of this week’s competitors, PSG rank highly for both corners won and corners conceded per Champions League fixture in 2020/21, with only Porto conceding more corners in the competition.

The Parisiens’ games in the competition have averaged 10.72 corners overall per 90 minutes, and it’s interesting to note that matches involving every other team from this week’s Last 16 ties fall below the bookmaker’s favoured 10.0 corner line.

Make sure to check out our Champions League cards and corners predictions for free betting tips from this week’s Last 16 matches.