While England manager Gareth Southgate will, for the large part, have a hard time working out who’s good enough to warrant a seat on the plane to Russia, Germany coach Joachim Löw will be having an entirely different problem – deciding which world class talents he’ll have to leave behind!

From Germany’s 2014 World Cup winning squad, Miroslav Klose, Bastian Schweinsteiger and Philipp Lahm are the most notable retirees, but a few up and coming talents make them look as dangerous as ever ahead of this summer’s competition. Germany were drawn against Mexico, Sweden and South Korea in Group F of the 2018 World Cup, and we’ve taken it upon ourselves to analyse how “die Mannschaft” may line-up on the opening day of the tournament.

Boasting seven World Cup winners and an injection of youth through Bayern Munich’s Joshua Kimmich and RB Leipzig’s Timo Werner, this “best starting XI” is a combination of the players coach Joachim Löw would likely play should all be available. 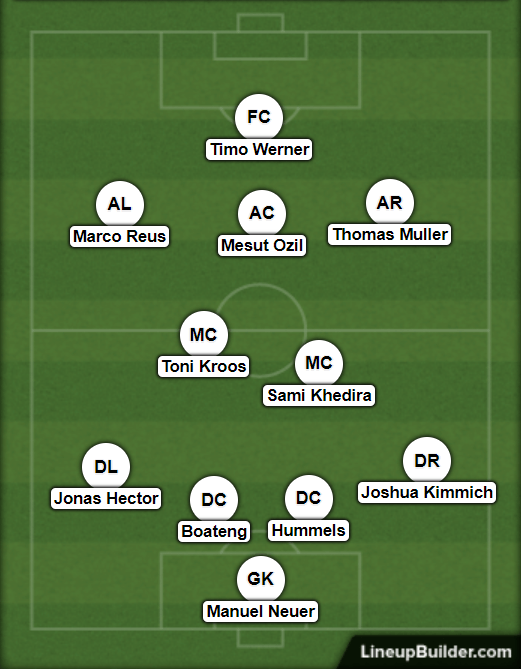 Timo Werner’s remarkable form for RB Leipzig has to make him the first-choice through-and-through striker ahead of the tournament. Both Mario Gomez and Sandro Wagner have also impressed since their respective moves to Stuttgart and Bayern Munich over the winter break, but will likely feature as more experienced back-up options should the pressure get too much for the young German.

In terms of the rest, it goes without saying that Germany have a few options at the ready, with plenty of versatile players in most positions around the pitch. Marco Reus has been finding his feet again at Dortmund since returning from his latest spell sidelined. Joshua Kimmich’s vision, energy and reading of the game make him a “to order” replacement for Philipp Lahm, while Cologne’s Jonas Hector has cemented his spot as a solid left-back since making his debut in 2014.

What about if we exclude long-term injured or more-injury prone players from the German squad for Russia? 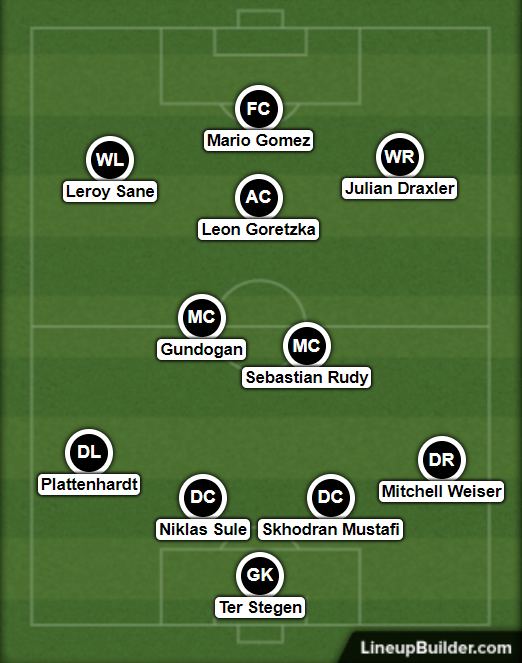 Even if we rule out names like Manuel Neuer, Marco Reus, Mesut Ozil, and Jerome Boateng, Germany still have a rich back up of both attacking and defensive quality. These players are much more representative of the new wave of talent, as well as a few that have had prior international opportunities taken away due to injury, such as Ilkay Gundogan.

Given Reus’ well-documented injury troubles, players like Julian Draxler, who has featured regularly for Ligue 1 winners PSG this season, and Leroy Sane, who has done the same for Premier League winners Manchester City, are very much in contention for the first-choice XI. Mario Gomez, meanwhile, provides more experience up top, with a respectable track record for the national team (31 goals in 71 caps).

Leon Goretzka’s run of form for Schalke in the Bundesliga this season has already been noticed by top dogs Bayern Munich – who he will move to over the summer – and he’s also in contention to push for an attacking midfield spot should any of the “bigger names” not be available. Behind him, Bayern’s Sebastian Rudy is one of many reliable options in midfield and, as he showed in the qualifiers against Northern Ireland, capable of the occasional goal too.

Moving backwards to the defense, given that Niklas Süle continues to impress in Bayern colours, it’s hard to overlook his claims to be the replacement should center-back Jerome Boateng’s injury niggles continue. Barcelona keeper Marc-Andre ter Stegen is already penciled in as Manuel Neuer’s replacement should he also not be ready in time for summer – though Bayern coach Jupp Heynckes thinks he will.

How far will Germany go?

Germany have one of the strongest player pools to choose from heading into the 2018 Russia World Cup. In terms of how they will line up in the opener against Mexico on the 17th June, expect them to be weighted towards the ideal starting XI, with the back-ups filling whichever gaps are left by absentees. Whichever way you look at it though, you have to fancy the Germans to make another deep run. Whether or not the Germans can claim a fifth World Cup title is up for debate, however!

Let us know how far you think Germany will go in the 2018 World Cup on our twitter page.