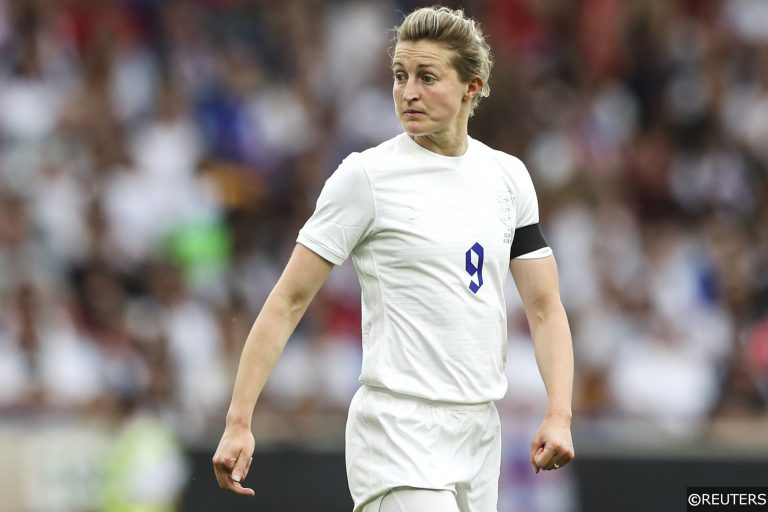 UEFA Women’s Euro 2022 gets underway on Wednesday as host nation England take on Austria in the curtain raiser at Old Trafford in Manchester.

We’ve already covered the game in our Match Predictions and now we’ve put together a huge 75/1 five selection Ultimate Bet Builder tip for the first game of the tournament.

England are heavy favourites to win and to get more value out of backing the Lionesses the handicap markets stand out.  Sarina Wiegman’s team have been in devastating form ahead of the tournament and they thrashed defending champions the Netherlands 5-1 in a warm-up game last month, as well as claiming a 3-0 friendly win over Belgium and a 4-0 success against Switzerland.

Austria have never scored against England in five attempts and have lost all of those games, with four of those defeats coming by three or more goals, so a comfortable win for the hosts appeals.

Ellen White didn’t have a particularly prolific season for club side Manchester City with just four goals in 22 Women’s Super League games but she remains a real threat for England.  White has 47 goals in 74 games for her country and managed 10 goals in just eight World Cup qualifiers.  White is likely to start as the central striker on Wednesday and can add to her Lionesses’ haul against the Austrians.

Bethany England may have to settle for a place on the bench on Wednesday, with White the preferred striker, but if this game follows the pattern we’re expecting she should be introduced early in the second half and is more than capable of grabbing a goal even if her minutes are limited.  England scored as a substitute in the final warm-up game against Switzerland and managed six goals in as many games in World Cup qualifying. The 28-year-old had a good record in the cup competitions for club side Chelsea – hitting four goals in 11 games across three tournaments – and can help fire England to victory on Wednesday.

Lauren Hemp managed 10 assists in 22 games for Man City in the Super League and is likely to be one of England’s key creators at Euro 2022.  Hemp set up two goals in the 5-1 mauling of the Netherlands and can add another assist to her record against the Austrians.

Celina Degen to be shown a card

Austria and Hoffenheim midfielder Celina Degen picked up a yellow card in a friendly defeat to Denmark in the build-up to this tournament and looks a contender for a card on Wednesday.  The 21-year-old has four yellow cards in 20 appearances for her country and has two bookings in her last nine games for club and country.