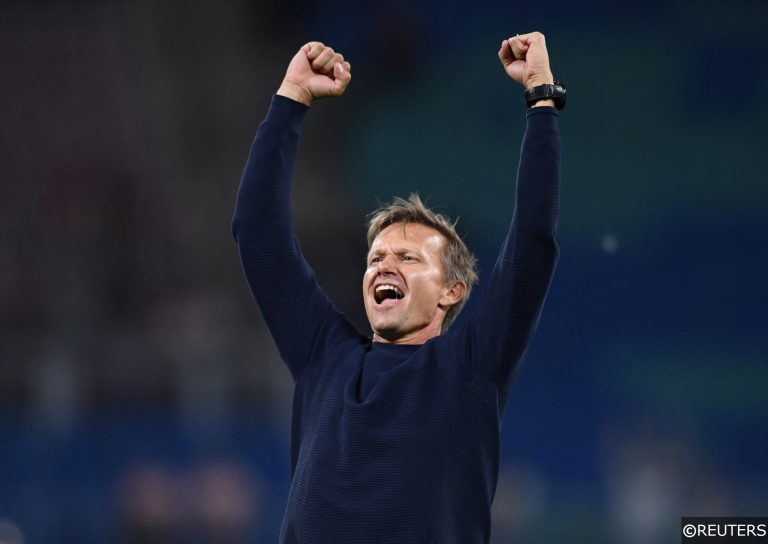 The new Premier League season is just a few weeks away now and fans’ attentions are turning towards the forthcoming campaign.

It goes without saying that our experts are already diving deep into the new term and with that in mind, we asked them who they think will be the ‘winner’ of the Premier League sack race this season.

Writing could be on the wall for Marsch

Jesse Marsch is the frontrunner for me. He saved Leeds from relegation after replacing Marcelo Bielsa but he was by no means a roaring success, winning just four of his 12 games in charge and requiring a final-day win to secure safety.

The Whites have already lost Kalvin Phillips, while Raphinha looks set to be next out of the door. They have brought in a few new faces but it is hard to see them replacing their two most influential players and the fans don’t have the same affinity and patience that they had with Bielsa.

Frank Lampard looks a runner but I’d say Jesse Marsch could be the first to go. Leeds narrowly avoided the drop last season and they could well be under pressure from an early stage this term.

Leeds have spent a fair amount adding to their squad, which could raise expectations, but at the same time they have lost influential midfielder Kalvin Phillips and that could see the Whites struggle. At the prices I’d just favour the American over Lampard.

American Jesse Marsch may have kept Leeds United afloat in the Premier League last season but they only managed four wins in 12 matches under his stewardship and I would not be surprised to see him axed early.

With so many personnel changes over the summer, it would be fair to give Marsch time to work with the new squad.

But losing Kalvin Phillips with Raphinha potentially following the midfielder out the exit door could hit the team hard and the board may hit the panic button if the team go on an early winless streak.

Jesse Marsch was sacked before Christmas by RB Leipzig last season and his Leeds side could easily stumble out of the traps after a significant turnover of players in the summer.

Marsch kept Leeds up last term – just about – but his appointment hardly turned them into world-beaters and the new signings are unlikely to make up for the losses of Kalvin Phillips and, probably, Raphinha.

Aston Villa’s Steven Gerrard could also be worth a small interest at 25-1. Villa got rid of the popular Dean Smith in early November last season and there is increased pressure on Gerrard to deliver after being heavily backed in the transfer market.

Everton finished only four points clear of the Premier League’s relegation zone last term and their summer business so far suggests they may be in store for another season of struggle.

The Toffees were unable to hang onto Richarlison while James Tarkowski, relegated with Burnley last season, has been the only new arrival to Goodison Park thus far.

Many feel Frank Lampard still has plenty to prove as a manager and Everton look in for a tough start as they host Chelsea and Liverpool and travel to Arsenal during their opening seven games. At 7-1, the former England midfielder could be overpriced as this season’s first sacking.

Although Everton survived Premier League relegation last season, there wasn’t a great deal of improvement under Frank Lampard and a slow start to the 2022/23 campaign could spell the end of his time at Goodison Park.

The rest of the summer window will be crucial for the Englishman, who needs to replace last season’s top scorer Richarlison and also add competition for places in several areas of a squad that has average players on high wages.

Everton have shown in recent years that they can be cut-throat if results are not going the right way and Lampard could fall foul of a board that is perhaps setting goals that are still years away from happening.

I can understand why Ralph Hasenhuttl would be among the favourites, given Southampton’s failure to be in any way consistent but the price just be a little short.

Jesse Marsch is under pressure, from the terraces at least, simply because he replaced Marcelo Bielsa and although he just about did what was required to stay up, the less aesthetically-pleasing football will win no friends, if the results aren’t good.

The departures of Kalvin Phillips and Raphinha are big holes to fill and he will need to hit the ground running after a summer of spending to ward off the doubters.

At double digits, Bruno Lage might be worth a punt given Wolves’ goalscoring troubles last season. Only the bottom three scored fewer and he may be shown the door if those issues don’t look like they have been solved.

Scott Parker was given time during Fulham’s last Premier League campaign, but he kept producing well-timed wins to keep the Cottagers in the mix. In their top-flight campaign before that they went through three managers in their fight for survival, so they clearly aren’t afraid to make a change.

There already seems to be tension between Marco Silva and the Fulham hierarchy. Reportedly Silva was promised significant signings this summer which have failed to materialise.

Silva has had three Premier League jobs but none of them have ended well, suffering relegation with Hull, a sour exit at Watford and a spiral at Everton. Things look far from perfect at Craven Cottage, making Silva a good outside candidate for the chop.