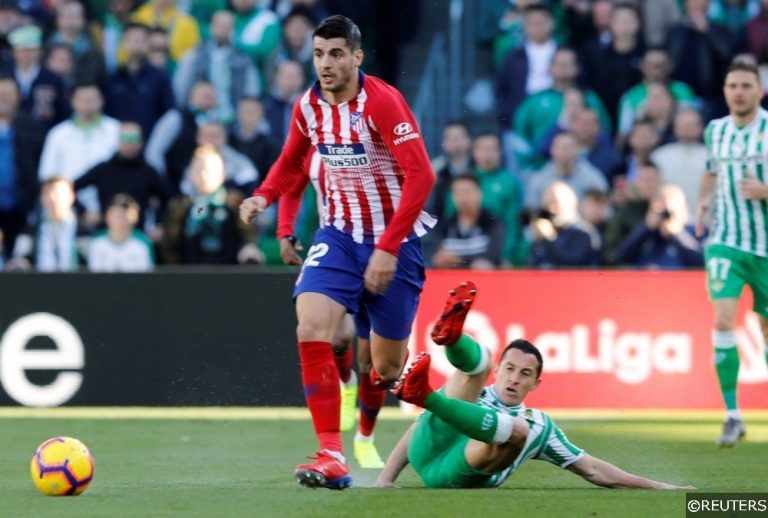 The big games are coming thick and fast in Spain at the moment. This week has already seen Barcelona and Real Madrid meet in El Clasico and just three days later Los Blancos take on Atletico in a Madrid derby this Saturday. It will be only the second to have been staged at the Wanda Metropolitano and after last season’s bore draw, both sides will be hungry to land a decisive derby blow in Atleti’s new home.

Nobody will be more motivated to perform than Alvaro Morata. The 26 year old ultimately failed to carve out a regular starting berth at Real Madrid and 18 months on from his departure, the Spanish striker lines up against his old club for the first time. Not only that, he will do so in the shirt of their city rivals as he makes his home debut for Atleti.

The second clasico of the season took place in midweek as Real Madrid and Barcelona drew 1-1 at Camp Nou in the 1st Leg of their Copa del Rey Semi-Final. It was probably just about a fair result with Los Blancos the better side in the opening half hour, scoring once through Lucas Vazquez and spurning some promising breaks with some poor decision-making in the final third.

In the absence of Ronaldo and Messi, despite the Argentine’s introduction after the break, it was talk of two young Brazilians that dominated much of the reaction to the game, one which Barca grew into. Vinicius again added to his growing reputation at Real Madrid, with the 18 year old seeming completely unfazed by his presence on the biggest stage in world football. He was a bit wasteful at times but is showing all the qualities needed to develop into a genuinely top player.

At the other end though, his compatriot Malcom went some way to winning over the doubters with a composed finish to level the scores at 1-1. It has a been a difficult start to life in Barcelona for the 21 year old, who clearly doesn’t have the full backing of his coach and has his doubters in the stands at Camp Nou. However he took his goal well and was a bigger threat in the game than Philippe Coutinho on the opposite flank, with the former Liverpool man totally out of sorts right now.

Gareth Bale and Marcelo were also in for plenty of flack for their performances in a game that may have finished level but produced some clear winners and losers amongst the players.

Madrid Giants fighting to stay in the Title Race

Who will win the midfield battle in Saturday’s Madrid derby? 👊

The reaction to that game will quickly make way to build up to the Madrid derby this Saturday. Despite only drawing, Barcelona extended their lead at the top of La Liga last weekend to 6 points. That could grow further here with at least one of their nearest rivals guaranteed to drop points. The outcome of the Madrid derby is likely to tell us which of these sides is most likely to stay in the title race.

Atletico are the favourites with the bookies, which is relatively rare. Their overall record in Madrid derbies under Diego Simeone isn’t too bad but they have still found home league wins against their biggest rivals hard to come by. Overall, it’s now just 1 win in 20 years for Atleti at home to Real in La Liga. This will only be the second time the sides have met at the Wanda Metropolitano and fans of Los Rojiblancos are desperate for that particular curse to be left behind at the Vicente Calderon, something which 3 points here would go a long way to achieving.

Morata began his youth career at Atlético Madrid (05-07), before moving to Getafe for the 07-08 season. In 08, he was signed by Real Madrid, spending 3 years in the reserve side. In Dec ‘10, under Jose Mourinho, he made his 1st team debut. pic.twitter.com/Z72CToHETc

Much of the build-up to this game will surround Alvaro Morata. He is from Madrid and was on Atleti’s books as a youngster but ultimately signed for Real Madrid as a 16 year old and the formative years of his professional career were spent at the Bernabeu. Morata felt as though he had done enough to warrant a more extended chance in the first team at Real, particularly when he scored 15 goals in La Liga in the 2016/17 season despite being effectively a back-up player.

His departure for Chelsea that summer was pretty acrimonious, so he will be hungry to prove a point to his former employers here and the nature of his exit in part explains his willingness to jump ship and join Atleti. However he hasn’t exactly been welcomed with the most open of arms by fans of Los Rojiblancos. Sections of the Atleti crowd were chanting for the club not to sign him as recently as their last home game against Getafe a fortnight ago.

The board didn’t listen and Morata’s debut saw him put in an ineffective display as Atleti suffered their first defeat in 19 league matches at Real Betis so it’s not just to Real Madrid, who Morata will be aiming to prove a point this Saturday. It will be fascinating to watch his reaction were he to score in this match while his duel with former teammate Sergio Ramos will also be something to look out for.

Is Morata the solution to Atleti’s Problem Position?

There was a time when Atletico Madrid was like a production line for top quality strikers. Fernando Torres and Sergio Aguero both forged reputations in Atleti colours while Diego Forlan enjoyed the best years of his career there, finishing as the top scorer in La Liga for the second time a decade ago. Throw into the mix Falcao and Diego Costa and they’ve had some fantastic strike-forces down the years but in recent seasons, the one thing Diego Simeone has struggled to do, is find a suitable partner for Antoine Griezmann.

Not since Costa in the 2013-14 title-winning season has there been an outright success with the likes of Jackson Martinez, Kevin Gameiro and this season Nikola Kalinic not to mention the returning Costa, failing to deliver. Diego Simeone has long been an admirer of Morata and believes he is the man to get the best out of him.

However there are still many who question whether Morata is the right man for Atleti. His 18 months in England with Chelsea were ultimately disappointing and he at times looks like a player that has lost all belief in himself. Atleti aren’t a team that creates bucket loads of chances so he will need to be more clinical whilst working hard to become the imposing striker that Atleti crave.

His physique is well suited to that but there have also been doubts about Morata’s mental strength with suggestions he is perhaps not nasty enough for the role. He has again been signed, in theory at least, as a successor to Diego Costa, something which didn’t exactly work out well at Stamford Bridge. Simeone clearly thinks he is the man to get Morata playing with a fire in his belly, but it will be a test of his considerable man-management abilities, if Morata is to prove a success in the red and white half of Madrid.