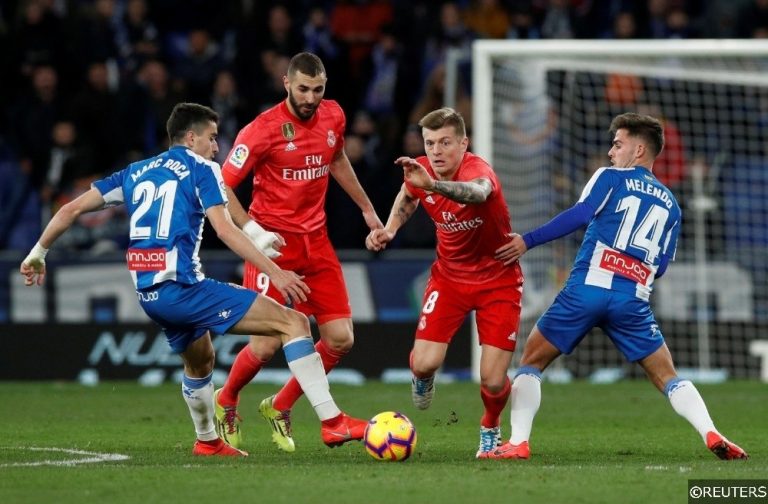 It was a good weekend for the sides at the right end of La Liga. The top four were all victorious with few major alarms. Atletico Madrid’s 2-0 win over high-flying Getafe on Saturday further suggested that they are capable of taking the fight to Barcelona in the title race. However the Catalans ensured their advantage would stay at 5 points with a 2-0 win at Girona the following day, despite a few nervy moments.

Elsewhere the likes of Valencia and Athletic Bilbao continued their recent upturns with significant wins that suggest both could yet challenge for European qualification. Athletic in particular have really turned things around with the Basque giants looking like they could have been in relegation trouble when they sacked Eduardo Berizzo earlier in the season.

Here were some of the main stories from match-day 21 in La Liga:

This is probably benz best performance in 2 or 3 years what a delight to watch magical benz performance 🙌🏻👑❤️🙏😀😍⚽️👌🔥🇩🇿 @Benzema #HalaMadrid #Vamos #BigBenz pic.twitter.com/GKaBKS0M4o

Real Madrid are making a habit of starting to come good, just in time for the resumption of the Champions League in February. There are now real signs that is happening again this term with key players like Luka Modric and Karim Benzema hitting form. The duo combined for Real’s first goal at Espanyol on Sunday night with a surging run from the Croatian leading to a simple finish for Benzema after just 3 minutes.

The visitors were in total control for much of the opening period and doubled their lead soon afterwards with Sergio Ramos heading in for his 13th goal of the season for club and country. Léo Baptistão grabbed one back for the hosts but Benzema was the real star of the show, with the Frenchman widely perceived to have been Real’s best player this term.

The one thing that had been lacking was goals but he doubled his tally for the night with a brilliant finish on the stroke of Half-Time. Real Madrid’s night got even better when Gareth Bale returned to action in the 2nd Half and scored within minutes of his introduction. A late red card for Raphael Varane and an injury to Sergio Ramos were the only downers on an otherwise excellent evening for Los Blancos. While the league title may be beyond them, if they can start to perform like this on a more consistent basis, another strong Champions League challenge is certainly possible.

Espanyol meanwhile are now starting to look like they could really get sucked into the relegation battle. That was their 9th defeat in 10 league games to pile the pressure on Rubi. They have a Copa del Rey Quarter-Final 2nd Leg to come this week but their league season is falling apart after a bright start to the campaign.

Valencia returning to Form with another Win

One of the standout fixtures this weekend was in the Valencian community where Villarreal made the short trip to the Mestalla. It would prove to be an afternoon to forget for fans of the Yellow Submarine though as Los Che cruised to a 3-0 win with Rodrigo again on the scoresheet.

That would have delighted Marcelino as much as anything. Rodrigo scored 16 times in La Liga last term, earning him a trip to the World Cup. However with just 2 goals in the first half of this season, his failure to convert just about summed up the struggles of his team, until recently the lowest scorers in the division. Having also scored the winner in Vigo last weekend, Rodrigo appears to be finding form again and if he can maintain it, his resurgence could help to completely transform Valencia’s season. Defensively they’ve been relatively solid while there is plenty of quality in midfield. The only thing lacking has been the killer instinct in the final third with summer signings Kevin Gameiro and Michy Batshuayi both failing to impress.

Valencia now have reason for optimism and find themselves just a place outside the European positions and with hopes of turning around their Copa del Rey Quarter-Final against Getafe this coming week. Marcelino may have to play something of a balancing act in terms of squad rotation though. Valencia will be one of the favourites to win the Europa League which resumes next month and that would involve an extra 9 games on top of their other commitments, were they to reach the Final.

Keko: ”The supporters treat us like this because they know we are warriors”#pucela #RealValladolidCelt pic.twitter.com/iksYLNionN

These though are worrying times for Villarreal. They’d won on each of their previous 3 trips to the Mestalla but none of those games were quite as crucial as this latest one. Defeat leaves them 2nd bottom and with just 1 victory in 15 league games. They are yet to claim maximum points under recently appointed Luis Garcia. On paper they have more than enough quality to turn this around but the more this poor form continues, the more they will be fearing a repeat of the 2012-13 season. That Villarreal side had competed in that season’s Champions League and was labelled ‘too good to go down’ but was ultimately relegated on a dramatic final day of the season.

Having only got the job in December, Garcia may get a bit more time to turn it around but it’s doubtful the same luxury will be afforded to Miguel Cardoso, who is only one more month into his stint as Celta Vigo boss. The Galicians were beaten 2-1 in a crunch basement battle at Real Valladolid this weekend. It was a desperate result for Celta, compounded when new signing Wesley Hoedt was sent off on his debut having moved from Southampton this month.

Celta will fall into the relegation zone, if Rayo Vallecano can win their game at Alaves on Monday night. Either way Cardoso may be running out of time with Celta having suffered 5 straight league defeats, 3 of which were against direct rivals at the bottom end of the division. Defensively they’ve been hopeless under the Portuguese boss while the absence of Iago Aspas has been a bitter blow up top. They could be faced with another hole in attack with transfer reports suggesting West Ham are willing to pay the £43.5 million release fee on striker Maxi Gomez’s contract. That would be a huge cash influx but with the window set to slam shut this week, they’d have precious little time to line up a replacement.