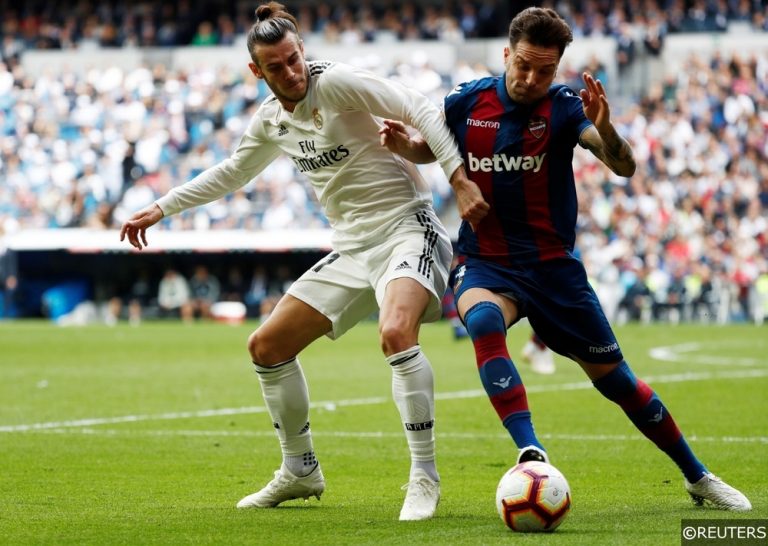 We are now 15 games into the new season in La Liga and Real Madrid’s inability to score goals remains a source of concern for fans of Los Blancos. They average just 1.57 goals per game in La Liga. If that was to continue across the whole season it would see them end up with just 60 goals in total. To put things in some perspective, even during what was a dreadful domestic campaign last time around, they still managed to score 94 goals, some 28 more than the third highest scorers and only 5 fewer than champions Barcelona. Real had managed to score 100 or more in each of the previous 8 seasons so it has been an extraordinary drop-off this term, even allowing for the likely decline that the departure of Cristiano Ronaldo would bring.

Los Blancos are not only currently being comfortably outscored by Barcelona but also by Sevilla, Celta Vigo and most surprisingly of all Levante, who have netted 4 more league goals so far this season than Los Blancos. While Gareth Bale did finally end a 99 day goal drought in the Spanish top flight at Huesca last weekend, they still looked short on ideas and inspiration against the division’s bottom club and suffered their third 3-0 defeat of the campaign already in midweek against CSKA in the Champions League.

Despite their own struggles, Barca are still by some distance the top scorers in La Liga 2018/19 with an average of 2.73 goals per game. These are other three teams that are currently outfiring Real Madrid:

While Celta Vigo have made a mixed start to the season overall and have already sacked summer appointment Antonio Mohamed, the strike partnership of Iago Aspas and Maxi Gomez has continued to fire in the goals and they boast La Liga’s 2nd best goalscoring record behind Barcelona.

Between them, they netted 39 goals in La Liga last term as Maxi Gomez enjoyed an impressive debut season in the Spanish top flight. He’s already proved to be no one-season wonder with 8 league goals already this. The Uruguayan is far more than just a scorer of goals and his impressive hold-up play and aerial qualities are attracting plenty of admirers. With Diego Costa struggling on his return to Atletico Madrid, there have been strong murmurings linking Gomez with a move to the Wanda Metropolitano and Celta would be sure to make a huge profit on the fee of around £4 million they paid Defensor Sporting last year, were the 22 year old to move on either in January or at the end of the season.

Strike-partner Iago Aspas meanwhile has 10 league goals this term, a record only Leo Messi and Cristhian Stuani can better. Aspas has scored 51 goals in La Liga since the start of the 2016/17 season, by far the best record of any Spanish player in the Primera Division. He is a bit of a curious case in that he has largely failed when he has moved elsewhere with difficult spells in both Liverpool and Seville, not ones he will look back on fondly. He is clearly happiest at his hometown club and his record is so good, that Aspas is now surely due to an extended run in the Spanish national side with La Roja’s other strikers continuing to misfire.

Celta are next in action this Friday when they play host to Leganes at Balaidos.

Who else would it be for Sevilla? Pablo Sarabia is always one step ahead of the game.

It was never likely to be dull at the Ramon Sanchez Pizjuan this season with attack-minded Girona boss Pablo Machin taking over. Under his stewardship, Sevilla have both entertained and largely got the desired results. They’ve already scored a huge 61 goals in all competitions this term. That’s in some part thanks to few thrashings they’ve handed out to relatively weak Europa League opponents but they’ve been firing in the goals in La Liga too, with a 3-0 win over Real Madrid the highlight of their season to date.

Like Celta Vigo, they’ve managed to find an effective strike pairing in the shape of Wissam Ben Yedder and Andre Silva. The latter managed just two goals in a difficult season in Serie A last term but the Portuguese international has already scored 8 times in La Liga, one more than his strike partner with the duo contributing 56% of their team’s goals.

They have had help from other areas though, most notably Pablo Sarabia. Mostly used as a winger in previous seasons, Sarabia has flourished in the number 10 role under Machin, playing behind the front two. He has developed a real habit for arriving in the box and getting on the end of things. The 26 year old has 13 goals in all competitions this term and is starting to really make a case for an international call-up as Luis Enrique looks to revitalise the Spanish national team.

Levante’s Jose Luis Morales is another man who is knocking on the door as far as an international chance is concerned. The fact he is playing for unfashionable Levante is perhaps the main reason for his exclusion as his performances over the last 12 months or so in La Liga have been exceptional. Used either as a winger or a striker, Morales’ pace and dribbling ability has caused big problems for defences and he has scored some fine solo goals with his opening day strike at Betis this term a particular highlight.

The Valencia club host Barcelona this weekend, a fixture they won 5-4 last term. They also come into this one following a 4-4 draw at Eibar last weekend. Defensively they are vulnerable at times and they often sit very deep, particularly on the road. However that hasn’t stopped them scoring a hatful of goals and when they break, they do so in numbers and invariably with real purpose.

Levante’s excellent start to the season is only really a continuation of their great escape under Paco Lopez at the end of last term and despite a few heavy defeats, most notably a 6-2 home loss to Sevilla, the Valencia club continue to surprise with an away win at the Bernabeu the highlight of their season to date.