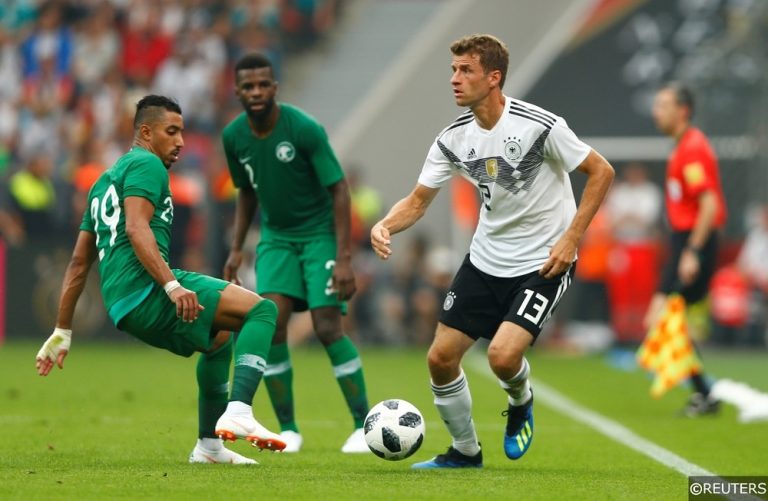 Germany wrapped up their 2018 World Cup preparations with two friendlies away to Austria and at home to Saudi Arabia. “Die Mannschaft” were aiming to iron out a few creases before setting off to Russia, having not won a match since their last World Cup qualifier against Azerbaijan back in in October 2017. Joachim Löw has put most of his 23-man squad to the test over the past two weeks, but how ready are the reigning champions for their tournament opener against Mexico on Sunday?

As second favourites going into the tournament, Joachim Löw’s side are naturally expected to make a deep run – in fact, the Germans have got to at least the Quarter Finals in every World Cup since 1982. And despite losing the likes of captain Philipp Lahm, record goalscorer Miroslav Klose and veterans Bastian Schweinsteiger and Lukas Podolski since their 2014 World Cup triumph, forward Thomas Müller claims that they’re “better equipped now than then”. Is he right?

Free Super Tips analyses Germany’s position ahead of the 2018 World Cup in Russia.

Heavy rain threatened to see Germany’s preparations in Austria cut short, but the two sides were fortunately able to kick off at the Wörthersee Stadion after a 100 minute delay. Löw took this friendly as a chance to test the fringe players from his preliminary 27-man squad, looking to see who was worthy of a spot on the plane to Russia. Freiburg striker Nils Petersen was handed his international debut, while Manuel Neuer made his first start since September 2017 after recovering from a broken foot.

Germany had no trouble adapting to the conditions and found themselves ahead after just 11 minutes. A poor clearance from Austria goalkeeper Jörg Siebenhandl landed straight at the feet of Mesut Özil on the right hand side, and he took no time in returning it into the net with a delicate finish to the far post – something that will no doubt make Löw’s decision on playing him even more difficult after Özil’s recent political controversy.

After this, Germany looked largely on the back foot, with a few saves from Manuel Neuer seeing them survive through to half-time with the 1-0 lead intact. Austria kept up the pressure at the start of the second half and deservedly drew level as Martin Hinteregger showed superb technique to find the side netting from David Alaba’s whipped corner – it’s fair to say Neuer couldn’t have done much about that one! Not long after, Alessandro Schöpf put the Austrians 2-1 ahead, with Neuer not having much chance of stopping that one either.

Germany struggled to create anything of note in reply for the rest of the match. While their starting XI against Mexico should look a lot different, their inability to pose an attacking threat should leave Joachim Löw and his staff scratching their heads. Following the game, Löw announced the players that would not be present in his 23 man squad – goalkeeper Bernd Leno, defender Jonathan Tah, forward Nils Petersen, and to much controversy, Manchester City’s Leroy Sane.

Read More: Why was Leroy Sane left out of Germany’s squad?

Löw named a much stronger starting 11 in their second pre-World Cup friendly against Saudi Arabia, likely hoping to raise spirits and bring out an improved performance following the disappointing defeat to Austria. As many as seven changes were made, with Marco Reus and Julian Draxler being the most notable players to be given the chance to impress. Thomas Müller took on his regular role on the right hand side, with RB Leipzig forward Werner leading the attack.

Once again, Germany came out strong and opened the scoring within eight minutes. A stunning long range pass from Joshua Kimmich found Marco Reus’ run into the left side of the penalty area, which he cut back for Timo Werner, who smashed it in first time off the underside of the crossbar. “Die Mannschaft” were in full flow following that and were denied three times – once by the woodwork and twice by offside decisions – between then and the dying minutes of the first half.

Germany finally got their second just two minutes before half-time as Saudi Arabia defender Hawsawi turned a cross from Werner into his own net. Coming out into the second half, Löw made a few changes, one of which was the replacement of Manuel Neuer with Marc-Andre ter Stegen. Even with limited game time ahead of the tournament, Löw has stated that Neuer will be Germany’s first choice goalkeeper in Russia – and who would blame him?!

Ter Stegen had very little to do in the second half until Saudi Arabia were awarded a penalty with six minutes left. He managed to save Mohammad Al-Sahlawi’s poor spot-kick, but Saudi midfielder Al-Jassim was alert enough to knock in the rebound and wipe out a potential German clean sheet. “Die Mannschaft” managed to see the game out with a 2-1 win despite another late penalty appeal from Saudi Arabia.

How prepared are Germany for the World Cup?

A largely underwhelming warm-up campaign for the Germans leaves lots of questions unanswered. A convincing 2-1 win over Saudi Arabia did bring an end to run of five matches without a victory – their worst run of form since 1988 – but it doesn’t exactly paint a perfect picture. The Saudis are much weaker opponents than Germany will face in Group F – Mexico, Sweden and South Korea – and their defeat against the in-form Austrians in their first friendly showed an inability to pose an attacking threat against tougher opponents.

Joachim Löw will no doubt be spending every minute between now and Sunday picking apart and analysing his side’s performances, but a few off-field issues could mean he has to make a few unexpected changes to his usual starting 11 against Mexico. Arsenal midfielder Mesut Özil sat out the match against Saudi Arabia as a precaution for his left knee injury, while both he and Ilkay Gündogan have come under heavy fire from the German media for their open support of Turkish president Erdogan. Either of these factors could negatively impact relationships within the team and consequently Germany’s performances on the whole.

However, with the quality that Germany have in reserve, it’s tough to see them crashing out as a consequence as some teams would. Should Özil not be available for the opening fixture, expect Löw to stick with Draxler, Reus and Müller as his three attacking midfield options. At the end of the day, Germany are well-known for being a tournament team, so you can’t take away too much from their shaky World Cup preparations. And as Thomas Müller put it, “If you look at the squad, we have two first-team players for almost every position, so things are looking very positive”.

Read More: Can anyone trouble Germany in Group F?

Let us know how far you think Germany will go at the 2018 World Cup over on our Twitter page.