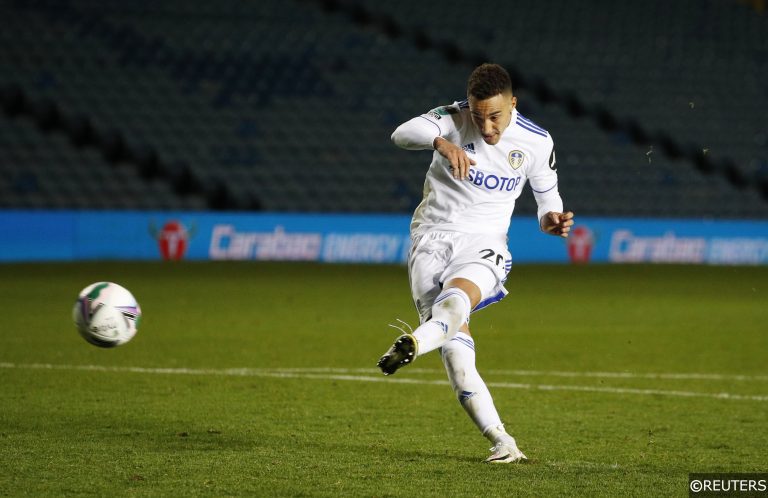 Monday night’s clash between Leeds and Liverpool is a real test of the Reds’ Champions League ambitions. Marcelo Bielsa’s side landed a huge win at Man City last weekend, so they should be high on confidence ahead of this showdown with the champions.

Ahead of the game, we’ve picked out the best same-game multi options for the encounter at Elland Road. We’ve got five selections for Monday’s match, which combined clock in at 76/1. You can see that bet builder tip and our five picks below.

For more in-depth match previews, take a look at our football predictions section.

Liverpool have won only six of their last 17 Premier League matches and they should be worried about Leeds coming into this one. Bielsa’s side have won their last three, while they’ve managed to stop Chelsea and City in a four-game unbeaten run.

Meanwhile, Liverpool have dropped points in their last four league games following Champions League action. If they’ve been stretched in other clashes, then don’t expect them to match the energy of this Leeds side.

Leeds have been a thrilling addition to the Premier League, scoring and conceding 49 times in their 31 games in the top flight this term. They’ve won their last three games 2-1, while we expect them to take advantage of a Liverpool side who have defensive vulnerabilities.

The Reds have scored 1.93 goals per away game this term, but they continue to be stretched at the back. Their centre-half replacements don’t look adept at dealing with the kind of threat Leeds pose, so we’re backing goals in this clash.

Stuart Dallas scored a memorable brace in Leeds’ win at City and the Northern Irishman is revelling in his central midfield role. With Kalvin Phillips sitting deep and Tyler Roberts ahead of him pushing on, there’s plenty of space for Dallas to roam in.

While playing in central midfield Dallas averages 1.5 shots per game and he’s a good price to test the keeper with an effort against the Reds.

Phillips has been booked in eight of his 24 matches for Leeds this term. He’s picked up seven yellows in the Premier League this term, making over a foul per game on average.

Phillips will be hard-pressed to track Liverpool’s midfield runners along with their forwards dropping deep, so we see him getting his name in the referee’s book on Monday.

Leeds have averaged six corners per game at Elland Road this season. The hosts have recorded at least five corners in five of their last six games, only failing to hit that target playing with 10 men at Man City.

Liverpool have struggled defensively of late and we can see them shipping a few corners to a Leeds side who will see plenty of the ball.