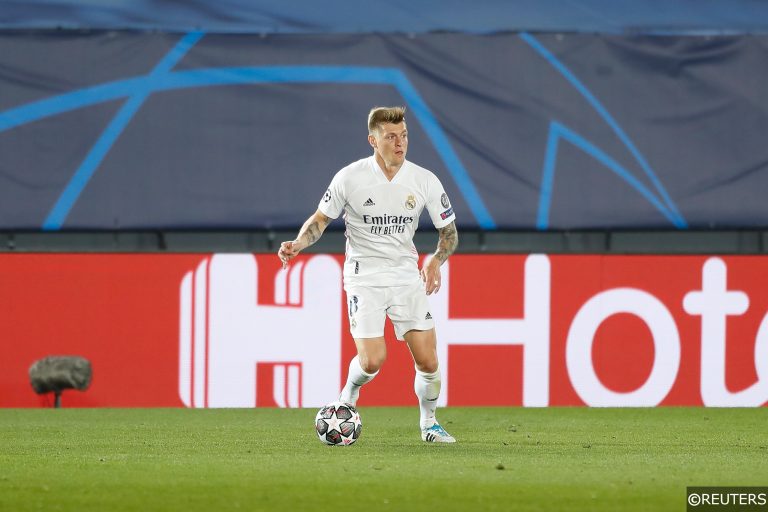 The cream is rising to the top in the Champions League and with the competition’s climax in sight, we learned the identity of this season’s four semi-finalists in midweek.

Paris St. Germain, led by Mauricio Pochettino, booked their place in the tournament’s penultimate round with a double-legged victory over defending champions Bayern Munich, where the French giants will lock horns with title favourites Manchester City.

Record 13-times winners Real Madrid set-up a semi-final skirmish with Chelsea thanks to their triumph over two games against the Blues’ Premier League counterparts Liverpool, in what looks another mouth-watering continental contest.

Many of the game’s biggest superstars will compete in the Champions League semi-finals later this month, and to whet your appetite for what promises to be a feast of high-calibre action, we’ve put together a Best XI from the tournament’s remaining sides.

If you disagree with any of our selections, make sure to tweet us @footysupertips to have your say – and remember – we’ll be covering all of the quarter-final developments in detail over on our Champions League predictions page. 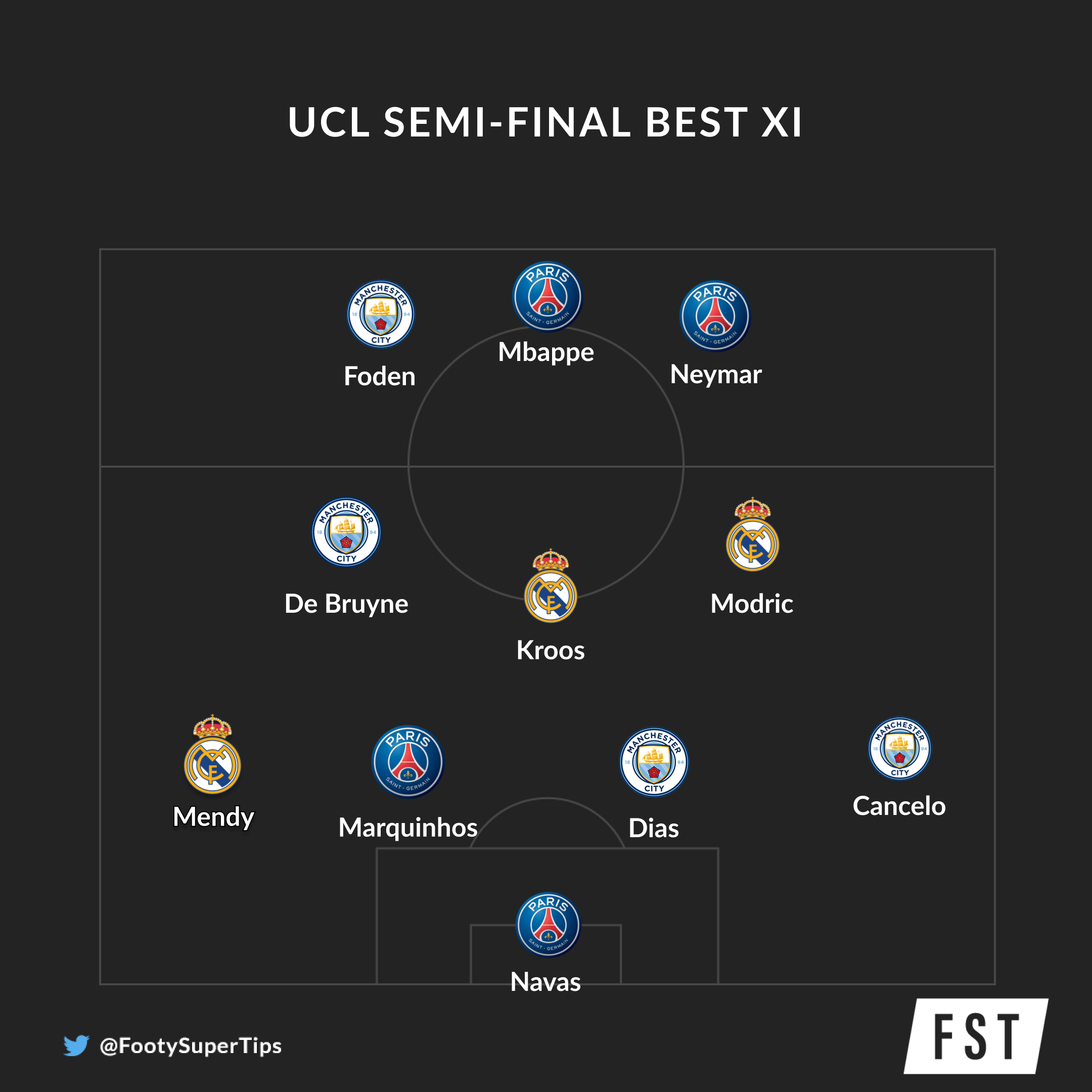 Keylor Navas rarely receives the plaudits he deserves, though the Costa Rican stopper is among Europe’s most reliable goalkeepers. Incredibly, Navas has never lost a two-legged Champions League tie in which he has played, and the 34-year-old proved his worth again in the competition’s quarter-finals when he made a stunning 14 saves over two legs to help PSG knock Bayern Munich out.

Remarkably, Manchester City have conceded just three goals in ten Champions League fixtures this season, two of which were shipped in the last round against Borussia Dortmund – so the appearance of two of their defenders in our back four should come as no surprise.

Portuguese fullback Joao Cancelo has fast become one of City’s most influential figures in 2020/21 following a rocky first campaign with the Citizens, while his compatriot Ruben Dias has proved a keystone addition to Pep Guardiola’s defence since his big move from Benfica last summer.

Unflappable Brazilian Marquinhos meanwhile, has been a defensive tour de force for PSG, and the 26-year-old’s knack for notching crucial goals again proved pivotal in the Parisians’ 3-2 win over Bayern in the quarter-final first-leg in Munich.

At left-back, we’ve opted to include French flier and Real Madrid regular Ferland Mendy. The 25-year-old has been an ever-present for Los Blancos in this season’s Champions League and the combination of silk and steel he wields down the flank has been invaluable. 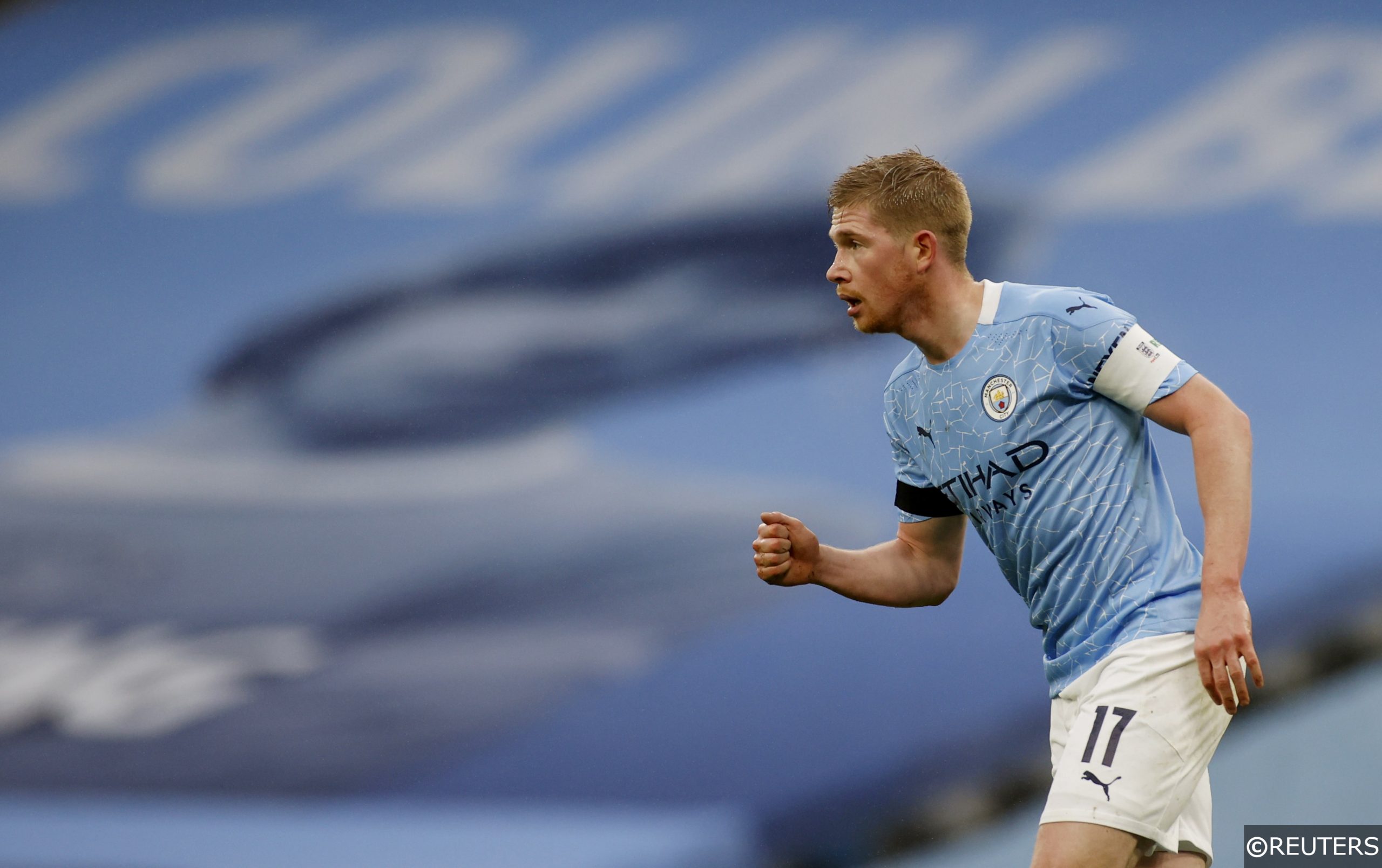 Kevin de Bruyne was always going to be the first point of call during any conversation about the Champions League’s best midfielders, and the Belgian’s ability to whisper passes through the lines makes him a must have for any combined XI.

The 29-year-old has provided six goal contributions in just five continental starts for Man City this term, and the sandy-haired schemer is joined in our midfield by Real Madrid pair Toni Kroos and Luka Modric.

Rarely has football seen such a potent example of sporting symbiosis, and Modric and Kroos’ midfield mastery can often be other worldly. The duo – who are both in their 30’s – have appeared in every one of Real’s UCL fixtures in 2020/21.

Phil Foden has been gliding across European pitches like an ethereal mist conjured up by Pep Guardiola this season. Permanently haunting the peripheral vision of defenders, Foden has been materialising in pockets of space to devastating effect for the Citizens.

The 20-year-old notched in both legs of City’s wins against Borussia Dortmund in the quarter-finals, and the England man has the skill to make history for the Manchester giants before the summer.

PSG attackers Neymar and Kylian Mbappe just ooze star quality, though the global icons have shown they have substance to go along with style this season.

With 14 Champions League goals between them, Neymar and Mbappe have been dancing and flicking their way past embarrassed defenders with starling regularity, and with both match-winners on form, PSG will believe they can land club football’s biggest prize.