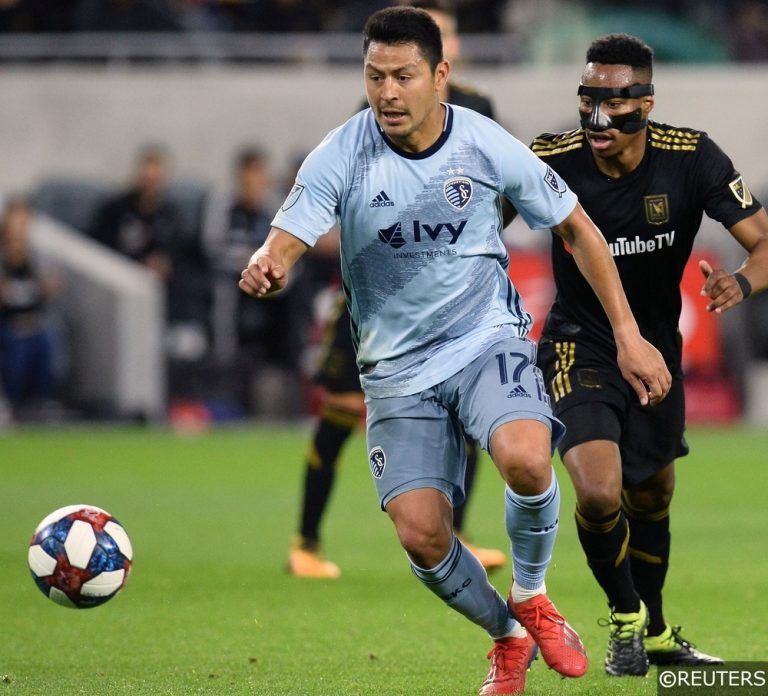 There are seven fixtures in MLS in the early hours of Sunday morning and we’ve got a selection for each game as well as a 35/1 four-fold accumulator.

The most interesting games appear to be in the Western Conference, with leaders Sporting Kansas City facing a tough trip to Colorado Rapids and Portland Timbers taking on Real Salt Lake in a key fixture in the battle for a playoff place.

Columbus Crew to win at 17/20 – ⭐⭐⭐
Defending champions Columbus Crew are having a poor season by their standards and at the moment they are clinging on to the final playoff spot in the Eastern Conference.

The Crew have lost their last two games but the visit of Atlanta looks like a good opportunity to get back to winning ways.  The visitors have gone 12 games without a win and haven’t managed a victory on the road all season.

Atlanta have managed six draws in 10 away games, losing the other four, but Columbus have managed four wins in eight home games, drawing three and losing just one, and we feel they should be able to pick up maximum points here.

Minnesota to win at 4/7 – ⭐⭐⭐
Minnesota United are one of the form teams in the MLS and we expect them to continue their rise up the Western Conference standings when Houston Dynamo visit this weekend.

The Loons have just one defeat in their last 12 games (W6, D5) and at their Allianz Field base they have been particularly impressive with five wins and one draw in their last six games.

Houston are winless in their last 10 and are yet to register a win on the road after 10 attempts this term (D5, L5) and we’re expecting them to leave Minnesota with nothing.

FC Dallas are unbeaten at home after eight games this season ahead of the visit of Austin.

The hosts have found wins hard to come by though, with just three victories at the Toyota Stadium and five draws.

Austin have struggled on the road of late and are winless in their last six away games, with four defeats and two draws, and we feel this match-up looks like a good opportunity for Dallas to get another win on the board.

The Toros do appear to have found a way to turn those draws into wins in Dallas recently as they have two wins in their last three at home, including a 4-0 thrashing of Los Angeles Galaxy, and we expect them to come out on top in this match-up.

Sporting Kansas City enter the latest round of fixtures as the Western Conference pacesetters but they will face a real test at an in-form Colorado outfit.

The Rapids have just one defeat in their last six games and at home they have five wins and two draws since losing their first outing of the campaign at their Dick’s Sporting Goods Park base.

However, SKC have been flying on their travels, with three wins in their last three games – and all of those wins came against teams in the top five in the Western Conference.

We feel Sporting Kansas can complete the set by winning at fourth-placed Colorado this weekend but the Rapids will make a game of it and an away win with both teams to score stands out here.

Both teams have scored in four of SKC’s last five away games and Colorado have scored in all three of the home games they have failed to win so far this season, so backing the visitors with goals for both sides has real appeal here.

Cincinnati take on Orlando City in the latest round of MLS fixtures as two out of form sides meet.

The Orange and Blue are winless in their last seven but they have still been tough to beat and have only lost twice during that run.  The goals have dried up for Cincinnati, however, and they have managed just one in their last three games.

Orlando have fared a little better but have lost two of their last three away games, drawing the other, and they have also struggled for goals  – having managed just two in those three road games.

As such, this looks a prime candidate for unders backers and under 2.5 goals is our best bet for this clash.

Toronto FC have found a bit of form in recent weeks after a woeful start to the season and they can pick up a point against visitors New York City.

The Reds have lost just one of their last six games after ending a six-game losing streak and have drawn their last three games at BMO Field.

New York have three wins in their last four games but all of those successes have come at home.  On the road, the Pigeons have just one win in their last five games, with two draws and two defeats.

Toronto have four draws in seven home games this season and we feel another stalemate could be on the cards this weekend.

Portland Timbers take on Real Salt Lake in a key fixture in the battle for a playoff place in the Western Conference.

Real occupy the final playoff spot, but Portland are just one point and one place behind them in eighth.

The Timbers are winless in their last three games but have remained solid at their Providence Park home with four wins in their last six games, with one draw and one defeat, while Salt Lake have lost three of their last five on their travels and we like the look of a home win in this one.

There have been plenty of exits at Charlton too but the Addicks have also recruited well and we feel they can just edge this tie against a Wednesday outfit who could take a while to bounce back after an incredibly tough season last time out.