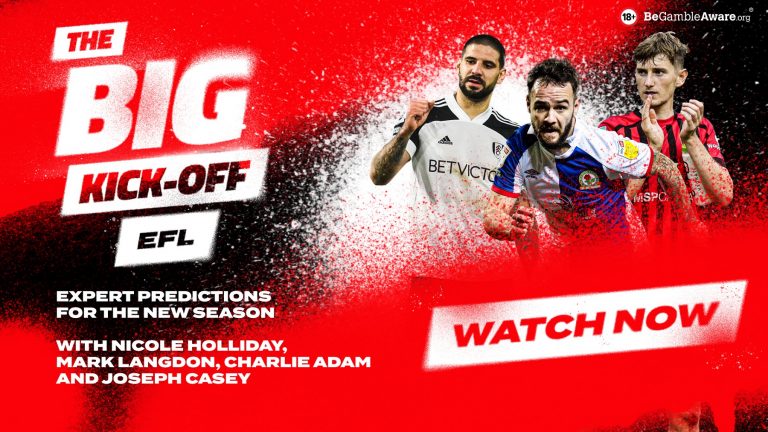 The Racing Post’s Big Kick-Off print edition was released on Wednesday but the expert team over at Racing Post haven’t stopped there, releasing two videos this week covering the EFL and the Premier League.

It’s your one-stop shop to betting on the domestic game this season, plus they cover both the FA Cup and the Carabao Cup in detail.

Check it out below and then go ahead and compare their picks to our own Premier League predictions and EFL outright selections.

We’ve picked out some of Mark Langdon’s and Joe Casey’s best Premier League bets for the upcoming season but make sure to watch the video in full to get Didi Hamann’s expert analysis as well as well as predictions from the other top European leagues and the Champions League and Europa League.

Little argument here as both Mark Langdon and Joe Casey agree with my own Premier League winner selection, backing Manchester City to retain the title despite the short odds. Next.

Joe Casey fancies Manchester United at 4/11 and thinks Solskjaer is the main thing holding them back from a title challenge, while Mark picks out his top four in order and agrees with my outright forecast of Man City to win ahead of runners-up Chelsea.

Mark and Joe both look to steer clear of the front of the market as question marks over Harry Kane’s future make him a dodgy pick. Mark picks three huge priced outsiders while Joe also opts for the longer end of the market as he picks Brentford’s Ivan Toney.

Mark and Joe both expect the promoted sides to do better than the odds are suggesting and opt for perennial strugglers Burnley as their best pick. Can Sean Dyche dig them out of a hole again?

Mark reckons Aston Villa’s loss of Grealish and relatively easy start on paper could introduce some early pressure on Dean Smith while Joe expects the newly promoted Watford to struggle going forward. Mark has an extra one in there, too, so make sure to watch the video!

Joe Casey – Watford to be the lowest scoring team

Both Mark Langdon and Charlie Adam lump for the huge price of 50/1 for Luton to shock what Mark describes as a ‘weak Championship’. Joe Casey fancies Bournemouth to return to the top flight, with nobody fancying the three relegated teams to bounce straight back up.

Both describe this as one of the most exciting leagues around with as many as eight teams targeting automatic promotion and plenty of money flying around. Mark opts against those sides flashing the cash and picks Charlton, while Joe agrees with FST’s own Gareth Freeman and picks Ipswich to lift the trophy.

A young, exciting manager and a settled squad make Forest Green Joe’s top pick for England’s fourth tier at 16/1, but Mark is opting for the vastly experienced Derek Adams of Bradford City.

This time it’s Joe’s turn to pick out a huge underdog as he backs a Brighton team that impressed in their performances last season. The Seagulls had a solid run in the FA Cup a couple of years ago and could go all the way, while Mark opts for the more familiar name on the trophy of Arsenal. A lack of European commitments and Arsenal’s strong track record in the cup make them an attractive choice.

Manchester City have won the EFL Cup in five of the last six years and each of the last four so it’s hardly a surprise to see them tipped for glory, if you can call it that. But Joe is looking further afield to other top teams with ultra-deep squads, and Chelsea at 7/1 have attracted his attention.

Want the rest of their selections? You’ll just have to watch the video above and stay tuned for the release of their Premier League picks later this week!