NBA Weekly Round Up 25th January 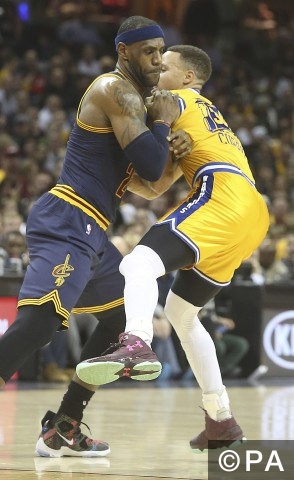 It’s been an interesting week in the NBA as plenty of things have unfolded in the past seven days. We had a rematch of last season’s NBA Finals that didn’t turn out anywhere close to what people were expecting. There’s another major showdown between a pair of the league’s top teams coming up to talk about as well.

In addition, we’ve seen a contender make a move in the front office, the starters for the All Star Game get selected and the league scrambling to determine who will be the coach of the Western Conference All Stars. The Kobe Bryant retirement tour continues as the Lakers flounder at the bottom of the Western Conference and one has to wonder if the Buss family wishes that the Black Mamba had already retired or accepted a deal to go somewhere else, either via free agency or trade. With all that said and without further ado, let’s look at the week that was in the NBA.

Warriors Rout Cavaliers in NBA Finals Rematch: When the NBA Finals went down last season and Golden State hoisted their first Larry O’Brien trophy in 40 years, many people though it came with an asterisk. After all, Cleveland was without Kevin Love for the entire series and lost Kyrie Irving in Game 1. With both of those guys healthy, most people envisioned it would have been a completely different series. While Love and Irving were both active for the Cavaliers’ 89-83 loss at Golden State on Christmas Day, fans quickly pointed out that it was just Irving’s third game back after that knee injury that took him out of the Finals.

Instead, what we got was a sickening thud.

Cleveland was clobbered 132-98 on their own floor as Golden State jumped to a 13 point lead after one quarter and a 26 point edge at the half. Stephen Curry finished with 35 points in 28 minutes, NBA Finals MVP Andre Iguodala had 20 off the bench and Draymond Green narrowly missed a triple-double with 16 points, seven boards and 10 assists. James finished with 16 points, five rebounds and five assists but the other two key components delivered next to nothing. Love finished with three points and six boards in 21 minutes while Irving had eight points on 3 of 11 shooting. With the loss, Cleveland fell to 0-3 against Golden State and San Antonio this season. That blowout also led to our next tidbit.

Cavaliers Fire David Blatt: Before the 2014-15 season began, the Cavaliers were looking for a new head coach. They weren’t sure if LeBron was going to come back home or stay in South Beach and were pursuing Gordon Hayward of the Utah Jazz as a potential big free agent target. Instead, the team went out and hired David Blatt, who had led Russia to a gold medal in the 2007 FIBA EuroBasket championships and a bronze medal in 2011. Blatt also led Russia to a bronze medal in the 2012 Summer Olympics in London, won the EuroBasket championship in 2014 and won the Israeli Cup six times.

Blatt was not a rookie coach by any stretch of the imagination but he was treated like one in the NBA. The concept that he hadn’t dealt with the egos and attitudes of NBA players and their sense of entitlement was one that was hung on him as a negative. Still, Blatt led the team to the NBA Finals last season and the mentality was that if the team had a better bench group and avoided injuries, they may have won the title. The fact that the team gutted it out to a sixth game in the NBA Finals despite being James and the scrubs was impressive.

This season, Cleveland led the Eastern Conference at the halfway point of the season as the team was 30-11. Still, that wasn’t good enough for owner Dan Gilbert, who fired Blatt on Friday, saying that he wasn’t the “right fit” for the organization. In his stead, assistant Tyronn Lue, who was in the running for the head coaching job when Blatt took over, was appointed head coach and given a three year deal. The decision didn’t pay immediate dividends: Cleveland shot just 37.2 percent from the floor and 4 of 24 from three point range in a 96-83 loss at home to Chicago. Afterwards, Lue said his team was “out of shape.”

It remains to be seen what happens with the Cavaliers but one thing is clear: a title is what’s expected. It may be unfair for Lue to inherit that situation given how tough the Western Conference’s elite are.

Who Will Coach the West In the All Star Game?: This scenario is one that popped up this week for the first time in a while as to who would coach the Western Conference All Stars. The rule, which was put in place back in the 1980s when Pat Riley and the Lakers were dominating the standings, is that the same coach can’t coach in the All Star Game in back to back years. Steve Kerr coached the West last season and with the Warriors atop the conference standings again, the league has to decide who will step up and coach the team.

Granted, Kerr just returned behind the bench earlier this week after missing the majority of the season after back surgery. That meant assistant coach Luke Walton was the de facto head coach for the first 43 games. While the NBA has decided not to change their stance on assistant coaches filling in as far as picking up wins or losses, Walton was named the NBA’s Western Conference Coach of the Month for October/November. The team was 39-4 under Walton’s guidance. The league is debating whether Walton will be able to represent the conference as the head coach in the All Star Game. If not, that role could fall to Gregg Popovich of the Spurs.

Western Conference Showdown: The top two teams in the league will do battle Monday as the Spurs, who are 38-6, will travel to the west coast to face the 40-4 Warriors in a showdown at the Oracle Arena. It will be a battle of the old school Spurs with their aging veteran core with Manu Ginobili, Tony Parker and Tim Duncan along with guys like Kawhi Leonard and Lamarcus Aldridge, who are in their primes, taking on the backcourt of Curry and Klay Thompson along with the do everything forward Green. It’ll be the cerebral Popovich matching X’s and O’s with the energetic and animated Kerr. It should be nothing short of a classic.

Of course, the Spurs won’t be at full strength in this contest as Popovich already announced that Duncan will miss the game with knee soreness. Still, San Antonio is one of the few teams in the league that can match depth with the Warriors and will give Golden State all they can handle in what should be the game of the week, if not the season to date. Expect a highly entertaining contest between two extremely talented, deep teams with more than bragging rights at stake.