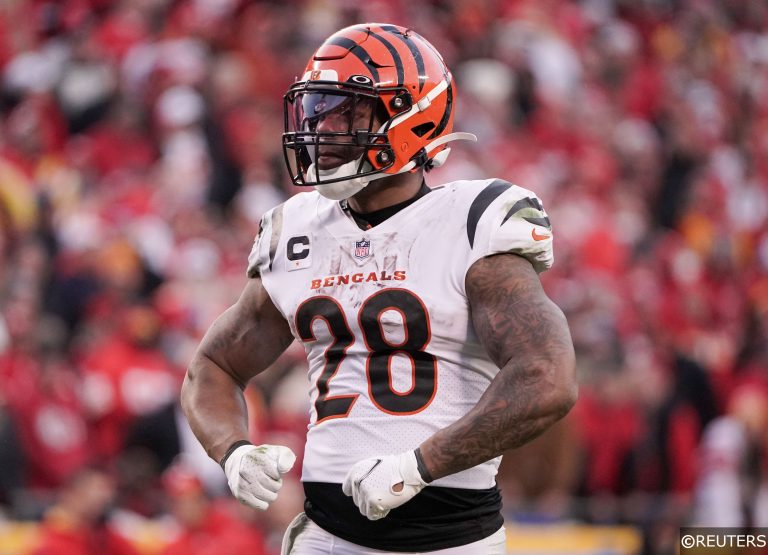 The start of the 2022/23 NFL season is just days away and after combing through the outright markets NFL expert Chris Rivers is back with his eight picks to win the divisions, combining into one huge 219/1 accumulator!

Of course, we’ll have tips for all the action this week so make sure to keep an eye on our NFL predictions page.

Anything other than a third straight AFC East title for the Buffalo Bills would be a major surprise. The Bills were already Super Bowl contender before they added Von Miller to their defence and look in a class of their own in this division. The Miami Dolphins finished last season strongly and have an impressive roster, boosted by adding wide receiver Tyreek Hill from the Chiefs, making them playoffs contenders.

The New England Patriots’ off-season leaves them struggling to make the playoffs on paper, while the New York Jets rebuild has been hamstrung by an injury to quarterback Zach Wilson.

There’s been a different winner of this division in each of the last three years with the Cincinnati Bengals shocking everyone by claiming top spot last season. The Bengals are contenders again with a loaded offence complemented by an improving defence.

They will need to work hard to hold off a resurgent Baltimore Ravens, who could go from worst to first in the division if they can avoid a repeat last season’s injury curse. Pittsburgh’s defence makes them a tough proposition but a limited offence could hamper their chances, while Cleveland’s hopes were likely dashed by quarterback Deshaun Watson’s 11-game suspension.

The Jacksonville Jaguars and Houston Texans could spring a few surprises but are unlikely to challenge for a division which looks to be the Indianapolis Colts’ for the taking. Matt Ryan is the Colts’ fourth different quarterback in the last four years but is an upgrade on his predecessor Carson Wentz and has some strong offensive weapons to call upon, most notably last season’s leading rusher Jonathan Taylor.

The Tennessee Titans looked primed to regress after double-digit win seasons each of the last two years but with heavy-duty running back Derrick Henry, they should keep the Colts honest.

An influx of talent makes this the most competitive division in the NFL where every team has a shot at claiming top spot. The Chiefs are not the same side without Tyreek Hill and could lose their grip on the AFC West, with the LA Chargers primed to jump into first place after bringing in Khalil Mack and J.C. Jackson to boost their defence.

Russell Wilson could prove the missing piece of the puzzle in Denver, while the Raiders are a wild card prospect having signed top receiver Davante Adams.

The Philadelphia Eagles are expected to go well this season after a surprise run to the playoffs with the strength of both lines, the dual-threat ability of Jalen Hurts and addition of AJ Brown making them the pick to knock off reigning champions Dallas.

The Cowboys are lacking in a few key positions, while the New York Giants and Washington Commanders don’t have the offensive talent to seriously contend.

Green Bay has had its way with this division the last three years and while it will be tough to topple them, the Minnesota Vikings and Detroit Lions can at least give them a run for their money.
The Vikings’ talented roster has badly underperformed the last two years but a change of coaching staff could bring that to an end, while head coach Dan Campbell has the Lions trending up. The Chicago Bears are more likely to earn the number one pick in the draft than NFC North crown.

The Carolina Panthers and Atlanta Falcons are unlikely to have winning records in 2022, meaning the NFC South is between rivals Tampa Bay and New Orleans. The Bucs roster is still stacked full of talent and only a fool would write off Tom Brady, even at age 45, so the Saints have a big job on their hands.

New Orleans has made some nice additions this off-season though and look to be going all in on this year so are one to keep an eye on.

The Rams won a competitive NFC West last year but may find retaining their title a slightly easier job with all three of their rivals having taken a step back. LA have kept most of their big-hitters and head coach Sean McVay isn’t the type of boss to let his team rest on their laurels.

Trey Lance could be a future NFL superstar for the San Francisco 49ers but the sample size is too small to know at this point. The Arizona Cardinals have proven they can’t last the pace, while the Seattle Seahawks are unlikely to contend.