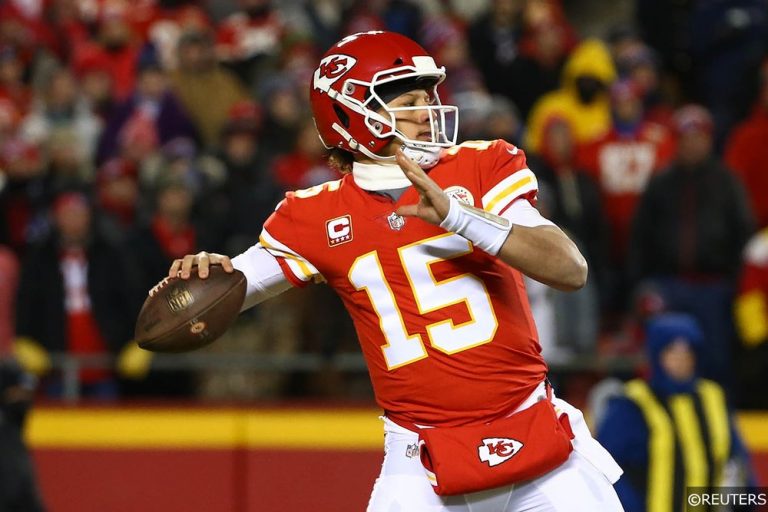 Offense, offense, offense! Whilst the saying ‘defense wins championships’ still very much holds sway, at least the first quarter of the season is often about high-scoring offenses strutting their stuff while defenses play catch-up, so we’ll be concentrating purely on ‘overs’ for Week One of the season, with plenty of the big-named, familiar faces expected to get what they hope will be a season that leads to a Super Bowl victory off to a red-hot start.

Patrick Mahomes is a man who knows a thing or two about Super Bowls, already appearing in two in his young career.

Fast starts and tame finishes, meanwhile, have been a theme of Cardinals coach Kliff Kingsbury’s time in the desert, and this one promises to be a shootout, boasting the highest points over/under (53.5) of the weekend.

Kingsbury coached Mahomes at Texas Tech but no amount of inside knowledge about his college QB can be expected to slow the former MVP, who will be out to prove a point after a ‘down’ season in 2021 and the loss of his star wide receiver Tyreek Hill to Miami this offseason.

In his four years as starter, Mahomes has averaged 295.5 passing yards and 3.25 passing touchdowns on the opening week of the season, so expect him to come out slinging it in the benign conditions of State Farm Stadium.

Questions abound in New England, with Tom Brady long gone and architect behind many of their great offenses, Josh McDaniels, now in the big chair in Las Vegas.

The Dolphins, however, are trending in a different direction, with rookie head coach Mike McDaniel bringing fresh ideas and hopefully some much needed explosion to a team that has been defense oriented in previous seasons.

One player who will help with that ‘explosion’ is Tyreek Hill, the star receiver having joined from Kansas City, but don’t forget about former 49ers running back Raheem Mostert, a speedster himself in his time under McDaniel in San Francisco.

Mostert is listed as number two on the depth chart, behind former Cardinal Chase Edmonds, but Edmonds carries a nagging groin injury into the game, and Mostert could be the one to expose what was a below-average Patriots run defense last season.

The Bucs and Cowboys served up a week one thriller last season, Tampa emerging victorious 31-29.

The NFL will be hoping for more of the same, giving this game prime slot of the weekend on Sunday Night Football, but there’s no doubting both squads are diminished in 2022.

It’s tricky to call which way this one will go, but one thing that’s certain is that with Amari Cooper now in Cleveland, CeeDee Lamb is the undisputed number one wideout for America’s Team.

Lamb went for over 1,100 receiving yards in 2021 and can get what looks sure to be a strong challenge for the 2022 receiving title off to a strong start here.

These two served up a ‘win and in’ thriller in week 18 last season, the Raiders emerging victorious, but Chargers quarterback Justin Herbert’s elite play was the big takeaway from the game and he enters 2022 as a leading MVP candidate.

This promises to be a shootout in the calm of SoFi Stadium, and Herbert’s go-to man from that week 18 clash, Mike Williams (9 catches for 119 yards and 1 touchdown), can again expect to see his share of the ball.

Williams had a breakout season in 2021 and can expose a suspect Raiders defensive backfield.

Head coach Kyle Shanahan, although now without the architect of the 49ers offense in recent years, Mike McDaniel, who is in Miami, will be eager to take as much off of Lance’s plate as possible, and that means leaning heavily on second-year running back Elijah Mitchell.

Mitchell goes against a diminished Bears defensive line and went off against them in a 33-22 win at Soldier Field last season, taking 18 carries for 137 yards and a touchdown, one of 11 games last season (including playoffs) in which he carried the ball at least 17 times.

The Packers have ruled the NFC North during the Aaron Rodgers era, but star wide receiver Davante Adams is in Las Vegas now, leaving distinct uncertainty at the wideout position.

Minnesota, meanwhile, has a new head coach in Kevin O’Connell, bringing fresh offensive ideas to a team in need of a change after things got stale under Mike Zimmer.

The Vikings boast an array of weapons on offense, with Justin Jefferson, at wideout, and Dalvin Cook, running back, being two of the best at their respective positions in the league.

The Vikings beat the Packers 34-31 at home in week 11 last season and could get the better of their bitter division rival once again, with Cook expected to lead the way with a busy workload on the ground – had at least 17 carries in 9 of the 13 games he played in last season.