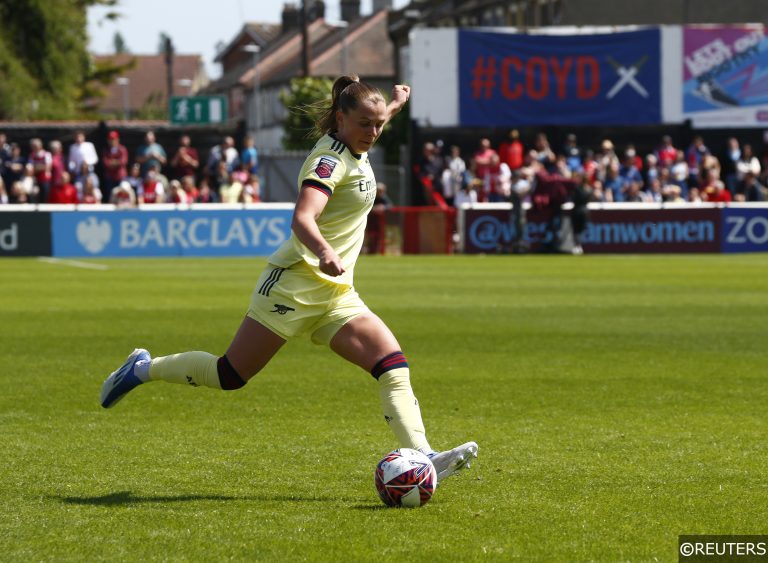 The Women’s Super League begins this weekend and there is heightened interest in the competition after the Lionesses triumphed at Euro 2022.

Racing Post expert Ian Wilkerson has provided us with his tip to win the league outright, and he thinks Chelsea’s three-year reign of dominance could be coming to an end.

England’s ground-breaking success at Euro 2022 means this year’s Women’s Super League will be the most high-profile ever and it looks set to be an intriguing battle for the crown.

Favourites Chelsea still remain the team to beat after four successes in the last five years, but Emma Hayes will know her team cannot afford to be complacent, particularly as she strives for a first Champions League triumph.

The London outfit had a disappointing European campaign last term, being knocked out of the group stage after losing in the final to Barcelona the previous season.

And Hayes has built a formidable team which has been boosted by the signature of Canada defender Kadeisha Buchanan, to prove that they are not just an attacking team.

They should be boosted by a return to fitness for England’s Fran Kirby after a stop-start season last year, and the Lioness tends to bring out the best in Australia striker Sam Kerr, who was the division’s top goalscorer last term with 20 goals.

However, there is a sense that they are being caught up by Arsenal, who were just a point in arrears at the end of last term and beat Chelsea 3-2 in an entertaining clash at the Emirates on the opening weekend of the campaign.

A shock defeat to relegated Birmingham put paid to their title ambitions but there were definite signs that they had improved under manager Jonas Eldevall as they took eight points off Chelsea and third-placed Manchester City during the season.

They have also been boosted by the news that Vivianne Miedema, the greatest goalscorer in the league’s history, has committed her future to the club as both Barcelona and Paris Saint-Germain were rumoured to have been in for the Dutch striker.

But Eldevall has been able to boost his forward options by signing Sweden’s Lina Hurtig and he already has Euro 2022 golden boot winner Beth Mead in his squad.

So, at the prices, with Arsenal having improved dramatically from the season before last when they finished eight points behind Chelsea, they represent some decent title value at 2/1.

The two Manchester teams are the only other WSL teams who are shorter than 100-1 for glory and United are capable of making a big impression and could be the club more likely to challenge the two London outfits.

Promising defender Maya Le Tissier (no relation to former Southampton midfielder Matt) has joined from Brighton and they could gain a head of steam in the opening weeks of the season, as they will be six games into the season before they face a double test against Chelsea and Arsenal.

Alessia Russo and Ella Toone will be looking for good seasons after playing key roles in the Lionesses’s triumph and, with three places up for grabs in the Champions League, that should provide plenty of motivation.

We will probably have more of an idea about the sort of season Manchester City are going to have after they play Arsenal in their opener.

Gareth Taylor’s side have already been knocked out of the Champions League by Real Madrid and they have moved swiftly to sign promising Australia forward Mary Fowler from Montpellier and defender Laia Aleixandri from Atletico Madrid.

Steph Houghton is back after a long-term Achilles injury and with England striker Ellen White having retired, it may take time for them to settle.