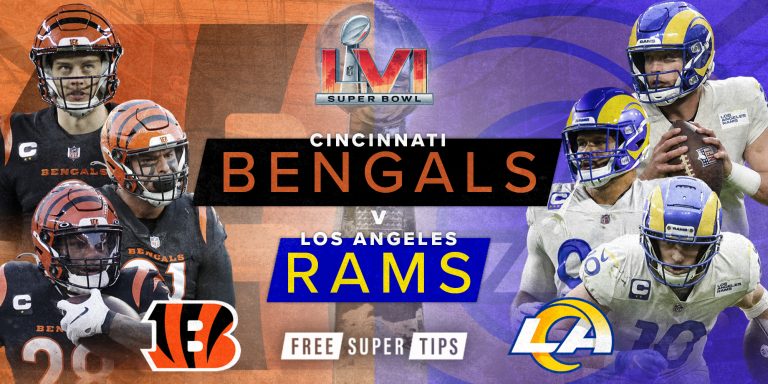 The line-up for Super Bowl 56 is complete and it’s one that few would have predicted with the Cincinnati Bengals going to The Show having started the season as 150/1 outsiders. The Bengals are heading to SoFi Stadium in Los Angeles to face the Rams, who are bidding to become the second team in NFL history to win the Super Bowl on home turf.

In the shadow of Hollywood, the Rams are 20/37 favourites to deny the Bengals what would be a fairytale ending to the most unlikely of seasons. Cincinnati have revelled in the role of the underdog though and can’t be discounted at 33/20, especially after their AFC Championship win at the Kansas City Chiefs.

Bengals rip up the script

A franchise’s fortunes can change quickly in the NFL but even by the league’s standards, Cincinnati’s transformation from the worst team in the NFL just two years to kings of the AFC has been remarkable. First, they finished top of the ultra-competitive AFC North with a 10-7 record before knocking off the Las Vegas Raiders in the wild card round of the playoffs to end a 31-year wait for a postseason win.

A road victory over the top-seeded Tennessee Titans followed before the crowning glory – a come-from-behind win against the Chiefs at Arrowhead. At 21-3 down in the second quarter, it looked like the end of the road for the Bengals, only for them to mount a stirring second-half comeback, finishing the job in overtime as they triumphed 27-24.

While the Chiefs’ superstar quarterback Patrick Mahomes buckled under the pressure of taking his team to the Super Bowl, his Bengals counterpart couldn’t have been more relaxed.

When they went 2-14 in 2019, the Bengals smartly used their number one draft pick to select Joe Burrow and he has been the catalyst for change at the franchise. Burrow appears unflappable, overcoming a poor start to the AFC decider to lead his team to victory.

Just a year after having major knee surgery and in only his second year in the league, Burrow is on the cusp of Super Bowl success. There’s no doubt Burrow is a special talent but the Bengals have surrounded with him with the weapons to succeed too in Ja’Marr Chase and Tee Higgins, two top-quality receivers.

There’s certainly enough talent on the Cincinnati offence to challenge an impressive Rams defence, one that’s led by Aaron Donald and Von Miller. Those two have wreaked havoc during the Rams’ run of eight wins in the last nine games and a Bengals offensive line that’s given up 63 sacks this year will have its hands full.

Rams on a roll

Donald and the defence made the key play in the Rams’ NFC Championship win over the San Francisco 49ers, forcing Jimmy Garoppolo into a game-ending interception. However, it was the offence who had dragged the team back into the game after finding themselves 17-7 behind in the fourth quarter.

On the one year anniversary of his arrival in LA, quarterback Matthew Stafford showed why the Rams gave up multiple draft picks to bring in to California as he held his nerve to lead three consecutive scoring drives in the final quarter. Much like Burrow, Stafford has some nice weapons around him to help him succeed, including the NFL’s leading wide receiver Cooper Kupp and Odell Beckham Jr.

The Rams offence are well placed to make amends for their last Super Bowl appearance when flopping badly in a 13-3 loss to the New England Patriots in the 2018 season. Sean McVay was the head coach that day as the Rams missed out on their second Super Bowl title and remains in charge, putting his offensive mind to good work to steer LA to the NFC West title and playoff wins over the Cardinals, Buccaneers and 49ers.

However, McVay has a habit of tripping up his team with some questionable decisions, opening the door to the opposition. Their failure to put teams away gives hope to a Bengals team that have demonstrated their resilience on more than one occasion this year.

Chasing the franchise’s maiden Super Bowl title in their first appearance in the big game in 33 years might prove too much for some quarterbacks but Burrow has proven he’s not just any quarterback. With the Rams going 2-5 against the spread in their last seven playoff games as a favourite and the Bengals covering the handicap in seven straight games, there’s every reason to believe Cincinnati will at least keep this close.

To do that they’ll need Burrow at the top of his game and if he can outperform Stafford then his odds to be named Super Bowl MVP appeal with 31 of the last 56 winners having been QBs.

In the Mixer: Champions League top scorer bets from our experts